After years of technology development and project planning, heavy-lift specialist ALE has completed the successful lift of the 42,780-metric ton (47,156-ton) topsides for the Berkut platform, an operation that the UK-based company claims is by far the heaviest such jacking operation in history. 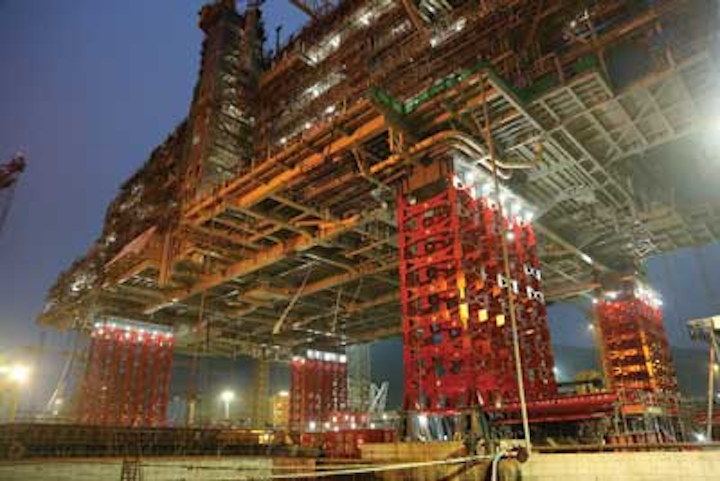 After years of technology development and project planning, heavy-lift specialist ALE has completed the successful lift of the 42,780-metric ton (47,156-ton) topsides for the Berkut platform, an operation that the UK-based company claims is by far the heaviest such jacking operation in history.

The 11-hour procedure took place at the Daewoo Shipbuilding and Marine Engineering (DSME) yard in Korea using ALE's Mega Jack system configured for a lift capacity of 60,000 metric tons (66,139 tons). Scheduled to leave the yard in May 2014, the Berkut platform will be installed on a concrete gravity-based structure at the Arkutun-Dagi field, part of the ExxonMobil-operated Sakhalin-1 project in the Sea of Okhotsk offshore Russia.

Berkut is expected to be the country's largest oil and gas production platform when it goes into service next year. The structure is designed to operate year-round and to withstand extreme winter temperatures, seismic shocks, seas up to 16 m (52 ft), and sea ice that can be as much as 2 m (6.5 ft) thick. Water depths at Arkutun-Dagi range from 15-40 m (49-131 ft).

"This was the first ever job of this size," Kompier said. Although the onsite crews had been through extensive training and conducted multiple simulations, the final stage of the 24-m (79-ft) lift was briefly delayed so that workers from other shifts could gather to watch. "They all wanted to see the last move, because it is an exciting thing - it's an unbelievably big platform."

The concept for the Mega Jack system can be traced to 2005. "We saw the market changing to bigger platforms, and saw that the equipment in the market at that time was not sufficient to cover the big projects that were coming in the future," he explained.

While the system has been used on some civil engineering projects, "oil and gas was our first focus," Kompier added. What sets the Mega Jack apart, he says, is that operations are conducted at ground level, giving the system stability and improving safety by eliminating the need to deploy workers at heights.

"We control the jacks very accurately by a computer system, which allows us to create stability at ground level. All things that have to be done by people are on the ground level, so there's no work at heights - just inserting the beams at ground level, sliding them into position, then conducting a stroke jackup of 1.1 m, or close to 4 ft." The maneuver is repeated until the lift reaches the desired height, and the entire procedure is conducted from a single control room and monitored throughout by strategically placed video cameras.

Kompier commented: "Safety was the main driver in the design. And the second thing is to have stability on ground level so that you don't have to do a lot of work on height prior to the jacking or after the jacking."

Establishing stability from the jacking foundation eliminates the need for large bracing structures, and the welding and cutting operations done at heights to construct them, he says.

For the Berkut job, ALE used 48 jacks divided among four towers, with each tower consisting of three adjacent stacks for a total lifting capacity per tower of 15,000 metric tons (16,535 tons). Planning began about three years before the lift, when DSME approached the company about the job, including the load-out of the platform and ballasting the transport barge. ALE brought the Mega Jack proposal to ExxonMobil, and an order was signed in 2011. An extensive period of engineering and planning ensued, including movement and stability analysis, risk assessment, and hazard mitigation. "This has been an intense two-year period," he noted. "We're fortunate to have a great team with experience in different fields."

Two weeks before the procedure, ALE conducted a small lift to allow DSME to remove construction supports and do some touch-up work in areas that were inaccessible while the supports were in place.

Last summer, VOSCF, a joint venture between Sovcomflot and Van Oord, installed the 160,000-ton gravity-based structure (GBS) in 35-m (115-ft) water depths offshore Sakhalin Island. The GBS was designed and built by Kvaerner in the Russian port of Vostochny, in Nakhodka. The Sakhalin-1 partners - Exxon Neftegas (30% operated interest), Rosneft (20%), SODECO (30%), and ONGC (20%) - expect first production from Arkutun-Dagi in 2014. The Sakhalin-1 project includes the Chayvo and Odoptu fields, both in production; with Arkutun-Dagi, total recoverable resources have been put at 2.3 Bbbl of oil and 485 bcm (17 tcf) of gas.

Next May, ALE plans to pull the completed Berkut platform out of the DSME yard for its voyage to Sakhalin aboard a Heerema-supplied barge. "We will use our ballasting system to keep the barge at a very accurate level with the quayside," Kompier said. "This was a big step," he says of the lift. "But the next step, the load-out of 50,000 tons, is also big."