Drilling contractors maintain a portfolio of rigs specific to their business strategy and ability to access capital markets. 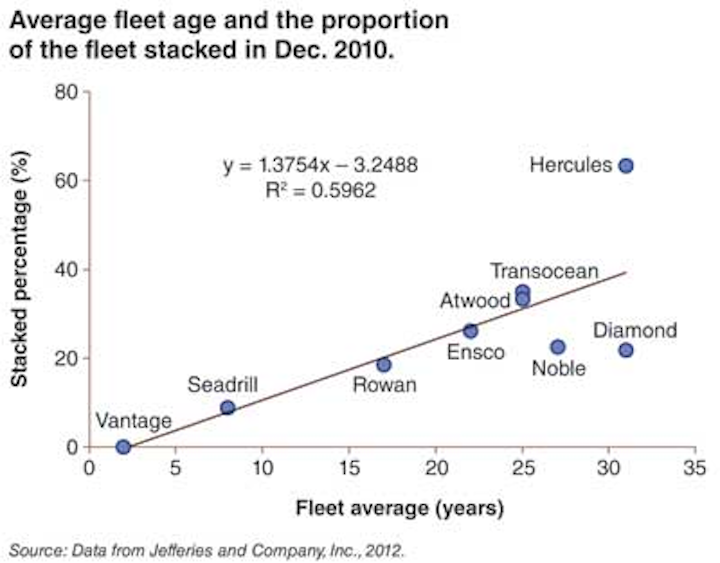 Drilling contractors maintain a portfolio of rigs specific to their business strategy and ability to access capital markets. Generalists maintain a geographically and technically diverse fleet, while specialists are smaller firms that cannot simultaneously compete in all regions and markets, and thus specialize to build customer relationships.

This second of a three-part series describes how firms specialize, and examines their newbuild strategies. Constructing a newbuild rig is a high-risk investment, and contractors undertake various strategies to reduce this risk.

Demand for drilling services varies across geographic regions and water depth, and a diverse fleet allows contractors to respond to changing industry conditions. A fleet diversified by rig type and specification is able to adjust to market upswings and weather industry downturns. High quality and new rigs generally continue to operate (albeit at a lower day rate) during industry downturns. Companies that provide commoditized services (e.g. shallow water jackups) are exposed to greater competitive pressures and lower barriers to entry.

Transocean, Noble, Diamond, and Ensco are generalists active in a large number of markets and regions, while most other firms specialize to a greater degree. Seadrill is the only large-cap specialist and focuses on the high-spec markets in the North Sea, Southeast Asia, and Brazil. All large-cap drilling contractors received a majority of their 2011 revenues from the floater markets, and despite significant jackup fleets, the floater segment accounted for 85% and 93% of revenues for Transocean and Diamond, respectively. For Noble, Ensco, and Seadrill, floaters accounted for approximately 60% to 65% of revenues. 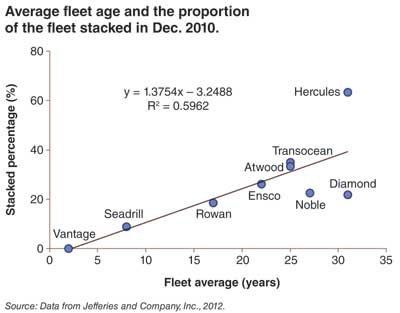 Drilling contractors concentrate assets in regions to capitalize on economies of scale through the reduction of administrative costs, build customer and governmental relationships, and match fleet and regional characteristics. There are advantages to this approach, but political risk increases with concentration, and to manage this risk, geographic diversity may be a business strategy.

Due to contractor's regional concentration, a small number of E&P firms frequently make up a large proportion of a contractor's revenue. This can create risk for the firm, because the loss of a single client can eliminate a major source of revenue. Consistent with the importance of the Brazilian market to firm revenues, Petrobras is a significant customer for several firms, including Diamond.

National oil companies and majors are the largest customers for nearly all firms consistent with their size. Transocean is particularly diverse and its largest customer (BP) only accounts for 10% of revenues. The importance of NOC customers, including Petrobras, Pemex, and Saudi Aramco, is notable. Given the increasing role state-owned drilling contractors play in the market, these NOCs may shift toward in-house drilling contract services in the future. 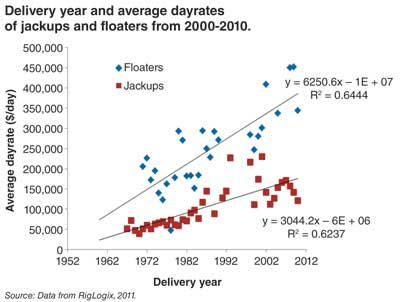 Drilling contractors are differentiated by the age of their fleets. Firms with old fleets are more likely to stack rigs, while firms with young fleets are more likely to experience high utilization. Hercules depends heavily on United States jackup revenues and the decline in the GoM shallow-water market has led to a high degree of unutilized rigs. Diamond is more diverse with more upgraded rigs in jackup and floater markets and broader customer and geographic base.

In an analysis conducted by the authors, all jackups or floaters delivered in a given year were grouped together and their day rates averaged over the 2000-2010 period. There was a significant correlation between rig age and average day rates, suggesting that firms that operate newer rigs are likely to receive higher day rates than firms that specialize in older rigs.

Transocean, Noble, Ensco, and Diamond are the only drilling contractors to own both standard and high-spec jackups and floaters. Active and stacked rigs are included in the count, but rigs under construction are not. High-specification jackups are defined as those capable of drilling in 350 ft (107 m) or greater water depths, or capable of operating in harsh environments. High-specification floaters are capable of operating in at least 7,500 ft (2,286 m) of water or in harsh environments. In contrast, all of Seadrill's units are high-spec, and nearly all of Hercules' units are standard jackups. 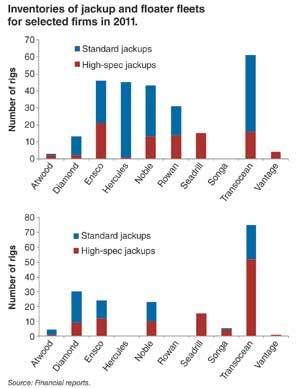 Net revenue is an important determinant of competitiveness and ability to win work. For Transocean, ultra-deepwater and harsh environment floaters are particularly profitable due to high utilization, and a large difference between day rates and operating expense. High-specification jackups were the only market segment with a negative expected net revenue in 2011. Diamond's deepwater fleet experienced higher day rates than its ultra-deepwater fleet, and was Diamond's most lucrative market. Rigs in the mid-water market generated approximately $40 million per rig for both firms, while the jackup segment was only marginally profitable.

Firms invest in newbuilding when the estimated net cash flows from the asset exceed investment criteria and capital budgets and credit markets allow investment. Newbuilding represents a significant capital expenditure, while future day rates and utilization are uncertain. Therefore, newbuilding is a high-risk investment and firms undertake strategies to reduce this risk. Three strategies have been traditionally espoused by industry: initial contract, price discount, and speculation. Additionally, in some cases, an E&P firm will enter into a joint ownership arrangement for a newbuild rig. In the private sector, this is relatively rare and is limited to high-risk projects such as Shell's construction of an Arctic drillship with Frontier Drilling. Among state-owned drilling contractors and NOCs, such arrangements are more common.

Under an initial contract strategy, contractors require an initial long-term contract from an E&P firm before investment in order to secure cash flows during the early life of the rig. Bob Rose, former CEO of Global Marine, summarized the strategy in this way: "No newbuilds without a user contract in hand." Without an initial contract, a drilling contractor may experience a negative net cash flow in the first years after a rig is delivered, and this can have a significant negative impact on the profitability of the investment.

Proponents of an initial contract approach argue that building speculatively provides a signal to E&P firms that rig availability will increase in the future, which reduces the motivation of E&P firms to commit to long-term contracts. Additionally, building without an initial contract adds supply that is not demanded, which may lead to industry-wide reductions in day rates. Transocean is the largest firm in the industry and the most likely to be impacted by fleet-wide reduction in utilization or day rates. As a result, it is the primary advocate of the initial contract approach. 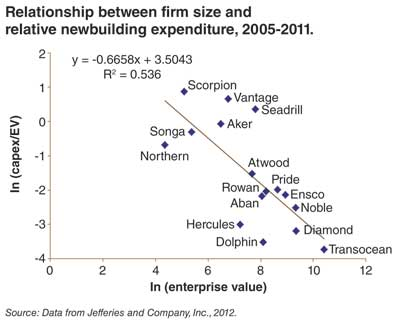 Under a price discount strategy, firms invest counter-cyclically during periods of low newbuild prices to reduce the magnitude of the risk. Stedman Garber, former CEO of Sante Fe, summarized the position thusly: "Counter-cyclical is the best time to build, contract or not." The goal of a price discount strategy is to minimize cost rather than attempt to match supply and demand, and proponents of a price discount strategy argue that the benefits of an initial contract do not justify higher capital costs. Lower capital costs allow companies to be more competitive in the long run because the capital cost is locked in for the life of the rig. While there is a risk that the rig will be under-utilized after delivery, it is likely that the newbuild rig will be utilized since they are preferred in the market, but at the cost of utilization and day rates elsewhere in the fleet.

During periods of high utilization and day rates, firms enter into newbuild contracts without an initial contract with the expectation that the rig will win work during the construction period. This is a high-risk strategy because there is a risk that the rig will be unutilized or utilized at a low day rate after delivery. During newbuild cycles, speculation is the dominant strategy, and since newbuild cycles are the primary source of fleet expansion, speculative newbuilding is an important source of new rigs. Price discounting is differentiated from a speculative strategy in that proponents of a price discount strategy would not build speculatively during the peak of a newbuild cycle. Thus, price discounting is a popular strategy only at the beginning of a newbuild cycle. As of January 2012, 78% of jackups, 65% of semis, and 62% of drillships under construction had been ordered without an initial contract.

The data suggest that as the size of the firm increased, the proportion of firm value invested in newbuilding expenditures over 2005-2011 decreased. Over the recent newbuilding cycle, large firms such as Transocean and Diamond have invested relatively little in newbuilding, while small and mid-sized firms such as Scorpion, Vantage and Seadrill have invested heavily. Instead, Transocean has used cash to finance acquisitions which is an alternative strategy to grow and diversify their fleet, while Diamond typically pays large dividends to shareholders.

Editor's note: This article is the second in a three-part series by Mark Kaiser and Brian Snyder on the offshore contract drilling market.