Progress in drill bit design is being made on all fronts. Improvements range from major design changes to better manufacturing techniques. 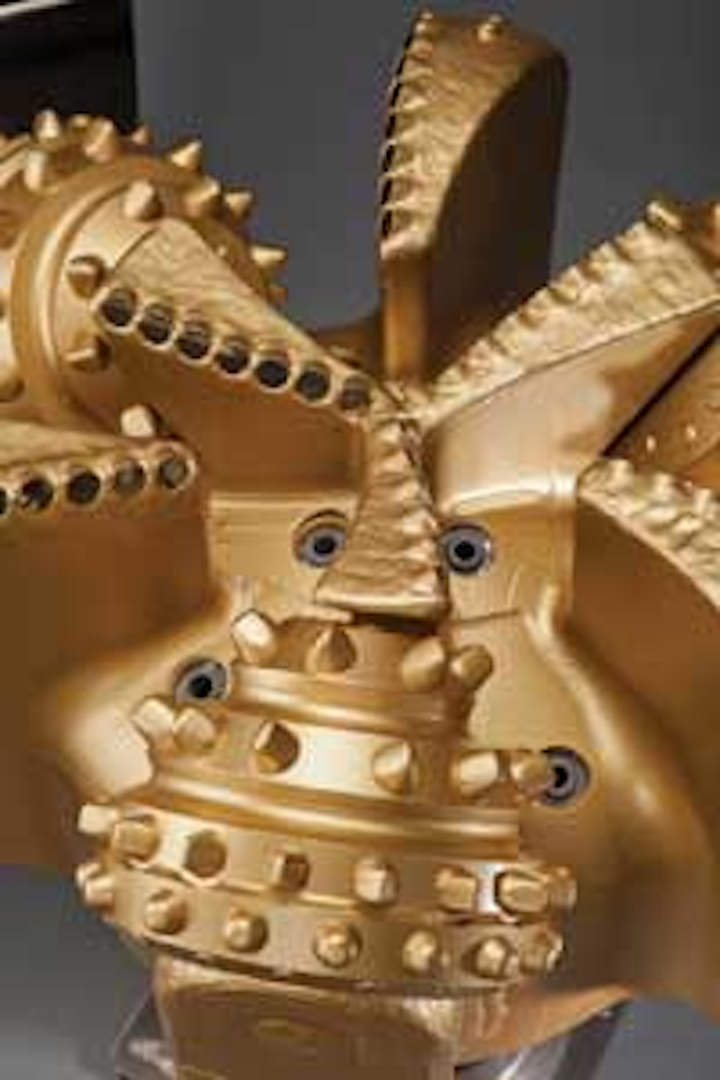 Progress in drill bit design is being made on all fronts. Improvements range from major design changes to better manufacturing techniques. Some target niche markets seeking to solve specific problems, others have broader objectives. Some aim to improve penetration rates; others seek to improve longevity. Operators are the ultimate beneficiaries, because they get better quality boreholes drilled in less time, reducing rig time costs while improving time-to-market.

With a new hybrid design, Baker Hughes' Kymera drill bit seeks to merge the benefits of polycrystalline diamond compact (PDC) bits with those of roller cone technology. Targeting transition zones where hard streaks are interbedded with those of normal compressive strength, the dual-action cutting structures of the Kymera bits increase penetration rate (ROP) while reducing weight-on-bit requirements. According to the company, this gives better directional control and steerability. Most importantly, the new design drills with less axial and torsional (stick-slip) vibration, which enhances stability, bit life, and drilling efficiency.

Results to date have exceeded expectations, with longer single bit runs in hard and interbedded applications. In Bolivia, ROP increased by 460% while drilling an extra 270% of footage over previous performance in the area, saving more than $3 million. A significant benefit of increased bit life is the elimination of trips and reduced vibrations. When nonproductive time (NPT) is reduced in big chunks by fewer trips, this transcends ROP as the major contributor to drilling efficiency and cost reduction.

Smith Bits, a Schlumberger company, has introduced its new Stinger conical diamond technology. This feature consists of a very hard, conical diamond element pointed straight down at the rock and located at the center of the bit. Because the rotational velocity of conventional PDC cutters decreases with their proximity to the center of the cutting structure, they are least effective at removing rock from the center of the borehole, especially in hard formations. The Stinger solves this problem by crushing the rock at the bit center rather than trying to scrape it. Bit designers shorten the blades that hold the PDC bit's low-velocity center cutters. The absence of these cutters allows a stress-relieved column of rock to develop while drilling, which the center-placed Stinger element continuously crushes and fractures, thereby improving drilling efficiency. Additionally, the Stinger helps to minimize bit instability. This improves borehole quality and reduces stress on drillstring components, increasing BHA reliability. In laboratory testing, a 70% increase in cutting efficiency was obtained compared with conventional bit designs.

Stinger technology can be applied to any fixed cutter bit design. Recently, a Smith Bits SHARC bit with Stinger technology delivered 46% improved ROP over that experienced in offset wells drilling extremely hard, abrasive strata. The stinger element created a stress-relieved rock column immediately in front of the bit's epicenter, improving the cutting efficiency of center cutters. In a tough transitional formation with hard sandstone stringers whose unconfined compressive strength ranged between 25,000 psi and 30,000 psi, a Stinger-equipped PDC bit increased ROP 14% in a well being drilled with a positive displacement mud motor and 1.5° bent sub. Even though in rotation mode the stinger element was describing a circular path, its tough diamond exterior allowed it to crush the rock ahead of the center cutters without problems. Weight-on-bit ranged from 30,000 lbf to 50,000 lbf in the drilling process, which would ordinarily cause excessive wear on center cutters, but the Stinger-equipped bit was able to mitigate the wear by pre-crushing the rock.

A new application for hardened elements is found in Varel's EdgeGuard treatment of its roller cone bits. Applicable to all of the company's roller cone line, the treatment adds hardened elements to shirttail bits that protect both the bottom and leading edges of the shirttail. This significantly adds to bit life while protecting bearing and seal areas. Varel has added consistency and speed to its custom design capability with its new SPOT-DN software platform. Making a major improvement in its previously successful SPOT program, the company says that the SPOT-DN program can integrate wireline log data to produce simulated performance models of proposed bit designs. By focusing on specific well objectives, applications, and drilling systems, Varel engineers can connect specific design changes with their implication on drilling efficiency deliverables. Virtually any condition can be simulated using the new platform, saving time and producing bit designs tailor-made for a specific application. According to the company, the new software has already paid off in improved designs of its steel-body bit line with better torque management, improved directional control and faster ROP. Bit stability has been improved leading to reductions in destructive vibration that robs the bit of efficiency.

Heart of the market

Halliburton's MegaForce drill bit is built around a premium matrix-body PDC platform. Using application-specific designs, the bit aims to provide highest ROP, the most robust cutting structure, and lowest cost per foot. The new line features the company's SelectCutter PDC technology for maximum abrasion resistance with minimal loss of diamond. Select cutters achieve their objectives through high impact resistance that dissipates dynamic forces across the entire cutter, and thermal mechanical integrity that allows the cutters to endure the frictional heat they generate during the drilling process. Both attributes help them stay sharper longer.

Halliburton has used field-proven force-balancing in its drill bit designs for several years. With multi-level force balancing, cutter placement is optimized, increasing bit stability and cutting structure efficiency. By analyzing forces on adjacent cutters during transition zone drilling, engineers have determined the optimal position of cutters on all arms to minimize any imbalances. This technique results in reduced vibration and efficient penetration.

Not all cutters have to rotate. Smith Bits engineers identify which fixed cutters need to be replaced and optimize the orientation and placement of the rolling cutters within each bit blade. Criteria include first identifying those cutters that experience highest wear, then analyzing the cutting forces that generate rotation. The IDEAS simulation identifies the number of rolling cutters needed and their placement to ensure best results in a variety of drilling scenarios and formation types.

Lab performance has been replicated in the field, drilling highly abrasive formations while delivering significantly higher ROP and durability. A PDC bit equipped with ONYX 360 rolling cutters was run in a Granite Wash well in Oklahoma to test the rolling cutters' potential to reduce drilling costs. The bit drilled out the casing shoe and then made 1,562 ft (476 m) of horizontal hole through the abrasive reservoir section at 24.8 ft/hr (7.6 m/hr). The lateral required seven additional conventional fixed cutter PDC bits with various blade counts. The ONYX 360 bit drilled 57% more footage than the longest subsequent run of 996 ft (304 m) and achieved 44% higher ROP compared to the fastest standard PDC bit.