Brazil gears up for new wave of offshore activity

Brazil's National Petroleum Agency has finally outlined the process for the 11th round of bidding for 166 of the country's offshore oil blocks to be held in May 2013, five years after the previous round went under the hammer. 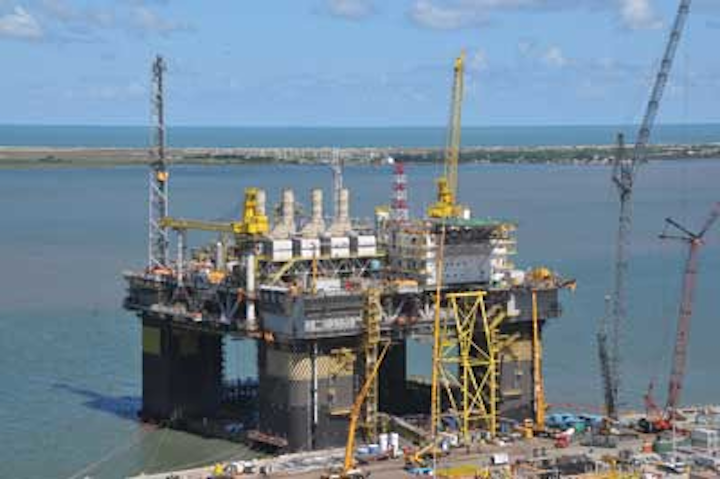 Eleventh round of bidding scheduled for this month

Brazil's National Petroleum Agency has finally outlined the process for the 11th round of bidding for 166 of the country's offshore oil blocks to be held in May 2013, five years after the previous round went under the hammer. Beset by delays and uncertainty, chief amongst which being the ongoing debate surrounding the destination of royalties from the oil production, the auction will provide a timely boost for the industry just ahead of the presalt blocks, set for a first auction in November pending governmental approval.

Of the total 289 blocks comprising the 11th round, 166 are offshore and 81 lie in deepwater locations. The agency's seismic data suggests there are up to 7.5 Bbbl of oil to be tapped in the round, and 71 companies from 18 countries had registered to take part by the ANP's deadline at the start of April.

The latest figures for Brazilian oil and gas production underline what has been a difficult 12 months for the industry, with Petrobras announcing a 36% drop in profits in 2012 compared with the year before and production down 2%. Company President Maria de Graças Foster told investors that 2013 would "also be a difficult year for oil production" and that "it will only begin to increase in the second semester of 2013 with the six new platforms which will begin working through the year."

The company continues to be responsible for 94% of all oil produced in Brazil, of which 91% comes from its offshore wells. Foster announced a 2013-2017 investment plan that maintains spending levels rather than offering any sign of industry-boosting increases, promising $237 billion over the next five years, two-thirds of which will be dedicated to exploration and production.

Meeting high production targets remains one of her biggest challenges, and getting the state oil giant's 11 new units onstream by 2015 is the priority, from which point the company is confident it will start generating more cash than spending. The plans prompted an optimistic appraisal of the presalt prospects from Foster, who predicted that production levels in the Santos and Campos basins would reach 1 MMboe/d by as early as 2017.

Petrobras broke the 300,000 boe/d mark in the presalt layers of the Santos and Campos basins on Feb. 20, seven years after the huge reserves were first discovered. While average daily production remains nearer the 281,000 boe/d mark, the achievement underlines the potential over the coming years. Drawn from just 17 wells, production will receive another boost when FPSOCidade de Paraty, with a capacaity of 120,000 boe/d and currently undergoing a refit in Angra dos Reis, is installed in the Lula field of the Santos basin later this month. The FPSOs Cidade de Ilhabela and Cidade da Mangaritba are undergoing conversion in China and are expected to hit production of first oil in the last trimester of 2014, the former in Sapinhoá field, the latter in Iracema Sul.

The Dutch company SBM Offshore reached agreement with Petrobras for the 20-year charter and operation of two further FPSOs in a contract worth around $3.5 billion. The Lula field, where they are destined to go into production in 2015, is 186 mi (300 km) offshore Rio de Janeiro, and has some of the largest reserves of oil in the world.

Following the signing of a $700-million deal with Ocean Rig for theMylos drillship at the end of 2012, Repsol are expecting delivery in the second half of the year as its construction nears completion in South Korea. Mylos's destination is the Pão de Açucar field, part of the BM-C-33 block Repsol operates on behalf of Statoil (35%) and Petrobras (30%), drilled in 2,800 m (9,186 ft) of water, 195 km (121 mi) off the Brazil coast with estimated resources of 700 MMbbl of light crude.

BP has completed flow tests at the Itaipu-1A well in the Campos basin, 125 km (77.6 mi) off the coast of Rio de Janeiro. The resulting flow of up to 5,600 boe/d was, according to BP Brazil's Vice President for Exploration Neil Piggot, "a good result…indicating that commercially viable flow rates can be achieved." BP is the operator of the block with 40%, while Anadarko Petroleum holds a 33.3% stake and Maersk Energia has a 26.7% share. A new appraisal well, Itaipu-3, has been agreed with the ANP and BP will begin operations there later this year.

Following the ANP announcement on March 12 to hold the bid round on May 14-15, the president of BG Brazil, Nelson Silva, confirmed the company will be looking at operating in new blocks, rather than acting as partners. The company was buoyed by positive results from the company's BMS-9 and BMS-11 blocks in the Santos basin that were, Silva noted, "better than had been anticipated."

Brazil's second biggest operator, OGX, was confirmed as one of the first companies to qualify for the 11th round. After disappointing results in the Tubarão Azul field, better news came with the declaration that three fields, the newly named Tubarão Tigre, Tubarão Gato and Tubarão Areia, were commercially viable for development.

Further north, Norwegian electromagnetic specialists EMGS announced a cooperation agreement with Spectrum covering the Foz de Amazonas basin, giving EMGS access to the 21,000 km (13,051 mi) of 2D seismic data in order to improve imaging. With the prospect of high-quality 2D and 3D data being made available for 65 of the blocks included in the 11th licensing round, this could prove crucial for the predicted influx of smaller and medium-sized companies involved in the auction.

The project includes provision of the OptoSeis system, developed and operated by PGS. Made up of a fully fiber-optic sensor array installed on the seabed with opto-electronics on the topside of the FPSOP-57, PGS will acquire active seismic data once a year using a source vessel, and passive data twice a year, that they will also process. This is expected to provide crucial 4D seismic and PRM information as assets become scarce in existing production facilities.

One aspect of the new licensing round under close scrutiny will be the local content requirements written into the contracts. Several companies have suggested that these requirements are slowing down progress. Director General Magda Chambriard denied there would be any flexibility offered to the matter, however.

Alex Tischdorf, director of operations for Teekay in Brazil, who have 10 shuttle tankers and three FPSOs operated by Petrobras, says that the quality and quantity of trained Brazilians has been on the increase, however, and that there is plenty of time for that process to continue before production is stepped up.

"There is unlikely to be much development in the industry in the next 12 months," he said, "and Petrobras production will remain flat. Their five-year plan is more promising, though, and the vast majority of their increase will be offshore and dependent on shuttle tankers. Plus the amount of oil being exported will increase, all of which can only be good for the shipping industry."

With regards to the rest of Latin America, Tischdorf is happy to sit tight. "We will have to see what happens with the royalties as to how international oil companies and Petrobras react in the bid round. Our Latin American focus remains on Brazil, but we will keep an eye on what happens in Argentina too."

June will see the first of four Teekay tankers being delivered to BG under a long-term agreement signed in 2011. The Suezmax-size DP-2 shuttle tankers are being built in South Korea, with delivery throughout 2013 to commence 10-year time-charters. The agreement includes certain extension options and vessel purchase options.

The first presalt bid round remains slated for November. Brazil's Ministry of Mines and Energy has stated that, as a result of recent discoveries by Petrobras and its partners Galp, Barra Energia and Queiroz Galvão in the BM-S-8 block, estimates for the presalt reserves are now in excess of the previous 35 Bboe, with the Santos block alone potentially holding 1 Bboe.