Like all aspects of ultra-deepwater exploration and production, mooring presents extraordinary challenges, both to engineers and to the people who hold the purse strings. 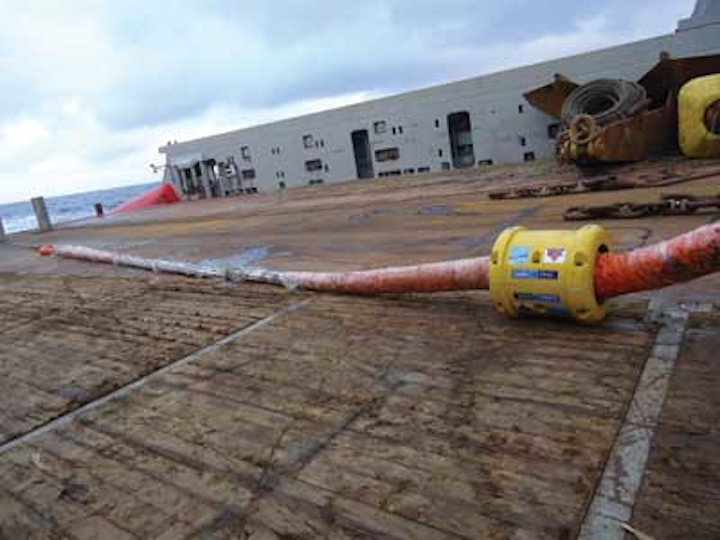 Like all aspects of ultra-deepwater exploration and production, mooring presents extraordinary challenges, both to engineers and to the people who hold the purse strings. In many cases, particularly in the Gulf of Mexico, the cost of deploying a mooring system has caught up to or exceeded the price of the equipment that composes the mooring system itself.

The high cost of mooring system deployment is behind some product development and research initiatives involving the Dutch company Lankhorst Ropes. Early this year, the company conducted field trials for the Lankofirst fiber rope connector offshore Norway. The connector, developed in collaboration with Lankhorst Ropes Offshore Division worldwide agent Offspring International and mooring connector manufacturer First Subsea, was introduced in 2009; since then, it has been extensively tested at the Lankhorst Ropes facility and improvements have been made to the design accordingly, says David Owen, a spokesman for the company. "After that, it has been a case of waiting for a convenient opportunity to take it offshore for testing," he says.

The Norway tests demonstrated that the Lankofirst connector could be assembled in 15 minutes, a time savings of at least one hour over traditional shackles, Lankhorst maintains. The device can be assembled by two people, rather than the three people usually required for a shackle connection.

The company says the connector, made of forged steel, is smaller, lighter and stronger than plate links and thimbles, and can be used for all types of fiber rope mooring connections. The device uses a sub-connector "donut" integrated into the rope termination during manufacture, rather than a large spliced soft eye normally used with H-link and shackle connections. The offshore trials involved a clam design connection; snap and link connection options for the Lankofirst are in development.

As installation water depths increase, the number of connectors per mooring line go up, highlighting the importance of safely accelerating installation operations.

"It's part of a mooring philosophy called 'lean' installation, which, like lean manufacture, is designed to reduce waste and improve quality," Owen says. "In this case, 'waste' is the excess time needed to make up traditional connectors. At the moment, lean installation as a concept includes the Lankofirst and First Subsea's Ballgrab subsea mooring connector."

First Subsea is providing 16 Ballgrab connectors for Chevron's Jack/St. Malo project in water depths of 2,133 m (7,042 ft) in the GoM. The connectors will be attached to polyester mooring lines in a 4 x 4 arrangement.

Another element of the lean installation philosophy involves a new mooring method developed by Lankhorst and Offspring International.

"Essentially, it's aimed at reducing the need for excessive pre-tensioning of the mooring line, which is expensive and requires specialist vessels," Owen says. "Moreover, as lines get longer, and heavier, it will be practically impossible to pre-tension to current values."

Ropes are currently pre-tensioned to 40% minimum breaking strength, or MBS. An alternative could involve pre-tensioning to 30% MBS and allowing ocean conditions during a storm to provide the final line tensioning to 40%.

Lankhorst and Offspring International recently carried out tests at the Lankhorst Ropes Offshore Division facility in Portugal using a case of a turret moored FPSO. In a paper presented at the Oceans '13 conference in Bergen, Norway, last month, the companies maintain that the FPSO itself could be used to provide the pre-tensioning needed to install mooring lines by deballasting and ballasting the vessel. By doing so, operators could eliminate the need for expensive installation vessels, other than for deployment and hookup.

GE Power Conversion has introduced a podded thruster that the company says will dramatically cut fuel consumption while offering enhanced performance. The Inovelis thruster incorporates pump jet technology, with fixed stator vanes and a nozzle that work together to guide the water across the impeller blades, while maintaining the maneuverability and fuel economy of a podded thruster, GE says. The company calls the system "the marine equivalent of a jet engine" that could provide enough fuel efficiency to allow future offshore vessels to be designed with reduced capacity power systems, saving weight and space onboard.