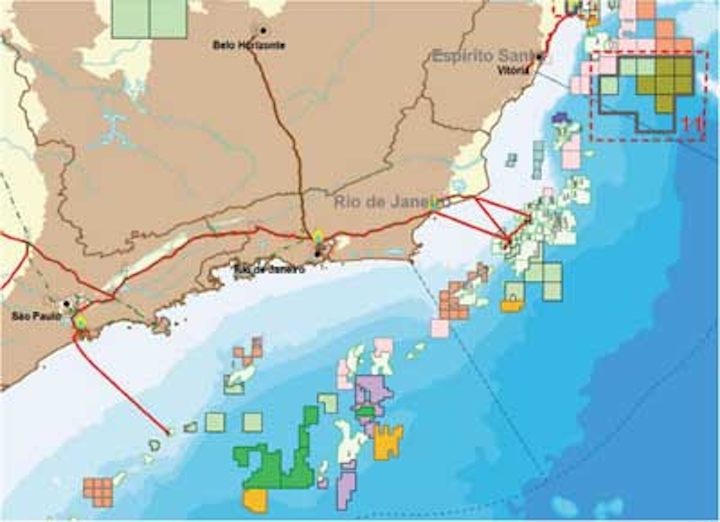 National oil companies dominate Latin America's oil and gas industry: Petrobras in Brazil, Pemex in Mexico, PDVSA in Venezuela, Ecopetrol in Colombia, Petroperu in Peru, Enap in Chile, and Enarsa in Argentina. While Brazil is expected to continue to lead the region's offshore development, oil and gas exploration is expanding across Latin America. The following is an overview of the regulatory environments for the oil and gas industry in selected Latin American nations.

The Brazilian oil and gas industry is booming. In May, the national oil agency (ANP) held the 11th bid round in which 289 blocks were offered. Blocks located in the presalt area were not included in this bid round. A total of 30 domestic and international oil and gas companies were awarded 87 onshore and 55 offshore blocks. A historic record signature bonus of approximately $1.38 billion will be collected by the ANP by July 30 as a result of the bid round.

And there is much more to come. After more than five years of study, the first bid round for presalt blocks is scheduled for October 2013. The new regulatory model approved by the Brazilian congress for the presalt (and strategic areas) is the production-sharing contract. Until now, the concession contract was the only method used by the government to grant exploration and production rights in Brazil. It is estimated that 100 Bbbl of oil lie below the surface in the presalt area, which extends 800 km (497 mi) from the state of Espírito Santo to the state of Santa Catarina.

The ANP has also announced an unconventional bid round slated for November 2013. According to the International Energy Agency, Brazil contains the third-largest amount of unconventional gas reserves in Latin America after Argentina and Venezuela. Preliminary studies indicate that Brazil has a potential 14.6 tcm (516 tcf) of unconventional natural gas.

Technical and regulatory challenges await those participating in the country's oil and gas industry. For example, soon after the 11th bid round, Brazilian oil and gas players were hit by an increase in the VAT (ICMS) tax charged by the state of Rio de Janeiro, where a significant portion of the Brazilian oil and gas industry is located. The state of Rio de Janeiro transformed the ICMS tax exemption – previously applicable to the importation of goods and equipment for use in exploration activities, or for use in both exploration and production activities but for a period of less than 24 months – into a "tax basis reduction." As a result of this change, importers of such equipment in the state of Rio de Janeiro will now be required to pay a 1.5% ICMS tax on the customs value of all such equipment without the right to a credit. Some view this action as inconsistent with principles guaranteed to the taxpayer by the constitution of Brazil. It remains to be seen, however, if any action will be taken to repeal the exemption.

In Venezuela, mineral rights are held by the state. The 2006 Organic Law on Hydrocarbons (OLH) governs exploration and production of oil and associated natural gas and the 1999 Organic Law on Gaseous Hydrocarbons (Gas Law) governs exploration and production of non-associated natural gas. Those laws cover both onshore and offshore areas.

Under the OLH, private operators are not allowed to acquire rights for exploration and production of oil in Venezuela. Those rights must be held by a state-owned entity or a mixed company (empresa mixta). Usually, the empresa mixta will be a Venezuelan corporation (compañía anónima), domiciled in Venezuela and subject to national law. The Venezuelan state must hold more than 50% – commonly 60% – of the capital stock of the empresa mixta and must control operations and corporate decisions. Under the Gas Law, the exploration and production of non-associated natural gas may be undertaken by the state directly or indirectly through state-owned companies alone or with national or foreign private investor participation or by national or foreign private investors.

The primary offshore non-associated natural gas projects with private participation are Mariscal Sucre (Northeast), Rafael Urdaneta (Gulf of Venezuela), and Delta Caribe Oriental (Northeast). In the Delta Caribe Oriental project, a unitization agreement was executed between companies operating in Venezuela and Trinidad & Tobago. Production is expected to begin between 2017 and 2020. Production from the Mariscal Sucre project is expected soon and important discoveries of non-associated natural gas have been reported in the Rafael Urdaneta area.

Exploration permits in the federal offshore area are granted for up to 12 years plus an extension of seven years (with the acreage diminishing at intervals). A production concession may then be granted that lasts up to 25 years, plus a possible 10-year extension. Provincial offshore areas follow the same terms and conditions.

As of November 2004, all new offshore exploration permits and concessions in federal waters must be issued to the state-owned company, Enarsa. That company may develop those areas alone or in association with private companies. The selection of the private parties to participate with Enarsa is to be done through public bid. In 2010, Enarsa announced that it would license 31 offshore blocks in hopes of making discoveries similar to those in Brazil. The bids, however, were canceled. Although no information on the potential of the areas has been released, it is expected that calls for bids will again take place during 2013 or 2014.

Finally, no company (or its shareholders) authorized to operate in the Argentine offshore area may enter into any commercial relationship with any other company operating in that area without authorization from the Argentine government. In practice, that means that companies authorized to do business in Argentina cannot do business with companies operating in the Malvinas or Falkland Island area.

In Colombia, the subsurface is owned by the state. Exploration and exploitation of hydrocarbons, onshore and offshore, require a concession from the government. The National Hydrocarbon Agency (ANH) is in charge of administering hydrocarbon resources. ANH has structured several competitive processes where prequalified operators can participate to be awarded exploration areas. Currently, Petrobras, Ecopetrol, Equion (an Ecopetrol/Talisman joint venture), ONGC Videsh, Reliance, Shell, Repsol (in a joint venture with Ecopetrol), Chevron, and Anadarko (in a joint venture with Ecopetrol) hold offshore blocks in Colombia. Most blocks are in the exploration phase except for Chevron's Guajira block, which has been in production for more than 25 years.

The most current version of a concession contract for offshore areas contemplates a six-year exploration phase, normally divided into two subphases of 36 months each. General minimum exploratory obligations include 3D seismic (15 sq km per 200 sq km of area), piston core tests (one per 200 sq km of area), and the drilling of one exploratory well. The exploitation phase is for 24 years.

On May 31, the Peruvian hydrocarbons agency, Perupetro, officially launched the 2013 bid round for license agreements over nine offshore blocks. Bids will be awarded based on additional royalties offered.

In the event of a commercial discovery, the Peruvian national oil company, Petroleos del Peru (Petroperu), will have the right to be awarded a participating interest of up to 25% in the license agreement. Its share of the exploration and development costs will be paid from its share of production.

Currently, offshore activities in Peru focus mainly on the north coast, where SAVIA, a joint venture between KNOC and Ecopetrol, is producing oil and is looking to produce gas, once environmental permits are completed. In addition, BPZ has a discovery in that area. SK Innovation and Karoon Energy are performing offshore exploration activities.

The conditions applicable for offshore license agreements are the same as for onshore. Under license agreements, ownership of the extracted hydrocarbons belongs to the licensee subject to the payment of royalty.

The licensee under each license agreement will have the benefit of the following provisions:

In Mexico, direct ownership of oil and hydrocarbons is held at all times exclusively by the Mexican state. Furthermore, the activities related to exploration, exploitation, and production of petroleum and other hydrocarbons are reserved exclusively to the Mexican state and no concessions or similar agreements can be granted under any circumstance in favor of any individuals or private entities. Such activities are carried out by the Mexican state through its state-owned company, Petroleos Mexicanos (Pemex) and its subsidiaries, which is the only entity allowed to perform exploration and exploitation activities in Mexico.

The current regulatory framework of Pemex enables it to contract exploration and production activities with third parties with certain limitations such as that the Mexican state shall always maintain direct ownership over hydrocarbons and the consideration to contractors must be paid only on a cash basis.

The government of President Peña Nieto has announced that in August or September 2013, it will present to the Congress an energy reform initiative to improve the operation of Pemex, provide a more flexible fiscal regime for Pemex, and increase private investment in the oil and gas industry.