The record $1.4 billion raised in signing bonuses from the Brazil Petroleum Agency's (ANP) 11th oil and gas licensing round in May marked a successful conclusion to the first offshore concession issue in Brazil since 2007. 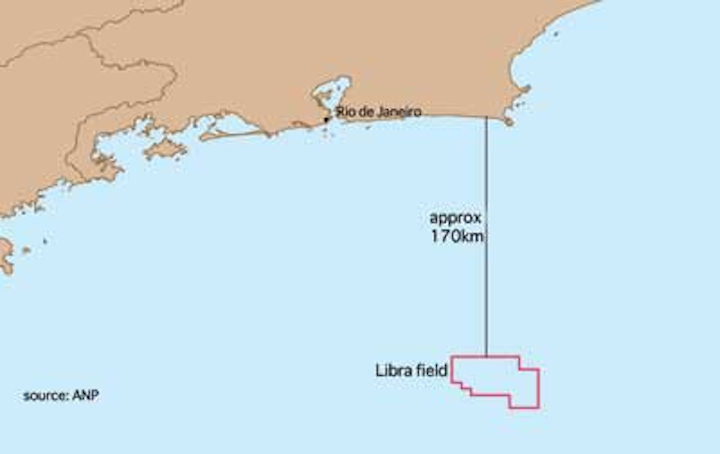 The record $1.4 billion raised in signing bonuses from the Brazil Petroleum Agency's (ANP) 11th oil and gas licensing round in May marked a successful conclusion to the first offshore concession issue in Brazil since 2007. However, that figure is likely to pale against the amounts involved as the world's biggest oil and gas companies compete for acreage in Brazil's first auction of presalt operating licenses scheduled for October. Following a meeting between President Dilma Rousseff, her Minister for Mines and Energy Edison Lobão, and Finance Minister Guido Mantega, it had become clear that global discoveries since 2007's confirmation of huge reserves deep under the country's Atlantic coast have heightened the need to re-concentrate the industry's interests in Brazil.

The available blocks are in the Libra prospect within the Santos basin about 170 km (106 mi) off the coast of Rio de Janeiro. CGG estimates potential recoverable reserves between 8-12 Bbbl across an area of 727 sq km (281 sq mi), making it the biggest auction of its kind anywhere in the world. With that in mind, director-general of ANP Magda Chambriard announced that the auction will be moved to Brasília, to ensure the presence of the president.

"The volumes in Libra are completely unique and unimaginable," said Chambriard. "I believe that only large-scale companies will take part in the auction, including Asia's." The same Chinese, Japanese, and Indian companies were conspicuous in their absence from the 11th round, possibly to allow themselves greater concentration on the presalt auction.

The move to a production-sharing framework for the presalt blocks does away with the former concession-based approach that was followed in May's auction and in which, after paying a signing bonus, companies owned 100% of the oil in that block. Under the new system, the government will maintain ownership of the minerals and divide up the profits based on the cost of extraction. In contrast to the concession system, the bonus payments and local content requirements will be fixed, and it will be the percentage of profit oil that companies are prepared to sign over to the government that will determine the success of the bids. The ongoing fall in production costs, coupled with the high success rate in exploratory drilling in the presalt prospects – up to four times that of the global average – should mean that the new deal remains an attractive investment.

Tom Coleman, senior vice president at investor analysts Moody's, does not foresee any hesitation within the industry. "The 11th round was quite successful and although the ANP didn't get rid of all the blocks, most of the important offshore acreage was taken up," said Coleman. "For the new auction, as long as companies can get the profitable oil out, the new system will work fine. The uncertainty is how much bonus they are willing to offer and how much profit oil they are prepared to give to the government. Besides the economics of it, though, the question is, after this long hiatus, 'is Brazil willing to fully open itself up to foreign investment?' and I think the answer is 'yes'."

The new framework also leaves Petrobras looking at a huge and potentially costly expansion program to keep pace with the new acreage. The current law mandates that the company be the principal operator and at least 30% owner of every block auctioned. In spite of the almost unprecedented $11 billion raised in bonds by the company earlier this year, the demands of that 30% could both hinder its operations and put off international companies already wary of the restrictive local content requirements. Even across the one prospect, the company's productivity targets remain high enough to create a fine line between maximizing resources and spreading them too thinly between international oil companies, each with their own strategies.

Petrobras acquired 34 blocks at May's auction, with OGX the next biggest Brazilian investor with a working interest in 13 blocks, seven in deepwater, two in shallow water offshore, and the rest onshore. OGX CEO Luiz Carneiro said, "The partnership with ExxonMobil and Total, two major international oil and gas players with significant expertise and resources, with a strong track record of success in West Africa and the Atlantic Margin, underscore the high potential of the blocks, as well as our ability to identify and develop future growth opportunities." Total, partner with OGX in the CE-M-663 block in the Ceará basin, was among the international companies to announce their intentions in Brazil with the acquisition of 10 new blocks. Expansion in the region is a key part of the company's strategy in 2013, which is expected to lead to further investment come October.

BG Brasil secured 10 blocks in the Barreirinhas basin on the Brazilian equatorial margin and, with 100% ownership of six of those, has resumed in earnest its operating position in the country. The company announced that it is set to invest around $3 billion per year in Brazil between 2013-2018, but it remains to be seen how much of that will be directly poured into future operations in Libra.

As ever, doubt remains over the realization of October's auction should the final royalties bill remain unconfirmed. Whether or not any new distribution of profits will apply to old contracts remains a question awaiting the Supreme Court's answer. The planned creation of state company Pré-Sal Petróleo SA to handle the running of the auction and manage the capital has also yet to come into effect. It is dependent on a presidential decree, which could leave the ANP to handle the mandatory details while the potentially laborious election of the company's members takes place.