One of the emerging powerhouses in E&P offshore Brazil is the Repsol Sinopec partnership. 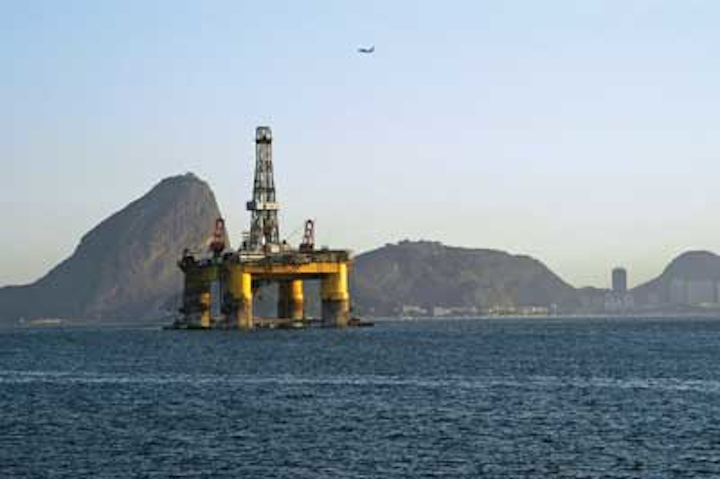 One of the emerging powerhouses in E&P offshore Brazil is the Repsol Sinopec partnership. Over the past two years since its formation, the Spanish/Chinese partnership has delivered three potentially major discoveries in the ultra-deepwater Campos basin, and participated in others elsewhere operated by Petrobras. The joint venture is also working with Petrobras on two giant field development projects in the Santos basin.

Last month, drilling contractor Ocean Rig UDW confirmed signing documents with Repsol Sinopec Brasil for a long-term hire of the newbuild drillshipOcean Rig Mylos, under construction at Samsung Heavy Industries shipyard in South Korea. Following the scheduled delivery in July 2013, the rig is due to start a three-year contract offshore Brazil for the partnership, with options for two further years.

Offshore spoke to Repsol about the rationale behind the joint venture, and its growth plans for Brazil over the coming years.

Offshore:When and why did the two companies decide to join forces in Brazil?

Repsol: Repsol Brasil and Sinopec formed an alliance to jointly develop E&P projects in Brazil in October 2010. The joint venture saw Repsol's assets in Brazil valued by Sinopec at $10.7 billion, more than five times the amount originally invested by Repsol in the acquisition and exploration of the Brazilian acreage. With this agreement, Repsol was able to extend its reach without compromising investment or development in other areas. Repsol holds a 60% stake in the Brazilian subsidiary and Sinopec the remaining 40%.

Offshore:If this opportunity had not arisen, would Repsol have sought another partner to share the high capital burden of exploration and development offshore Brazil?

Repsol: We are pleased to be developing our Brazilian subsidiary with an internationally renowned and experienced partner. Repsol would always have looked to partner with a major oil and gas company that would have enabled it to develop its current projects which include some of the world's largest discoveries in recent years.

Offshore:Does Repsol Sinopec have strengths in particular technologies, and if so, can you provide examples of how this expertise has been applied to the venture's operated discoveries to date?

Repsol:To find presalt reserves, Repsol has made substantial investments in technology with projects such as Kaleidoscope, a highly advanced program developed between Repsol, the Spanish National Research Council, IBM, the Polytechnic University of Catalonia, and Stanford University. The project's main aim is to develop algorithms and software capable of processing seismic survey images 15 times faster than conventional software.

In 2012 Repsol has continued to develop its proprietary advanced technology allowing a faster time to market for new oil and gas properties by shortening the seismic data analysis phase. Throughout the year the company has been working to capitalize on its seismic technological expertise and hopes to export the technology to presalt deposits offshore West Africa such as in Angola. In addition to these regions, Kaleidoscope has been used in the Gulf of Mexico, a region well known for its complex geological conditions.

Offshore:What are the company's long-term oil and gas production targets in Brazil?

Repsol:Repsol has a significant and diversified portfolio of drilling projects in Brazil, including a producing field (Albacora Leste), two fields under development (Piracucà and Sapinhoa – previously known as Guarà), a block under appraisal (BM-S-9: Carioca), and 12 exploration blocks of high potential of which Repsol Sinopec operates five.

Exploratory activity involving or performed by Repsol over the last five years has led to two of the top five discoveries in the world. These include the Sapinhoa field (Guarà) in the Santos basin, operated by Petrobras, and the Pão de Açucar field in the Campos basin, operated by Repsol Sinopec. As stated in Repsol's strategic plan this May, continued E&P investment in Brazil and worldwide, will increase production levels, placing our average replacement ratio above 120%.

Additionally the company has a strong pipeline of prospective resources in the Santos, Campos, and Espiritu Santu basins. Contingent resources include the following:

Offshore:When does Repsol Sinopec expect to resume drilling on the BM-C-33 license in the Campos basin? Are there other notable structures waiting to be drilled, or is the plan to first appraise the discoveries you have?

Repsol:Repsol Sinopec and its partners are preparing an appraisal plan to be submitted to the Brazilian National Agency of Petroleum, Natural Gas and Biofuels (ANP). Once this plan has been approved, Repsol can progress with drilling activity on BM-C-33.

Offshore:What are the characteristics of the finds to date?

Repsol:The oil from the presalt area is of good quality – about 30º API.

Offshore:Can you provide details of development timelines for some of the other discoveries where the company is operator?

Repsol:Both Panoramix and Vampira are key focus areas. They will be developed, in line with the strategic plan, through to 2016.

Offshore:Is it tough to procure suitable deepwater drilling rigs for your various projects?

Repsol:We work with various operators of drilling rigs for our projects in Brazil. Most recently the Stena DrillMax drillship was used to drill the 1-REPF-11A-RJS well, informally known as Gavea, in the presalt area of the Campos basin this May.