Jon Hermstad, Tor Inge Tjelta, and Tom Guttormsen have been inducted into the American Society of Civil Engineers OTC Hall of Fame. 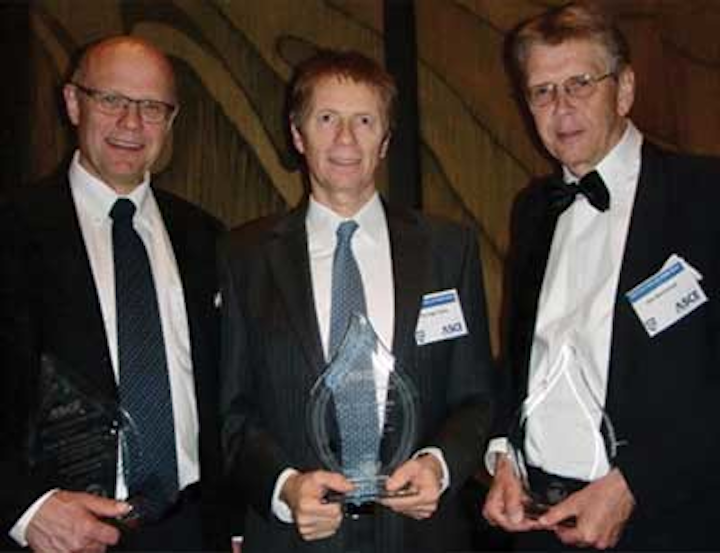 Mark McCutchan has joined DCL Mooring and Rigging as vice president of sales and marketing.

Parker Drilling has electedJonathan M. Clarkson and Richard D. Paterson to its board of directors. Both will serve on the board's audit committee.

EPC has appointedEuan Sellar as project manager to focus on the final phases of the Rochelle field development for Endeavour Energy in the central North Sea. Rob Harris has joined EPC as study team leader on the Lancaster development for Hurricane.

Antonio Quetes and Antonio Njiva of Operatec LDA were the first Angolans trained as saturation divers at the Underwater Centre in Fort William, Scotland. They participated in the three-week HSE Closed Bell course that teaches experienced divers the procedures and competencies required to dive using a saturation system.

Barry Jackson has been appointed chair of Nexen's board of directors.

Vincent Parmentier has been appointed global operations and supply chain leader of Hydratight.

Exova has appointedRobin McGill as director of Europe.

STATS Group has appointedGraeme Coutts as a non-executive director, and Leigh Howarth as CFO.

Maria das Graças Silva Foster, CEO of Petrobras, was named of the 100 most influential people in the world by Time magazine.

Geoforce has namedJohn McNulty as head of software development.

RLC has appointedCurtis Hudson as director of maintenance.

Hugh Williams, CEO of the International Marine Contractors Association, will stand down at the end of the year.

Jaya Holdings Ltd. has appointedMax Hartvigsen as president of the offshore division.

InterMoor has namedJim Macklin vice president of projects and engineering.

Lennart Hagelqvist has been named CEO of DIAB Group. He succeeds Anders Paulsson, who will remain with the company as an adviser.

Senergy Development Solutions has appointedRob Fisher as a director.

Sietze Hepkema has been named chief governance and compliance officer of SBM Offshore.

Terry Fike has been appointed well control specialist at DOYLES.

ANSYS and FMC Technologies have executed a long-term strategic agreement for simulation software that can standardize design analysis and provide scalability for growth.

GE Oil & Gas has appointed DYNAenergetics as a global distributor of the company's portfolio of free point equipment and wireline accessories.

Superior Energy Services has taken delivery of a maritime training simulator from Kongsberg Maritime. The next generation simulator will be used to provide integrated, real-time training for Superior's offshore marine personnel at its new facility in Anchorage, Alaska.

Ashtead Technology has partnered with The Oceanscience Group to offer the UnderwayCTD and UnderwaySV systems for the rental market.

Senergy has expanded its operations into Dubai and has relocated its Aberdeen-based team to new premises in Queen's Terrace.

Enteq Upstream plc is in the process of acquiring the assets of Extended Exploration Technology Inc., a Santa Clara, California-based measurement while drilling equipment company.

Proserv has agreed terms to assume Weatherford International's subsea controls business. Proserv will acquire the business assets, and Weatherford's existing subsea controls management will continue to run the day-to-day operations as part of the Proserv organization. Weatherford will acquire common and preferred equity in Proserv and will have representatives on Proserv's board.

FMC Technologies has completed the transaction to acquire the remaining 55% of the outstanding shares of Schilling Robotics.

Dockwise says its subsidiaryDockwise White Marlin seeks to acquire around 54% of the shares in Dutch competitor Fairstar Heavy Transport.

Stork Technical Services Subsea has invested more than £2 million ($3.2 million) in a new specialist dive intervention craft and full diving spread. The 15-ft (4.5-m) vessel, which is equipped with a bespoke diver recovery system and software-based dive management system, will be delivered in summer 2012.

Cameron has agreed to acquire the drilling equipment business of TTS Energy Division from TTS Group ASA. The all cash transaction valued at $270 million is expected to close during the middle of 2012.

Rutter Inc. will receive $1.4 million in funding from the Petroleum Research Newfoundland and Labrador under its Arctic & Harsh Environments strategic focus area. The funds will be used to build and test an advanced radar system that is capable of providing enhanced ice navigation and detection. The integrated dual polarized ice navigation and detection radar is expected to help operators distinguish between the much harder multi-year ice and first-year ice.