This third and final article on day rates in the offshore drilling market examines the impact of contract duration, ownership and well type. 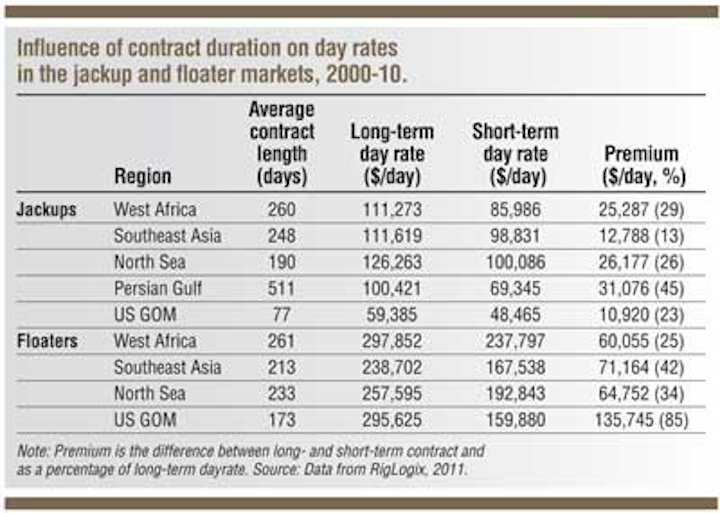 This third and final article on day rates in the offshore drilling market examines the impact of contract duration, ownership and well type. The analysis found that day rates are positively correlated with contract length; that national oil companies pay higher rig rates than public firms; and that appraisal drilling is more expensive than development or exploratory drilling. 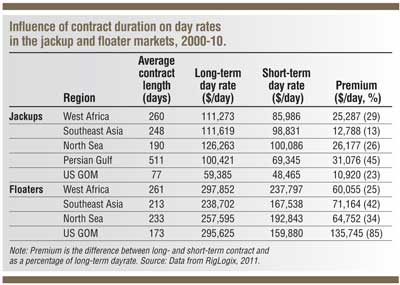 Contracts were grouped by rig class and region into those greater than and less than the regional mean duration over the period 2000-10. In every region and rig class, short-term contracts had lower day rates than long-term contracts. For jackups, the difference between contract types ranged from 13% in Southeast Asia to 45% in the Persian Gulf; for floaters, the premium was higher and ranged from 25 to 85%.

Separating the data into three time periods, two rig classes and five regions provided 27 data sets for assessment. In 26 of 27 comparisons, longer-than-average contracts had higher day rates than shorter-than-average contracts, although the trend was only significant in 14 comparisons. There is no evidence that higher day rates for long-term contracts are affected by changing market conditions.

International oil companies and NOCs may have different motivations for investing in drilling and may differ in their willingness to pay for drilling services. IOCs are responsive to shareholder concerns and driven to maximize their return on investment. NOCs are motivated by both economic and political factors which may increase their exploration investments and willingness to pay for drilling services, increasing the day rates they negotiate relative to IOCs and independents. 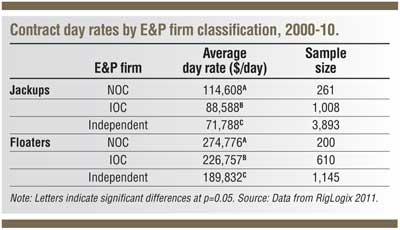 The trends observed could be influenced by regional or temporal factors. For example, if NOCs are more active in expensive markets such as the North Sea, differences in day rates would reflect regional conditions rather than differences arising from ownership. From 2000-10, NOCs also became more active in the market, particularly the jackup segment, which coincided with an increase in day rates. To control for the effect of time and regions, a regression model was built with the contract start year as a predictor variable, and E&P firm type and region as indicator variables:

where DR is the day rate, IND is 1 if the E&P firm is an independent and 0 if otherwise; IOC is 1 if the E&P firm is an IOC and 0 if otherwise; YEAR is the contract start year; and GOM, NSEA, AFRICA, and PGULF are indicator variables that take the value 1 if the region is the GOM, North Sea, West Africa, or Persian Gulf, respectively; and 0 otherwise. When the region was Southeast Asia, all regional indicator variables were 0. The Persian Gulf variable was not included in the floater model. 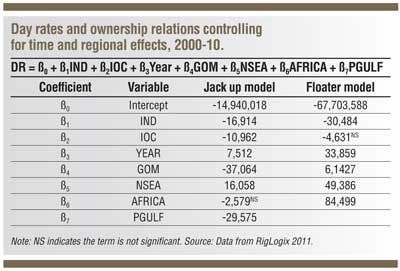 In exploratory drilling, the primary goal is to find commercial quantities of hydrocarbons; in development drilling, the goal is to produce hydrocarbons. During appraisal and delineation, the primary goal is to define the characteristics of the reservoir, and as a result, appraisal drilling is considered more technically demanding than exploratory or developmental drilling. Information is a primary objective of drilling and because appraisal wells may later serve as production or injection wells, they are drilled with careful consideration of their future utility. E&P firms may prefer to use higher-specification rigs for appraisal, and a day rate premium is expected.

In jackup markets, there were no significant differences in day rates by well type either in the world market or within regions. In the floater market, appraisal drilling received a premium of approximately $80,000/day relative to developmental and exploratory drilling.

It is possible that appraisal wells are drilled by more advanced rigs than development or exploratory wells, and this could explain differences in rates. We used floater water depth ratings as a proxy for rig specification and separated floaters into mid-water (< 3,000 ft), deepwater (3,000-7,500 ft), and ultra-deep (> 7,500 ft) categories. The increased cost for appraisal drilling in floaters is robust across rated water depth. Appraisal drilling is always significantly more expensive than development or exploratory drilling, or both.

It is also possible that appraisal drilling has been more common in high cost regions such as the North Sea. When regions were compared separately, appraisal drilling was always more expensive than developmental or exploratory drilling, but the difference was only significant in the GoM and North Sea where the sample sizes were the largest.

Higher day rates for appraisal drilling suggest that contractors require a risk premium for appraisal wells. If a drilling contractor damages a wellbore or otherwise provides inadequate well construction services, they are often contractually obligated to drill a replacement well at no additional cost to the E&P firm. If appraisal wells are associated with a higher risk of failure, contractors may require higher day rates to undertake these drilling programs.

Many factors impact day rates, but we only observe and control for a portion of the measurable universe. When we aggregate rigs and analyze single factor trends over time, we do not consider the impact of interacting factors and other potential effects, which if included, may bias or even negate the results obtained. For example, the analysis of contract duration did not account for rig specifications; high-spec rigs may be more likely to negotiate long-term contracts than low-spec rigs and this, rather than contract length, may account for the observation of higher day rates for long-term contracts.

Sample size considerations limit the ability to make robust generalizations in multi-factor analyses. While the overall sample was large, only the GoM and North Sea had a large number of contracts in both the jackup and floater markets. As a consequence, many comparisons within regions are statistically insignificant. For example, when comparing day rates for appraisal, exploratory and development drilling within regions, the pattern of higher day rates for appraisal drilling was consistent across regions, but significant differences were only observed in the GoM and North Sea.

In this three-part series, empirical analysis of rig contracts was used to quantify some of the "common" knowledge that has developed in the offshore drilling industry.

Demand for drilling services is positively associated with oil prices for both floaters and jackups. The best predictors of demand were long-term moving averages suggesting that short-term price fluctuations associated with seasonal or temporary geopolitical events do not significantly impact market activity.

Dayrates increase with increasing oil prices for both floaters and jackups. Long-term moving averages of oil prices were the best predictors of day rates, consistent with the hypothesis that high oil prices increase global demand and lead to increasing day rates. Effects were consistent across regions indicating that regions respond similarly to changes in prices.

Day rates and utilization rates are positively correlated, but the strength of the relationship varies by time period and region. While utilization is a significant predictor of day rates, a large portion of the variation in day rates is not explained by utilization rates, suggesting that other factors such as regional prospectivity are also important.

Rigs capable of drilling deeper wells, working in greater water depths, or with more advanced station-keeping capabilities have higher day rates than rigs with lower specifications. These results were consistent across regions, but the value of the premium varied and in the West African floater market had a lower premium than other regions.

Long-term contracts command higher day rates than short-term contracts and the relationship was robust throughout the decade, suggesting that E&P firms are willing to pay more to secure drilling capacity.

Transocean and other large contractors receive higher day rates than their competitors because of their high specification fleets. There is no statistical evidence that large firms are able to use their market power to increase day rates, consistent with the view that the industry is highly competitive.