Arctic reserves are enormous, and industry interest in Arctic E&P is huge. 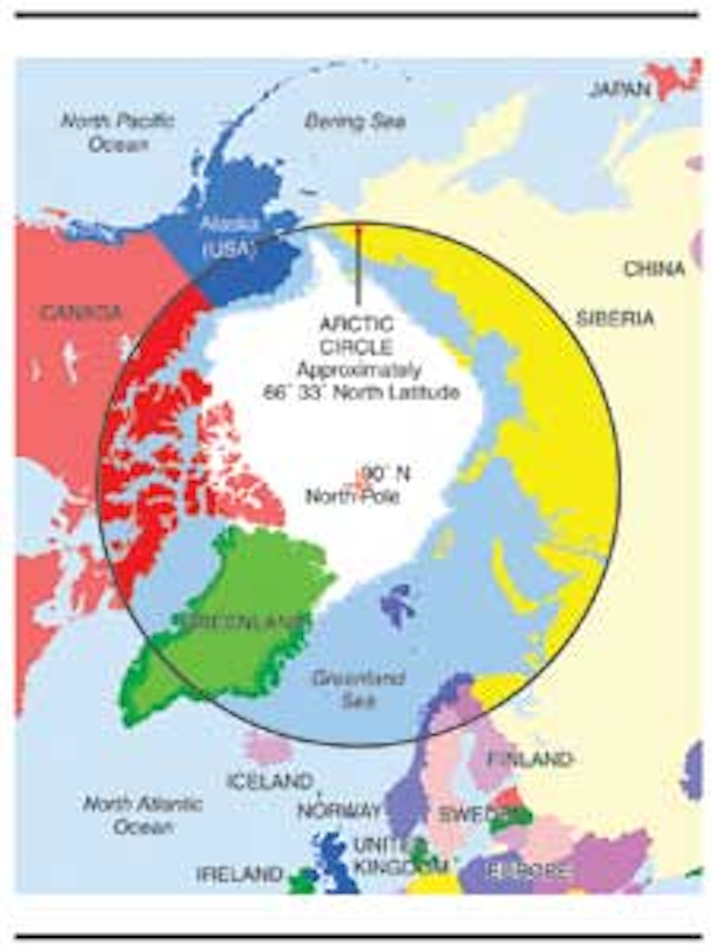 Arctic reserves are enormous, and industry interest in Arctic E&P is huge.

U.S. Geological Survey (USGS) numbers published in the 2008 "Circum-Arctic Resource Appraisal: Estimates of Undiscovered Oil and Gas North of the Arctic Circle" indicate approximately 90 Bbbl of oil, 1.7 tcf of natural gas, and 44 Bbbl of natural gas liquids may remain to be found in the Arctic, of which approximately 84% is expected to lie in offshore areas.

With the realization that huge volumes of conventional oil or oil equivalent lie north of the Arctic Circle, the oil and gas industry renewed its interest in operating in the Arctic. The vast quantities of untapped potential offer enormous incentives for developing technologies that will allow E&P activities to move safely into one of the most challenging operating environments in the world.

Harsh operating conditions are an obvious concern for Arctic E&P. Frigid conditions and ice loading issues are the two biggest operational considerations impacting nearly every aspect of Arctic operations. These conditions compound the technical challenges associated with operations in remote areas with limited infrastructure. As Arctic offshore exploration moves from coastal zones to deeper water, technical issues associated with mooring and station-keeping come to the forefront.

Ice-strengthened drillships moored in shallow water operated in the Beaufort Sea from the mid-1970s through the early 1990s. These operations provide valuable operational data for researchers and designers interested in mooring and station-keeping in Arctic waters. But while historical information provides a foundation for research, it is location/season specific, and extrapolation to other locations or conditions is difficult.

Although there have been advances in understanding the physics of ice interaction with structures and other Arctic technologies in general, considerable work remains to be done if the industry is to pursue deepwater operations safely in such a harsh environment – particularly in light of the fact that the regulatory environment governing offshore Arctic operations today is far more stringent than during earlier exploration periods.

Improving the industry's ability to contend safely with Arctic conditions is a focus area for ABS. In the interest of gathering industry expertise, the company hosted a workshop in 3Q 2012 to provide a forum where experts could present their views on key issues, engage in discussion, and explore the need for a joint industry effort in the related topics of mooring/station-keeping and ice management. There were 80 attendees at the workshop, where 14 presenters provided information on a range of topics on mooring systems for Arctic operations. A survey of participants at the conclusion of the workshop identified the most challenging subjects in developing Arctic mooring systems: ice management, guidance on global ice load prediction, and safer mooring systems.

For a moored system, physical ice management can include icebreaking, ice clearing, or iceberg towing to reduce the mooring loads on the drilling or production unit. Threat evaluation can be based on the level of probable mooring loads and the mooring system capacity in the managed ice. These two processes, which are part of the ice management system, also can be considered the key elements in the design of the moored structure. To fully address ice management issues for moored structures, the industry has to contend with a number of challenges:

The industry needs guidance on how to apply standards such as ISO 19906 in mooring system design. Some effort has been made to analyze gaps and to provide guidance on how to use ISO 19906, and it has been shown to be quite difficult. For mooring systems in ice, understanding the ice load and its uncertainties is important because the safety factors for ice loads might need to be different from those for wave loading.

Operations in the Arctic are being undertaken with the utmost care, reflecting the zero tolerance requirements being adopted by operating companies to reduce the potential for environmental damage. To achieve this goal, the industry needs to follow a conservative approach in determining design conditions, especially given the lack of comprehensive service experience in the region.

To deal with these issues, the industry will need:

One of the critical components for units operating in ice-infested waters is reliable disconnection and reconnection devices.

Many new technologies have been developed to allow disconnection and reconnection, and existing technologies are being developed further for new applications. Several examples of mooring systems and disconnecting devices with service experience were discussed at the workshop, including those of theTerra Nova and SeaRose FPSOs, vessels now operating in the ice-infested waters of the Jeanne d'Arc basin in the Grand Banks offshore Atlantic Canada. These units have been moved off station and reconnected successfully and serve as examples of disconnectable systems that have worked reliably in inclement conditions.

In general, the prevailing concern regarding disconnectable systems is their ability to release under high ice loads. The new designs discussed are primarily conceptual and have not been tried in the field, which means reliability and safety have yet to be established.

To move these and other technologies forward, the industry will have to take a number of critical steps, including:

The ABS Arctic Mooring Workshop was set up as a forum where industry experts could present their views on key issues and participate in discussion that would allow them to explore together the need for a joint industry projects in the related topics of mooring/station-keeping and ice management.

While considerable work remains to be done, the industry is moving consistently in the direction of safe Arctic operations, a goal that will be reached more quickly through collaboration. ABS plans to be part of that effort by continuing to seek input and guidance from the industry and by partnering in technology development.

The hope is that workshops such as this will lead to small group‐based joint development efforts or even larger-scale joint industry projects that will expedite the development of the technology necessary to safely develop the vast resources of this inhospitable area.