Late in January, the South Africa Minister of Minerals and Energy approved the award of a natural oil prospecting sub-lease to Ranger Oil Limited over blocks 11B and 12B offshore the south coast of South Africa. 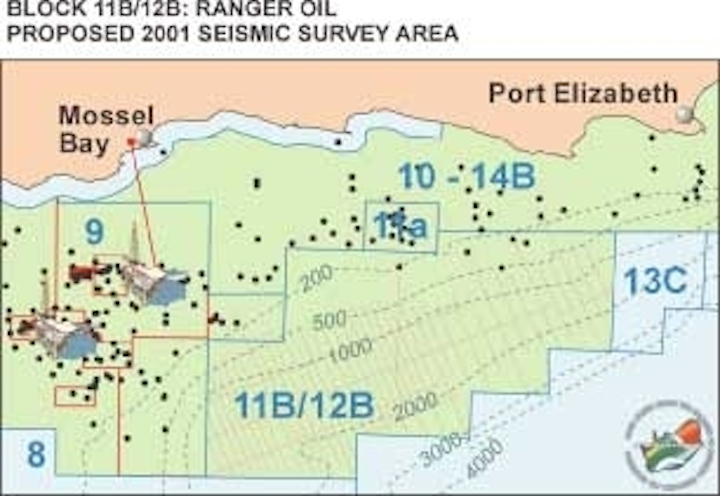 Late in January, the South Africa Minister of Minerals and Energy approved the award of a natural oil prospecting sub-lease to Ranger Oil Limited over blocks 11B and 12B offshore the south coast of South Africa. The first of five agreement periods covers 24 months, during which Ranger will acquire and process approximately 3,000 km of 2D seismic data over the area of interest. Ranger conducted a first-pass technical evaluation that indicates possibly large hydrocarbon bearing structures. This will be the first time that significant exploration data will be collected over the deepwater (500-2,000 meter water depth) offshore south coast.

In late January, Vanco Energy Company began a 3D seismic survey of the Safi Haute Mer and Ras Tafelney licenses off the Atlantic coast of Morocco, the first 3D program ever offshore Morocco. This follows Vanco and Lasmo PLC's November conversion of Safi Haute Mer (Vanco, operator 100%) and Ras Tafelney (Vanco, operator 60%; Lasmo, 40%) to exploration licenses. Through the end of April, CGG's Symphony will survey 3,000 sq km of the two permits on the toe-thrust zone in 1,500-2,000 meters water depth.

With a view toward capitalizing on what they hope will be increased activity on the Norwegian continental shelf, Aker Maritime and Reinertsen AS are forming a joint venture company, Aker Reinertsen JV, to work in the offshore sector off mid-Norway. The partnership is targeting the large contracts now coming up for upgrading and maintenance work on offshore installations in this area. The new company plans to develop technology for the offshore market both independently and through cooperation with other technology companies and institutions in mid-Norway. More than NOK100 billion has already been invested in the area.

Gulf Canada Res-ources Limited ann-ounced first gas from the Q4-A field in the Dutch sector of the North Sea. The gas came onstream in late December 2000. Gulf representatives claim this is the first time in the history of Dutch operations that a field has been brought onstream using a completely refurbished North Sea platform. It took only 18 months from the time of discovery to achieve production. Gulf Canada Resources Limited, through its wholly owned subsidiary Clyde Petroleum Exploratie B.V., is the operator of the block and holds a 29.85% interest in the field. The other partners are CLAM Petroleum B.V., Dyas B.V., and EBN B.V.

In February, Statoil opened the Norne and Heidrun 1,400 km gas export trunkline system for gas deliveries to the European continent. Statoil's Norne field is the northernmost producing field on the Norwegian continental shelf. The trunkline runs from the Norne production ship to the Åsgard Transport line and back to the Heidrun platform. The gas is conveyed through the Åsgard line to the Karst gas treatment plant, before being sent on through the Europipe II export line to Europe. Because the 400-meter water depth precludes the use of divers, the project has utilized new technology to remotely control tie-in of pipeline and valve modules on the seabed.

In February, Indian Petroleum Minister Ram Naik announced that India's ONGC Videsh Ltd., the overseas E&P arm of state-owned Oil and Natural Gas Corp. (ONGC), will formally acquire a 20% stake in Russia's Sakhalin 1 oil and gas field. Indian and Russian governments have already given approval for this joint venture exploration project. At 80 billion rupees, this is the largest oil and gas project India has ever approved for foreign investment. ONGC Videsh will buy half of RAO Rosneft's 40% stake in Sakhalin 1 project, located off the coast of the Russian island of Sakhalin. The site holds an estimated 2.5 billion bbl of oil and condensates and 425 bcm of natural gas. ExxonMobil holds 30% of Sakhalin 1 and is operator of the project. The Sodeco consortium of Japan holds 30%. The remaining 20% is held by Rosneft.

Dragon Oil announced that drilling began on the first of three planned wells on the Lam Field, in the Cheleken Contract Area offshore Turkmenistan in the Eastern Caspian Sea. The first well, Lam 22-101, is expected to take 60 days to drill and 30 days more to complete. The well is targeted to extract reserves in the Red Series formation of the Lam Field. Oil is anticipated from a depth of approximately 2,000 meters to the proposed total depth of approximately 4,300 meters. The oil produced will be processed through the existing infrastructure. Dragon Oil exports its share of this production through a swap deal with Iran. Dragon plans to drill two more wells in this development program. Lam 22 has the scope for a total of six new wells if the findings from the initial wells warrant additional drilling.

TotalFinaElf SA has begun development work on structure B of Block 137, an oil field 100 km offshore Libya in 90 meters water depth. The plan at this stage calls for oil production startup in early 2003 from a platform connected to a floating producer. Production is expected to plateau at 35,000 b/d. (TFE operator 37.5%; Libyan National Oil Corp., 50%; Wintershall AG, 12.5%)