Vanco Energy is stepping out into new territory offshore Madagascar. 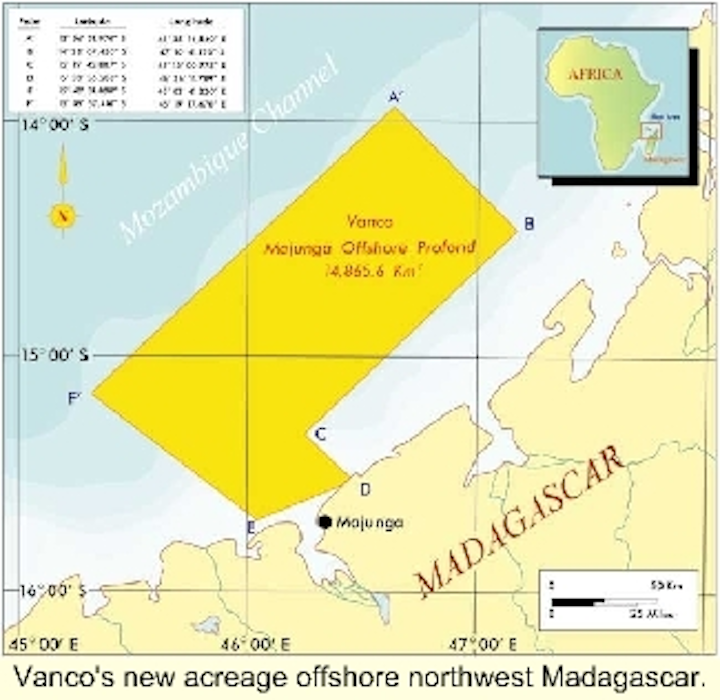 Vanco Energy is stepping out into new territory offshore Madagascar. After a year of evaluation, the company signed a contract for the Majunga Offshore Profond Block in the deepwater Majunga Basin offshore Madagascar, which until now has been a little-explored region. The basin covers 3.67 million acres off the northwestern shore of the island.

No drilling will take place immediately. Instead, Vanco will continue to gather geophysical data, initially a two-year 2D seismic survey, which will begin in May. This block is Vanco's first license offshore East Africa, a new frontier for the company.

Since the country's first offshore license was prepared and awarded in 1996, Latvia has been planning for an offshore licensing round. Latvian officials expect to entice foreign investors with favorable terms. The Latvian State Geological Survey has made detailed geological information available to prospective investors.

Norsk Hydro awarded Kværner Oil and Gas the contract valued at NOK500 million to build the power generation module and living quarters for the Grane platform. The power generation segment will be built at Kværner Rosenberg in Stavanger. The module is scheduled for delivery on May 1, 2003. Hydro also awarded European Marine Contractor (EMC) in London the contract for the offshore installation of pipelines for the Grane project. The contract value is estimated at NOK 400 million. EMC will use its installation vessel Castoro Sei to lay pipe, beginning in the summer/fall of 2002.

Noble Affiliates, Inc. indirect subsidiary, EDC (Europe) Limited, received UK govern-ment approval to develop the Hannay field in Block 20/5c of the North Sea. The estimated reserves of Hannay field total 8 million BOE. The $50 million development project is scheduled to begin in May, with production at 12,000 b/d to begin in November.

The North Caspian Sea Consortium completed drilling of the Kashagan West 1 well in mid-March and announced that hydrocarbons were detected. When logging activities are concluded, test results will determine if the consortium will develop the area. The Kashagain West 1 well was spudded last October. It is the second exploration well in the Kashagan structure. The Sunkar drilling rig will begin an appraisal drilling campaign in the second quarter.

The project, which involves building an oil rig on a submersible platform in the northern province of Mazandaran, will take nearly three years to complete. This contract marks Iran's first exploration attempt in the Caspian Sea. The five littoral Caspian states have not reached an agreement about how they will divide the sea and its riches.

Petrobras is beginning development in three fields. Oceaneering International, Inc., affiliate Marine Production Systems announced the award of a letter of intent from Halliburton to supply subsea umbilicals for the Barracuda and Caratinga Fields, located in 1,000 ft water depth in the Campos Basin off Brazil. Estimated contract value is approximately $30 million. The anticipated umbilical delivery date is September 2002.

Petrobras also awarded FMC Corporation an order to supply a subsea manifold and associated subsea controls for the Marimba Leste field, off Brazil. The order is valued at $15.3 million and will be delivered to Petrobras in 2002.

Ziff Energy Group, Calgary, announced the results of a study that shows production from the Scotian Shelf off Canada's east coast could reach 1.2 Bcf/d by 2005 and could increase to more than 2 Bcf/d after 2005. The study predicts that Nova Scotia will become a major gas-producing basin in North America and could contribute to the gas supply of the US Northeast and Canada's maritime provinces.

Canadian Superior Energy Inc., Calgary, expects to spud a wildcat on the Marquis Prospect 20 km northwest of Sable Island, Nova Scotia, by September. Canadian Superior is planning a multi-well drilling program in the area over the next 18 months to explore what has been identified as major Abenaki reefs underlying the company leases.

Repsol YPF announced the discovery of three new fields in the West Madura Block offshore eastern Java, Indonesia. Three exploration wells (KE23-1, KE13-1, and KE24-1) were drilled in separate structures in the Kujung limestone, yielding a total of approximately 6,300 bbl of oil and condensate per day, and 30.1 MMcf/d of natural gas. Preliminary estimates of recoverable reserves for the three fields are 13 million bbl of oil and condensate and over 153 Bcf of natural gas. Repsol YPF, through its affiliate YPF Madura Barat B.V., is the operator (25%). Pertamina, the Indonesian State Oil Company (50%), and Kodeco Energy Co. Ltd. (25%) are also stake holders.