Alcatel Kabel Norge has renamed itself Nexans Norway, but remains part of the French group Alcatel, and is still committed to serving the same markets. 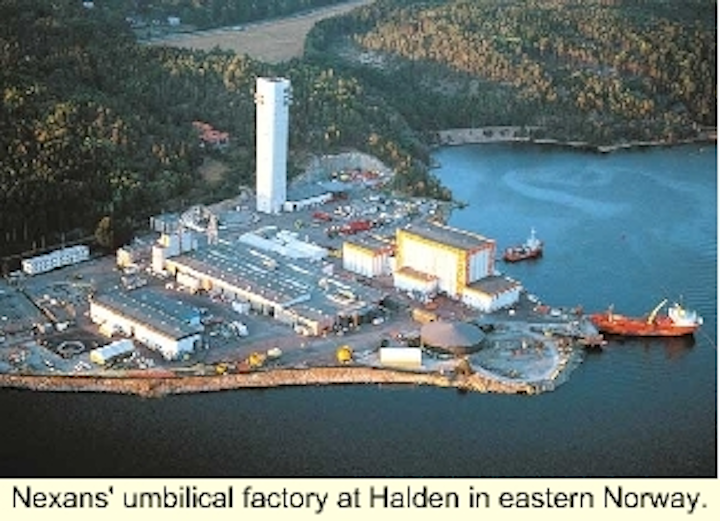 Alcatel Kabel Norge has renamed itself Nexans Norway, but remains part of the French group Alcatel, and is still committed to serving the same markets. The company is currently surfing the wave of expanding activity in the offshore sector around the world. It suffered along with many others when oil prices collapsed in 1998, the same year that liberalization of the power market in the European Union undermined the market for high-tension cables. Better times have now returned, and Nexans' turnover was up to NKr 2 billion last year. It has three main markets, all providing similar revenues - power cables, installation services, and umbilicals.

Nexans is benefiting from the increasing incidence of subsea production, whether for short stepouts in mature areas like the North Sea or demanding applications in deep waters that often involve lengthy tie-backs. According to Tor Hurlen, vice president for the high-voltage cable division, it has a healthy order-book in its main markets - Brazil, the Gulf of Mexico, and the North Sea - and great expectations for West Africa, where it is working hard to increase its market share.

The company currently has a large workload, which includes orders for Norsk Hydro's Tune, Visund, and Troll Oil projects (all in the North Sea), Shell's Crosby and Nakika in the Gulf of Mexico, plus another project in Sarawak and BG International's Scarab Saffron project offshore Egypt.

It can cope comfortably with these demands at its Halden manufacturing plant in eastern Norway, where it can turn out 2,000-3,000 meters a day of umbilical, depending on the complexity and size. But it is open to the idea of building new plants in Brazil and the US, if the workload and market prospects in these markets call for it, Hurlen says.

The company is at the leading edge of deepwater development. "We've qualified umbilicals down to 2,000 meters for use on Petrobras' Roncador Field," says Hurlen. "As far as I know, we're the only company to do that so far." Its deepest installation will be for Shell's Nakika project in the Gulf of Mexico, at 2,300 meters. Delivery is due in 2003. It already has installations of 1,800 meters in Brazil and Shell's Mensa in 1,647 meters in the Gulf of Mexico, under its belt.

Nexans takes ever-longer tiebacks to host facilities in stride. Length is not a technical problem, says Hurlen. The company has supplied power cables up to 200 km long. The challenge lies in the logistics, where there are limitations in the size of reel that installation vessels can accommodate.

The amount of cable that can be wound on a reel, of course, depends on its diameter. In the case of the Scarab Saffron project, where Nexans has won the umbilical order and is also bidding for installation, it will install two 90 km umbilicals in one load using the Skagerrak cable-lay ship.

The company spends 2.0-2.5% of its turnover - NKr 45-50 million annually at present - on research. The major area where technological development is required is in new materials for packing the umbilicals which will reduce the bulk and weight, thereby allowing length to be extended. The company has studied the suitability of some composite materials but not yet found a satisfactory solution.

Steel is another area in which research is continuing. An alternative to the super-duplex often specified for the steel tubes would be desirable, not only because of high cost, but because supplies of the metal are not abundant. In this case, Nexans is working closely with its main steel suppliers, Sandvik, Sumitomo, and DMV, Hurlen says.

The company has refocused its activities where installation is concerned. It is the owner of one cable-lay vessel, Stanelco, and has a frame agreement for the use of the Skagerrak with Havila, which acquired the vessel last year. This arrangement enables Nexans to maintain its strategy of bidding for turnkey supply-and-install contracts.

Trenching, however, remains an in-house activity. The company currently operates three machines. "We want to be among the leaders in this area," says Hurlen. In 2000, the company enjoyed its best ever year for trenching, with a lengthy assignment on Statoil's Åsgard Field during which it trenched several hundred km of both pipelines and umbilicals, and also performed jobs in the Danish sector and the Mediterranean.

Although CapJet was originally developed to trench cables, with some modifications, it can also trench pipelines up to 40-in. in diameter. It is the only trenching machine based on the water-jetting principle that has done so to date, Hurlen says. By extending its capability Nexans is able to secure better employment for the tool.

The direct heating system for subsea pipelines which Nexans developed in cooperation with Thermotite for the DeepStar consortium has found application offshore. The system provides a solution to the problems of flow assurance.

If the pipeline has to be shut down, the heating system can be activated to maintain the contents of the line above the temperature at which hydrate or wax formation takes place.

The first such line was installed last year on the Åsgard Field, and a 16-km system has now been supplied to Statoil's Huldra development. The system is interesting for deep-water areas such as Brazil and the GoM where it offers an alternative to trenching and other flow assurance methods, Hurlen says.

Another matter of interest to oil companies, not least as longer tiebacks become more common, is the direct supply of power from shore to offshore facilities.

Norsk Hydro considers this option for its subsea developments lying close to shore, such as Fram, and for these possible applications Nexans has developed a cable system for a 100 kV dynamic XLPE insulated cable. A related product is inter-platform subsea power cables. Nexans recently supplied such a cable to Hydro to link the Snorre TLP (tension leg platform) with the new Snorre B platform.

Nexans has also carried out some concept studies and supplied prices for BP's proposed system for replacing offshore power generation by power supplied from shore for a network of platforms in the North Sea.