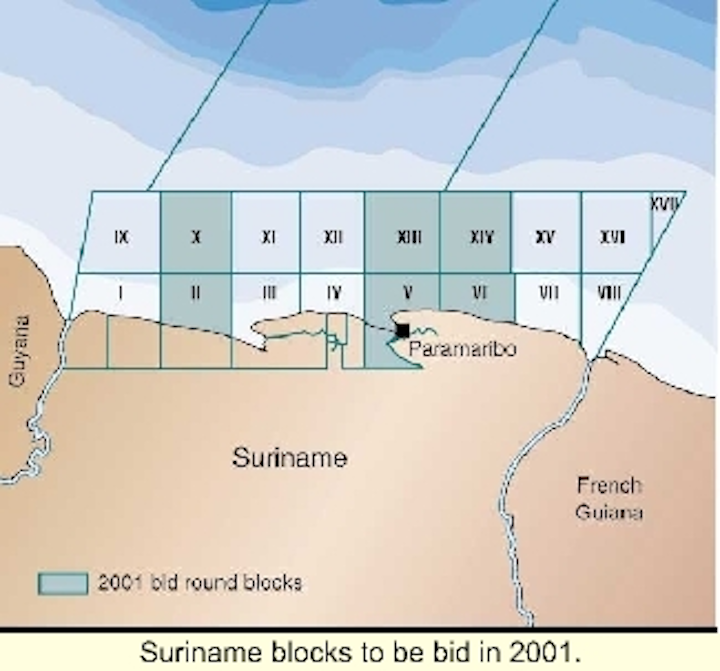 The US Geological Survey estimates potential reserves in the Guyana-Suriname basin at 15 billion bbl of oil reserves, but last year's offshore boundary dispute with Guyana has produced some caution on the part of oil and gas producers interested in Central Atlantic/Eastern Carribean opportunities.

Last June, Suriname's military interrupted CGX Energy, Inc.'s offshore drilling operations and forced the company to move to another area, claiming that CGX was operating in Suriname's territorial waters. According to a representative of Suriname's state oil company, Staatsolie Maatschappij Suriname N.V., the incident wasn't a result of over-reaction.

The conflict was preceded by written warnings sent to Guyana authorities, as well as to the producing companies who had signed contracts with the Guyana government, informing them that the planned drilling was in territory Suriname believed fell within its boundaries. When these letters went unaddressed and CGX commenced drilling, Suriname resorted to force, calling in its Navy and forcing CGX to abandon the site.

The boundary dispute continues today. Guyana maintains that Suriname violated its territory. The Suriname government insists that the area in question belongs to Suriname. Several rounds of talks to resolve the ownership issue have taken place, but the countries have not yet reached an agreement. Although the dispute persists, Suriname says it is committed to enticing investors into neighboring areas of the potentially lucrative Suriname-Guyana Basin.

By opening a bidding round at the end of this year, Staatsolie is hoping to change the financial outlook for its offshore reserves. Staatsolie was founded in December 1980 and has exclusive rights to explore and produce petroleum alone or in cooperation with other oil companies. Most oil exploration has taken place onshore, producing moderate results.

A small refinery with a processing capacity of 7,000 b/d has been in operation since 1997. At present, crude not processed in Suriname is exported to Guyana, Trinidad, Barbados, and the Eastern Caribbean.

As agent of the state, Staatsolie has negotiated and signed petroleum contracts since 1980 with several international petroleum companies as a result of direct contacts. Staatsolie's first competitive bid to outside investors took place in 1998, when the company invited six international oil companies to bid on onshore and offshore areas.

In 1999, Staatsolie signed a production sharing contract with the Suriname Deep Water Consor-tium, made up of Shell, Burlington, TotalFina, and Korea National Oil Corporation. Following this contract, a seismic survey totaling 6,600 km of new 2D seismic lines was acquired, processed, and interpreted.

In 2000, Staatsolie implemented the first stage of a four-year expansion program with the goal of increasing crude oil production from 12,000 b/d to 20,000 b/d. The company is planning to invest about $108 million to implement measures to reach this target

In January of this year, Staatsolie contracted with WesternGeco for a 4000 km 2D seismic survey over a 4 km-by-8 km grid and acquisition of a 1,000-km bottom cable survey in shallow waters nearshore Suriname. This survey was scheduled to conclude by the first week of April. The hope is that the data will lead to a better understanding of the field's characteristics and will ultimately lead to greater production.

Staatsolie is planning for its first competitive international bidding round to take place in November. A lot of promising geophysical data has been gathered. Now, according to Marny Daal-Vogelland, Staatsolie E&P Contractors Administrator, "the aim is to have commercial production in offshore Suriname."

The competitive bidding round scheduled for this year will alert majors and smaller independents of the opportunities in the area. A total of 22 blocks will be bid over the next five years. Daal-Vogelland pointed out, "the blocks that are part of the Suriname 2001 International Bidding Round are not part of the area that is disputed."

Staatsolie's timing is good. Discussions with several oil companies last year indicated an interest in Suriname. Staatsolie followed up by contracting geophysical surveys and carving out data blocks that Daal-Vogelland said "were formed large enough to make them attractive and small enough to trigger the interest of smaller companies."

With the hike in this year's E&P budgets and the increasingly positive business climate, Suriname's opportunities are improving. After conducting talks with several companies, Staatsolie determined there was enough interest in the Guyana-Suriname basin to warrant ramping up pre-bid activities. After selecting and evaluating geological and geophysical data from past surveys, Staatsolie took a look at the available area and delineated blocks based on the data.

Staatsolie contracted with WesternGeco to gather new data and alerted the industry that the seismic survey was underway. WesternGeco has completed data acquisition of the 600-km, ocean-bottom cable phase of the multi-client survey offshore. This shallow-water segment completes the survey WesternGeco began in January. In total, more than 5,000 km of 2D seismic data were acquired. Sample survey results were presented at the AAPG conference the first week of June. Additionally, Staatsolie will host technical seminars in Houston and London to attract investors.

In the meantime, Staatsolie is creating incentives to bring more companies to the bidding round. The company is offering exclusive rights to explore and produce petroleum and is providing investors the freedom to bring in and repatriate funds used in the petroleum activities to and from Suriname. Commercialization is free in both national and international markets. And Suriname is not imposing import or export duties on industrial resources, goods, or equipment that will be used in the petroleum industry. There will be no surface rentals assessed, and royalties will be negotiable. A final plus is the sizable pool of highly skilled local labor, which is an incentive in an industry that is strapped for qualified personnel.