Norway's Petroleum and Energy Ministry has offered 56 new production licenses to 29 companies under the country's latest Awards in Predefined Areas (APA) round, of which three are in the Barents Sea, 17 in the Norwegian Sea, and 36 in the North Sea. 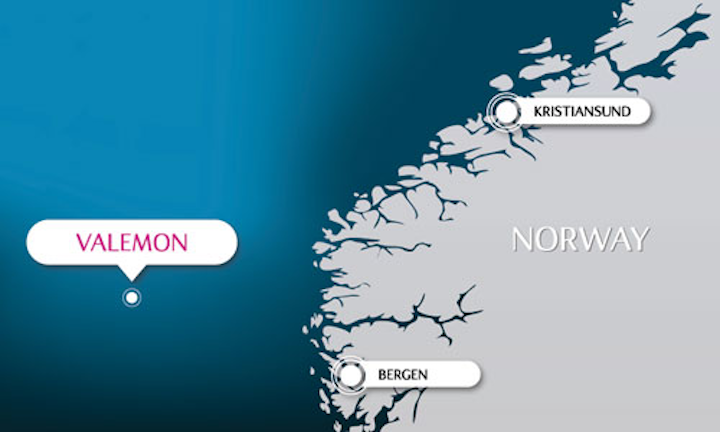 Norway’s Petroleum and Energy Ministry has offered 56 new production licenses to 29 companies under the country’s latest Awards in Predefined Areas (APA) round, of which three are in the Barents Sea, 17 in the Norwegian Sea, and 36 in the North Sea. The Norwegian Petroleum Directorate pointed out that 16 of last year’s 18 discoveries offshore Norway were on APA acreage, and Statoil continued the trend earlier this year with a 20-80 MMboe find on the Cape Vulture prospect. In the process, the well proved a new play just 5 km (3.1 mi) northwest of the company’s Norne field production complex.

Statoil followed up with a gas/condensate discovery with a similar resource range on the west flank of its high-pressure/high-temperature Valemon field in the North Sea. The company and partner Wintershall plan to drill a deeper-water prospect on one of their new APA licenses in the Norwegian Sea, PL894, in attempt to prove further gas/condensate for development through the new facilities serving the Aasta Hansteen field.

In the southern Barents Sea, Lundin claims to have proven 30-100 MMbbl of oil via back-to-back wells on the Filicudi prospect, 30 km (18.6 mi) northwest of the company’s Alta and Gohta discoveries on the Loppa High in the southern Barents Sea. Lundin planned follow-up appraisal drilling to test upside potential, and has identified up to 700 MMboe from other prospects on the Filicudi trend. It could drill two of these, Hufsi and Hurri, later this year.

Aker BP expects the Statoil-led partners in the North Sea Johan Sverdrup project to approve a fifth platform later this year under the Phase 2 development. This would increase oil production capacity (the full-field target is 600,000 b/d), and would be accompanied by a power-from-shore scheme encompassing Sverdrup and other producing fields in the Utsira High region. Aker BP has incremental plans too for some of its operated fields, notably the Valhall Flank West project in the southern Norwegian sector, where it plans to add a normally unmanned platform with 12 well slots to further develop the field’s Tor formation.

Another project on the drawing board for is a new hub north of the Alvheim complex, an area currently short of offshore infrastructure. This would receive production from the undeveloped Frigg Gamma Delta and Langjfjellet discoveries and the reactivated Froy field. Aker BP plans a floating or fixed production facility to serve as the hub, connected to subsea structures or unmanned wellhead platforms on individual reservoirs based on their size or complexity. It could decide on the concept later this year.

Elsewhere in the North Sea, Wintershall and its partners have chosen a subsea tieback to the ENGIE-operated Gjøa platform as their preferred development concept for the Skarfjell field.

Analyst Wood Mackenzie has forecast a record year for merger and acquisition (M&A) activity on the UK continental shelf. This is in part due to divestments by the majors and utilities looking to exit the play, while private equity groups look to take their place, attracted by the sector’s recent success in cutting North Sea operating costs and increasing cash flow.

Three major deals have already been agreed to in principle, with Shell planning to sell the operated stakes in UK gas fields that came with the acquisition of BG Group last year to Chrysaor. The package, valued at up to $3.8 billion, would include 10% of Shell’s 55% stake in BP’s Schiehallion re-development west of Shetland, and a share of the undeveloped heavy-oil Bressay field in the East Shetland basin. Chrysaor, which hitherto has been a minor player in the UK offshore, would suddenly become the leading UK independent, netting production of around 115,000 boe/d. Investment group EIG has provided funds for the deal, with various ex-Shell and Apache directors joining Chrysaor’s board to oversee the company’s transformation.

EnQuest has agreed to take on operatorship from BP of the Magnus oil field, associated pipelines, and the Sullom Voe terminal on Shetland under a transfer valued at $85 million. EnQuest also has the option to purchase BP’s remaining 75% interest in Magnus and the pipelines for $300 million, with BP retaining 50% of net cash flows from the assets up to a maximum of $1 billion. The London-based independent, which had reportedly been struggling with financial difficulties, plans to cover the cost of the transaction via a mixture of cash and future cash flows from the assets.

Brent removal plan out for review

Consultations have started on Shell’s plans for decommissioning the Brent oil and gas complex in the UK northern North Sea. The Brent field, 115 mi (185 km) northeast of the Shetland Islands, has been a lynchpin of UK offshore production, generating around 3 Bboe since start-up in 1976. However, only one of the four platforms, Brent Charlie, is still active, the other three having ceased operations progressively between 2011 and 2014.

Brent C will continue producing for several years to come, but Shell has included the structure in its decommissioning plan. The company recommends removal of the topsides and upper steel jacket on Brent A, the topsides of the other three platforms, debris on the seafloor, and oil contained within the concrete storage cells of the gravity base structures (GBS) supporting Brent B-D. It proposes leaving in situ the GBSs, the sediment in their storage cells, the Brent A footings, and drill cuttings piles. Shell has also detailed the options for the 28 associated subsea pipelines.

The Norwegian Petroleum Directorate (NPD) has formally sanctioned expansion of the gas plant at Nyhamna in western Norway, which has received production from Norske Shell’s deepwater subsea-beach Ormen Lange development in the Norwegian Sea since 2007. One component of the new program is the installation of a new land-based compressor to maintain gas pressure at Nyhamna as pressure in Ormen Lange’s reservoir falls. During the mid-2020s, Shell also expects to add compression closer to the field, possibly subsea, to sustain or step up gas production.

NPD’s approval extends to use of additional export and process facilities from the new Polarled pipeline, which Allseas recently laid from the site of Aasta Hansteen, Norway’s deepest-water project to date, to Nyhamna. Hansteen is due to start service next year, with Polarled compression and gas export set to become operational in fall 2018. Gas from DEA’s Dvalin field will likely be the next to transit through Polarled from 2020. These measures should raise Nyhamna’s export capacity from 70-84 MMcm/d - all the gas is directed to the UK via a pipeline that connects to the Sleipner A platform in the North Sea.