This month, Infield Systems looks at offshore capex distribution offshore for Asia/Pacific up to 2019. 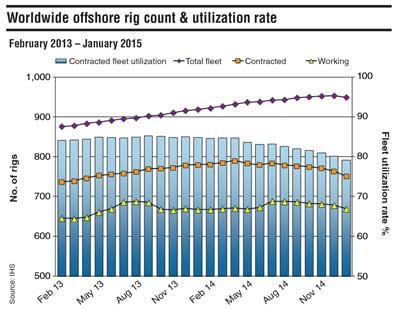 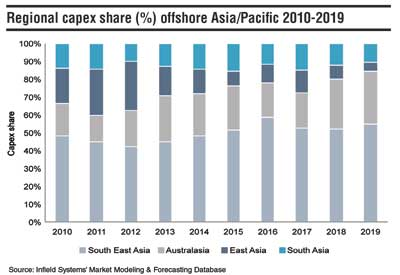 This month, Infield Systems looks at offshore capex distribution offshore for Asia/Pacific up to 2019. The region is characterized by emerging economies, with increasing energy demands, which could lead to an increase in offshore oil and gas activity. Offshore capex demand within the region could increase by 36% in comparison to the last five years, with Southeast Asia anticipated to account for 54% of this demand. Malaysia and Indonesia could continue to play pivotal roles in offshore growth in the region, with both countries needing to secure their growing energy demands as well as continuing to supply their overseas export obligations. Malaysian national oil company Petronas is currently forecast to account for the largest share of Southeast Asian capex (20%), with Malaysia being the mainstay of its investment.

Activity in Australasia is likely to continue to be dominated by Australia, which is a net exporter of energy. The country's ideal geographic location to the energy-hungry Asian markets will help drive its continued offshore investment and support future growth for its LNG exports. Woodside- and Chevron-operated projects are anticipated to be responsible for the largest proportion of the country's offshore capex demand, together accounting for 39% of the Australia's expenditure requirement.

East Asia is dominated by China's offshore activity. However, the country is projected to experience lower levels of offshore expenditure in comparison to the historic period, stemming from a potential decline in future offshore field developments. This could have a potential impact on CNOOC, which is a major contributor toward offshore activity in the country. South Asian capex demand is expected to continue to be largely driven by India, with activity in the country anticipated to increase; influenced by its need to supply its growing energy demand. ONGC could have the highest capex demand in the country (61%), with its developments in the offshore Krishna-Godavari basin and the Mumbai offshore area potentially attracting significant investment over the upcoming period.
–George Griffiths, Research Analyst, Infield Systems