Since 2014, unit operating costs on the UKCS have halved from $30/bbl to $15/bbl, testament to the changes made and proof that it is still possible to make money in the North Sea, even at the current oil price. Over the intervening period, MOL has leveraged its strengths in exploration, development and production in both the UK and Norway, and there is scope for further adjustments to make North Sea investment more beneficial, even in a $50/bbl world. 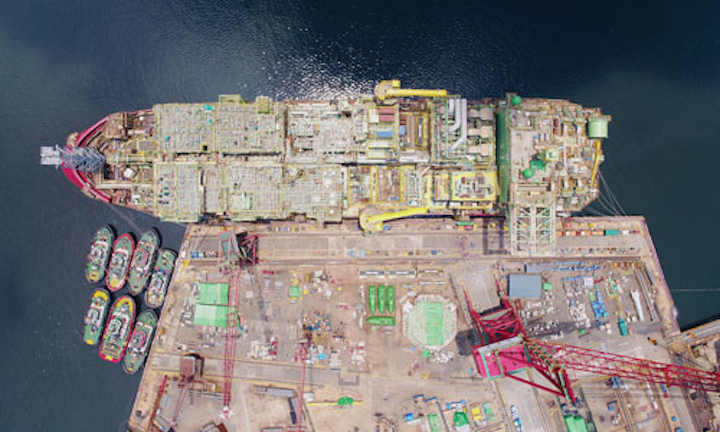 “May you live in interesting times” goes an old Chinese saying - and MOL Group’s first few years in the North Sea have certainly been full of incident. When the company entered the basin in late 2013 the crude price stood at over $100/bbl - six months later, the slump in prices began and persists to this day.

With around $60/bbl needed just to sustain current production levels on the UK continental shelf (UKCS), it has been a very challenging couple of years, with the prolonged downturn in prices prompting a shift - which MOL hopes is a permanent one - in the industry’s behavior and business models. Since 2014, unit operating costs on the UKCS have halved from $30/bbl to $15/bbl, testament to the changes made and proof that it is still possible to make money in the North Sea, even at the current oil price. Over the intervening period, MOL has leveraged its strengths in exploration, development, and production in both the UK and Norway, and there is scope for further adjustments to make North Sea investment more beneficial, even in a $50/bbl world.

MOL Group is an integrated, international oil and gas company, headquartered in Budapest, Hungary. It is active in over 30 countries with an international workforce of 25,000 people. The company has over 75 years of experience in E&P, with a current portfolio that includes oil and gas exploration assets in 13 countries, and production in eight countries. Beyond its core region, central and eastern Europe, MOL Group has established a presence and entered partnerships in the North Sea, CIS region, the Middle East, Africa and Pakistan.

With average production of around 110,000 boe/d, the company’s main strengths are production optimization, enhanced oil recovery, and cost efficiency in mature onshore basins. These have helped it achieve an operating cost below $7/bbl at a portfolio level, while in 2016, its Upstream division generated $270 million in free cash flow.

MOL’s presence in the UK and Norway has grown over the past couple of years. The company entered the UK North Sea in 2014 by acquiring Wintershall UK’s interests and a position in the Scott production hub in the UK central North Sea. Both acquisitions were completed prior to the oil price collapse. The portfolio is a mix of development projects and producing assets; exposure to exploration is limited as the UKCS is presently not particularly attractive to explore.

The Scott area is a mature and strategic hub with numerous stranded discoveries nearby. Elsewhere in the UK sector, the company has interests in the Broom, Cladhan and Scolty-Crathes subsea tiebacks, each at different stages of maturity. The Premier Oil-operated Catcher is MOL’s flagship development project and, at just under $500 million, represents its single largest investment in UK waters. The project is progressing well with all subsea facilities in place, 11 development wells drilled to date, and the FPSO nearing completion in Singapore. In addition, the joint venture has been able to reduce overall project cost significantly.

The mature UK basin is sensitive to oil price levels and MOL’s UK portfolio has clearly been impacted. Reductions in operating costs over the last two years are encouraging but the drive for cost efficiency needs to continue to ensure a longer future for the basin. It requires operators, joint venture partners, and the supply chain to work closely together and share common strategic goals. In this regard, it is good to see the UK and Scottish governments listening increasingly to the views of the offshore oil and gas industry.

On the Norwegian continental shelf (NCS), MOL’s approach has been to build through exploration. This process started in 2015 with the acquisition of Ithaca Norge, and further farm-ins and successful applications in Norway’s licensing rounds have helped to more than double the company’s unrisked recoverable resource potential to 1.2 Bbbl. The most prospective play is the Mandal High in the southern Norwegian North Sea, which has attracted the attention of several Norwegian upstream majors. MOL plans to test the play concept with exploration wells in the next few years.

In the UK, MOL has a non-operated position in all its development and producing assets. Its UK team is small but experienced and can add value by working actively with the operators and other joint venture partners, through undertaking independent technical studies and taking a lead role on commercial issues. Examples are the re-focus of certain infill drilling campaigns to lower-risk targets, and an increased emphasis on the cost efficiency of mature producing assets.

In Norway, MOL operates the majority of its licenses. Its activities are concentrated in core areas in the mature part of the Norwegian North Sea, close to existing infrastructure, which facilitates quick transformation from discovery to producing barrels. These core areas are characterized by massive proven hydrocarbon source volumes, multiple reservoir levels, and the availability of recent 3D seismic surveys. The exploration team applies state-of-the art technology to identify and de-risk new play concepts, including Pre-Stack Pro software. In fact, the Norway team forms the Exploration Center of Excellence for the company’s global E&P division.

Going forward, a key aim for the company in the UKCS is to make use of the tax loss pool that has been built up as a result of three offshore development projects having been completed. For Norway, the company is maturing new play concepts: should exploration prove successful, a logical next step would be to develop these opportunities and at this stage the strategic partnerships established will be vitally important. From a tax optimization point of view, the addition of a producing asset to the Norwegian portfolio would also make sense post-discovery.

The UK and Norway share a common geological setting and operating environment. However, there are significant differences in the commercial, tax, and regulatory regimes which have driven the shape of the company’s portfolios in the respective countries. The UK provides exposure to a higher oil price environment, whereas Norway has a tax regime that encourages exploration. Norway is relatively unexplored compared to the UK with significant resources yet to be discovered. What is particularly encouraging is that Norway’s development costs have come down considerably over the last few years.

In the UK the new regulator, the Oil & Gas Authority, is now more actively engaged with the industry and its concerns. However, MOL believes it is also time for changes to the regulatory and tax regime to reflect the maturity of the basin. The government’s recent abolition of PRT (petroleum revenue tax) and the reduction of SCT (supplementary charge tax) have not been particularly helpful in stimulating new investment and are only beneficial to those companies generating a profit. These are not the newer entrants willing and able to invest in the basin.

The lack of meaningful tax relief on exploration and appraisal drilling should be addressed. In particular, tax incentives for appraisal drilling would help de-risk and mature stranded discoveries. These discoveries are often stranded because de-risking the volumes through appraisal renders the overall project uneconomic. In addition, the fractured equity positions of stranded discoveries and availability of potential host facilities should be addressed using area-wide development plans that allocate the assets to the owners that are most likely to maximize economic return.

At the same time, the uncertainty around tax relief on decommissioning is blocking the transfer of mature assets from unfocussed supermajors to more agile and efficient companies. The ability to transfer the tax positions from seller to buyer is one potential solution, but it would arguably make more sense if the decommissioning liability stays with those companies that have been the beneficiary of the majority of the profit out of the asset in question.

Financially robust joint venture partners like MOL are exposed to the risk of financially vulnerable partners, in particular in cases where the security for decommissioning expenditure is not in place. This is another area where the OGA should play a much more active role and oblige all field owners to have decommissioning security in place in line with joint operating agreements. The existing infrastructure has a finite active lifetime and the inability to develop stranded discoveries will be an opportunity forever lost.

Dr. Berislav Gašo has been MOL Group’s Executive Vice President of Upstream since October 2016. During 2010-12 he was also an Executive Director at Croatia’s state-owned INA, and had previously spent five years with McKinsey & Company as a Junior Partner in the European Petroleum Practice, gaining extensive upstream experience in Western/South Eastern Europe, Russia, Central Asia and the Middle East. Dr. Gašo studied mechanical engineering at the Technical University of Munich and the Massachusetts Institute of Technology. He also studied economics and business administration at the University of St. Gallen and Harvard Business School.

Nico Brunsmann is Managing Director of MOL Energy UK, which he joined in January 2016, and Senior Vice President of MOL Group Subsurface and Field Development. Previously he was the Developments and Operations Director for Verus Petroleum, a private equity-based start-up and prior to that, he held various managerial positions at Talisman Energy over a nine-year period. In the past 26 years, Nico has also worked in commercial, subsurface and operational roles at Amerada Hess, Maersk, Elf and Occidental. He holds a master’s degree in Petroleum Engineering from Heriot-Watt University in the UK.