Floating asset owners are paying increased attention to hull integrity, particularly for assets designed for extended periods on station. Their priorities are to avoid the disruption and costs associated with having to disconnect floating facilities from subsea production systems for unplanned drydock repairs that can occur if major damage goes undetected. The challenge is to obtain useful data on hull condition safely, with minimum production disruption and in compliance with class and/or regulatory requirements. 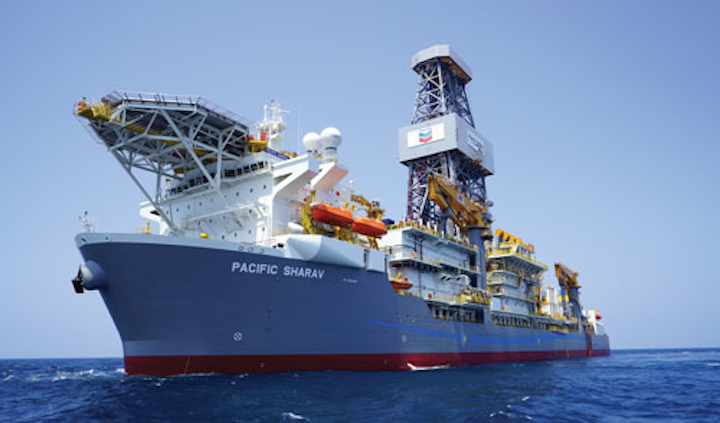 Floating asset owners are paying increased attention to hull integrity, particularly for assets designed for extended periods on station. Their priorities are to avoid the disruption and costs associated with having to disconnect floating facilities from subsea production systems for unplanned drydock repairs that can occur if major damage goes undetected. The challenge is to obtain useful data on hull condition safely, with minimum production disruption and in compliance with class and/or regulatory requirements.

The HITS (Hull Inspection Techniques & Strategy) joint industry project was created as a result of discussions by members of the FPSO Research Forum and has been addressing these and other issues since its formation in March 2011. The strength of HITS lies in the close collaboration of its members representing regulators, operators and class. This helps the JIP achieve its objectives which are to encourage industry to develop solutions for hull inspections, evaluate their worth in practical trials, and bring the benefits to the industry in a short time frame.

EM&I, an asset integrity specialist, is responsible for facilitating HITS. The company has a track record of developing its own ‘disruptive’ inspection technologies for offshore application.

HITS’ first task was to agree the scope, program and priorities, all completed in the first year through an industry-wide survey of existing practices, a study of hull inspection regulatory requirements, and canvassing of the industry’s views on potential areas for improvement. The study concluded that the main challenges that needed to be addressed were improving safety and inspection quality by minimizing diving operations; avoiding man entry into confined spaces; and seeking methods of minimizing tank cleaning for inspection purposes. An unexpected additional challenge that arose later was the need to develop a competency standard for hull inspectors.

The recent collapse in the price of oil has in many ways accelerated the impetus behind HITS, which to date has delivered two safer, cost-reducing solutions for performing underwater hull inspections without divers and inspection of confined spaces without the need for man entry. Both methods have been validated by class and are being used on floating production, drilling and accommodation facilities.

Since its inception, the HITS JIP membership has included oil companies such as BP, Chevron, Shell and Total; an FPSO charterer, SBM Offshore; and four classification societies, ABS, Bureau Veritas, Lloyd’s Register and DNV GL. Petrobras, ExxonMobil and others have also expressed interest in participating. Members meet every six months to review progress and to give guidance to companies tasked with developing innovations: the next meeting is at the 39th FPSO Forum in Galveston in October.

HITS’ progress to date has led to the members sanctioning further extensions to the project, with HITS 1, 2 and 3 scopes completed and HITS 4 and 5 under way. The members recognized that the drive toward remote inspections required a standardized way of assessing the capabilities of the innovations proposed. They decided to do this against a ‘Class Equivalent’ standard, recognizing that, despite the focus on the robotic element, the (human) inspection capability was paramount.

With guidance from the classification society members, HITS defined a ‘Class Equivalent’ standard for general and close visual inspection and commissioned a study to assess the capability of camera systems currently employed by ROVs and UAVs (unmanned aerial vehicles) and measured their ability to detect typical defect types under site conditions. Using these standards, the JIP commissioned a further study on UAVs. Then followed further tests using technology adapted from the gas transport industry to ‘see’ inside isolation valves, with acoustic imaging applied to evaluate the potential to inspect through crude oil, along with practical tests of optical, NDT and laser inspection systems.

Independent specialists performed many of the tests at the Forth Engineering test center in Cumbria, northwest England, which had been set up primarily to develop and test remote inspection, maintenance and decommissioning solutions for the nuclear industry. HITS’ members were clear that the developed solutions also needed to be tested under site conditions before they could be realistically deployed offshore. Several successful developments followed, with various HITS participants making their operating assets available for trials.

The members have since agreed that HITS 4 will also conduct practical UAV and laser scanning field trials on an operating asset. Studies have been commissioned to assess remote thickness gauging techniques, required tank cleanliness standards, and remote methods for coating inspection.

HITS 5 will continue to provide guidance and assist further the development of remote hull and tank inspection techniques with a view to expanding the submerged hull aspect to include mooring chain inspection and alternative means of assessing hull girder strength.

ODIN is an underwater inspection technique that has to date been applied to perform compliant UWILDs (Underwater Inspection in Lieu of Drydocking) on 14 offshore facilities, including ABS, DNV GL and Bureau Veritas-classed assets operating offshore Brazil, West Africa, America, and Asia. The technology is diverless and employs a combination of technologies to inspect the hull structure and critical isolation valves in-situ; a mini-ROV to inspect the external condition; and corrosion protection systems of the hull and other specialized cameras and tools to inspect the turret and mooring systems.

Unlike diving, ODIN is not weather sensitive and does not affect production or on-hire time, which is especially important to drilling contractors. Isolation valves are also critical to a hull’s integrity and must be able at all times to open and close reliably. Divers will typically either blank off the valves for internal removal or apply a boroscope to observe them close-up, but this does not provide a detailed view of the valve’s fitness for service.

With ODIN a miniature camera is inserted through a port welded to piping close to the valve using a hot tap method. The valve is inspected and function tested under normal operations without the need for divers or blanking plates.

A Valve Criticality Assessment prioritizes the work and inspections are possible on valves from 8-in. OD upwards. A 100% ultrasonic scan of the sea chests and stub pipes from inside the hull completes the class requirements.

The technique has evolved into a maintenance tool for isolation valves which can now be repaired using inflatable bladders inserted through the ODIN ports to effect a double block seal, after which the valves and associated piping can be removed for remedial action or replacement. Last year the technique was applied to over 10 projects. With no divers required the inspection is not weather dependent, and with a team of only four technicians needed to install and operate ODIN, personnel on board requirements can come down by over 75%.

Initially, the mini-ROV performs a one to two-day fly-past over the hull to inspect external features such as sea chest inlet grids, rudders and propellers. If any items are shown to need cleaning, this too can be performed by the ROV using specially designed cleaning equipment. Mooring chains are also cleaned, inspected, and measured to comply with class requirements.

A related innovation is EM&I’s ‘20 Year Plan.’ Most floating offshore assets have to undergo periodic surveys every two and a half and five years to satisfy class and flag state requirements. The company introduced a continuous hull survey program over 15 years ago to avoid the disruption caused by having tanks cleaned and kept out of service and has now aligned the ODIN underwater and hull programs so that both inspection programs can be spread evenly over a much longer period. This provides operators and class with regular, holistic hull condition data to help their planning. SBM Offshore and ABS have both implemented the 20 Year Plan.

There is also strong interest in ODIN from the drilling sector. On drilling vessels or MODUs, one big challenge is inspecting critical welds in the moonpool area during drilling operations - ODIN handles this via a combination of cameras and carbon fiber manipulators. Drillers typically will avoid using diver-based methods if their vessels are on hire, especially if in DP mode using thrusters, as this would be too dangerous. Moonpools are also very turbulent areas where diver operations are hazardous. The diverless ODIN approach has been applied to date on drillships, semisubmersibles and jackups, both in operation or warm stacked. Drilling contractors that have used the system include Seadrill, Ensco, Pacific Drilling, Ocean Rig and Vantage. EM&I is also working with FLNG/FSRU and barge operators to develop applications for their requirements.

The NoMan concept arose out of a requirement by the HITS participants to seek methods that avoid putting personnel into confined spaces for cleaning and/or inspecting tanks. Development initially entailed a study to identify what tank inspections should set out to achieve, and the type and location of typical critical defects. The Classification society members were significant contributors to this study, which concluded that the class equivalent survey requires a general visual inspection followed by a close visual inspection of known critical areas. The structure then needs to be checked for any damage or distortion and any areas shown to be corroded, cracked or otherwise damaged would need to be further examined with additional inspection techniques.

Development of NoMan started by trialing high-performance cameras provided by Visatec in Germany (and developed originally for the nuclear industry) to perform general and close visual inspections, with the camera - held on a carbon fiber pole on an articulated arm, placed in predetermined locations through existing deck openings to allow the necessary inspection coverage. The cameras used provide pan, tilt and zoom facilities and self-sufficient integral lighting. These units are watertight to a depth of 50 m [164 ft], and can operate both in and out of water. EM&I, on behalf of HITS, is currently seeking Ex certification.

Once the visual surveys have been completed the camera is replaced with a laser scanning tool which provides accurate dimensions of internal fittings and any structural distortion. The NoMan method also includes a mini-ROV capability for close-up inspections, ultrasonic gauging, coating measurements and other type of non-destructive testing (NDT) in ballast tanks filled with water. EM&I believes there is potential to develop the laser concept to perform remote thickness gauging and other NDT tasks, and that task-specific ROVs could be developed to improve the inspection and further reduce costs.

To date NoMan has been used for class and regulatory compliant inspections on water ballast tanks in drillships, cargo oil tanks in FPSOs and on a range of pressure vessels.

Independently of HITS, EM&I has developed HullGuard, a class-accepted Impressed Current Cathodic Protection (ICCP) system for floating offshore installations. HullGuard employs a cylindrical shaped anode, inserted through the hull via a pressure tight port. This enables the anode to be installed and withdrawn for maintenance and/or replacement over the life cycle of the asset without diver or ROV intervention. The first UK North Sea unit has already been modeled and is now set for installation later in 2017.