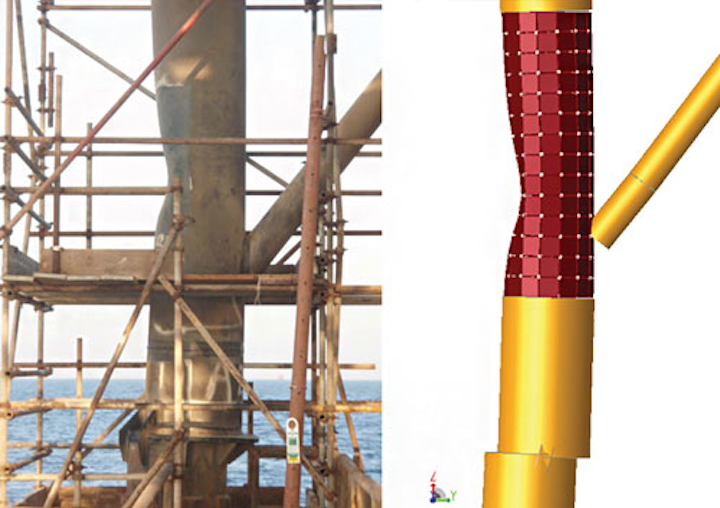 Upper Zakum offshore Abu Dhabi is the world’s fourth largest oil field. Zakum Development Co. (ZADCO) develops the field on behalf of Abu Dhabi National Oil Co. (ADNOC) and the joint venture between ADNOC, ExxonMobil, and Japan Oil Development Co. When a 1,600-ton marine vessel hit an operating wellhead platform on the field, ZADCO had to evaluate and reinstate the structural integrity of the platform before oil production could resume. In the wake of the ship’s collision, the unrepaired wellhead platform was determined to be able to survive seasonal storms, but could only support the landing of helicopters and the docking of light vessels.

With production shut down until repairs could be implemented, ZADCO needed to assess and repair the facility as quickly as possible so that it could be returned to service and associated losses could be minimized. This had to be accomplished while mitigating risk, ensuring safe startup, and avoiding environmental pollution. Moreover, the accident and resulting damage had to be substantiated in such a way that the insurance claim would repay the losses incurred.

Performing a structural analysis of the platform was complicated by several factors. There was no current SACS model available to jump-start the required analyses, and the vessel speed data required for modeling the impact of the accident was unreliable. In addition, the platform piles were driven into weak-to-hard rock, making it difficult to model the non-linear soil-pile interaction in combination with a non-linear inelastic structure.

The non-linear boat impact analysis performed in the SACS Collapse module helped to accurately simulate the post-impact behavior of the platform and the spread of damage, which included buckled deck and jacket braces, a dented and ruptured deck leg, and platform deformation. Vessel speed at the time of impact was assessed by comparing damage measurements: the ship impacted the deck leg with an estimated force of 485 metric tons (534 tons), causing a 6.6% loss in platform strength.

ZADCO undertook a linear static in-place analysis, including soil-pile structure interaction, to assess the damage and verify whether the platform’s primary members and piles were safe for a one-year storm event. The team also performed detailed dent mapping and subsea and topsides inspections.

To estimate the percentage of the platform that suffered degradation due to the impact, the team conducted pre-impact, post-impact, and post-repair ultimate strength analyses, and then tabulated the resulting reserve strength ratios.

Use of SACS for the impact analyses allowed ZADCO to optimize the scope of the inspections and focus attention on critical subsea nodes (weld joints) that required a more detailed review. The optimized scope and schedule allowed work to be performed within the narrow window dictated by weather conditions. Planned subsea inspections by divers were reduced from 134 days to 34 days - a 75% saving of inspection time, representing an $850,000 savings in project costs.

The inspection reports, supported by accurate impact analyses, damage assessments, and pushover studies, provided documentation for the required short-term repairs and technical substantiation for the insurance claim to cover the losses resulting from the accident.

Subsequently the platform was repaired and its structural integrity restored, so that the wellhead could be certified for operation and reinstated for production in line with health and safety environment requirements. The understanding of post-impact behavior gained from SACS analyses helped ZADCO execute the stage-wise release of the platform, allowing it to become operational earlier than anticipated. Production resumed with the platform restored to near full pre-impact capacity.

By performing the preliminary analyses in-house, optimizing the scope of inspections, and outsourcing the detailed engineering for short-term and final repair packages, ZADCO significantly reduced the project delivery time and costs. The only major outlay as a result ($1.15 million) was for the repairs required to reinstate structural integrity. These savings, together with those realized on inspection costs, amounted to 70% of the total cost of the project - which was fully recovered as a result of the insurance claim.

Having a defensible estimation of post-impact platform capacity also helped the company to lessen the risk associated with this project. By identifying and mitigating possible threats to platform integrity, the team improved safety and prevented damage to the facility and the marine environment. The platform life and usability were ultimately enhanced as a result of the fully updated SACS model, which can be easily referenced for future operations and maintenance.

Anne-Marie Walters is a chartered chemical engineer who joined Bentley in 2004 as a global marketing director. She is responsible for promoting the company’s solutions and products that address the needs of the process, power, and enterprise arena. She represents the company on the board of the Construction Industry Institute and is also heavily engaged in the activities of FIATECH.