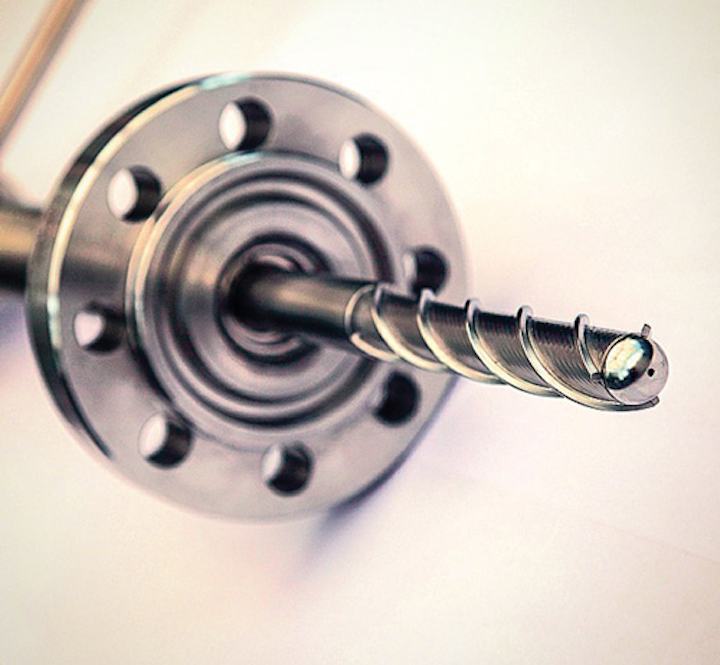 The VE Technology features helical strakes in the body of its probes, using a design that eliminates vortex-induced vibration. The test, carried out on May 1, 2017, by a North American independent metering research facility, proved the effects of vortex-induced vibration on traditional and helical probe geometries in a typical high-pressure, high-velocity pipeline environment.

The two thermowells were monitored at a series of flow rates corresponding to velocities from 6 to 110 ft/second. The results demonstrated that the ASME thermowell vibrated at all velocities, creating a cyclic strain at the flange joint with clear visual in-line and transverse displacement (up to +/- 0.5 in.) at certain velocities corresponding to its natural frequency. The helical strake thermowell had no visual vibration and a measured strain more than two orders of magnitude less than the ASME thermowell. Measured strain at the flange/shaft joint was from 100 to more than 250 times greater in the ASME thermowell. Displacement at the tip was thousandths of an inch for the VE thermowell versus 0.5 in. for the ASME.

The test was attended by Orbital personnel and representatives from some of the largest natural gas operators and transporters in the world – representing potential and current customers for this new technology.

CUI Global President CEO William Clough said: “This testing was commissioned to validate thousands of hours of research and operational service over the past 12 years by tracking data and performance in a real-time, real-world, controlled setting. The independently validated results prove that Orbital’s patented VE Technology, with its helical design, is an innovative and effective solution to many of the common issues encountered by traditional sample probes and thermowells, while demonstrating that VE Technology obviates the need for calculations and replacement probes/thermowells.”

For a full copy of the report, please visithttp://orbitalgas.com/wp-content/uploads/2017/06/OrbitalThermowellTestReport.pdf.