The Bureau of Ocean Energy Management (BOEM) has reported that Lease Sale 249 garnered $121,143,055 in high bids for 90 tracts covering 508,096.16 acres in the Gulf of Mexico's Western, Central and Eastern planning areas. 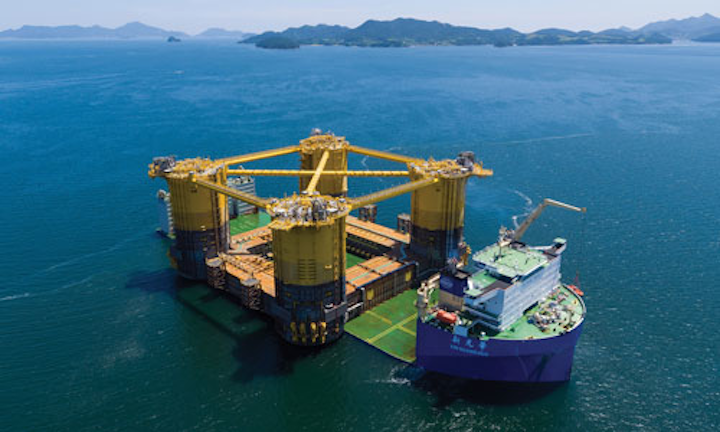 The Bureau of Ocean Energy Management (BOEM) has reported that Lease Sale 249 garnered $121,143,055 in high bids for 90 tracts covering 508,096.16 acres in the Gulf of Mexico’s Western, Central and Eastern planning areas.

William Turner, senior research analyst at Wood Mackenzie, pointed out that 76 of the 90 blocks receiving bids were in deepwater (400+ m or 1,312 ft depth).

Shell says it has achieved a key milestone in the development of its Appomattox project, which is slated to produce first oil from the deepwater Gulf of Mexico by the end of the decade.

The company says that the hull for the Appomattox platform is en route from Geoje, South Korea, to Ingleside, Texas, where the topsides will be added and construction completed. With the recent completion and sail away of the hull, Shell says that fabrication is more than 60% complete and on schedule.

Six Crowley vessels worked alongside other third-party assets to deliver the platform, tendons, and other equipment from the Kiewit facility in Ingleside, Texas, to the Stampede field 115 mi (185 km) south of Fourchon, Louisiana, in Green Canyon blocks 468, 511, and 512. The field lies in about 3,500 ft (1,067 m) of water.

In the first stage, Crowley’s ocean class tugboatOcean Wind and the 455-series barges 455-3, 455-5 and 455-7 worked with other contracted vessels to deliver many 300-ft (91.4-m) sections of nine 3,400-ft (1,036-m) tendons that would secure the TLP to the seabed. From there, the company’s Ocean Sun and Ocean Sky, along with several third-party tugs, towed the TLP through the Ingleside Channel to offshore waters. After a scheduled brief stop at a holding location, the convoy of vessels began the second stage of the tow in offshore waters.

The company positioned the tugs in a stationary star pattern and used their tow wires to hold the platform steady in the middle. After Hess and its installation contractor, Heerema, completed installation and the platform was made storm safe.

Hess says that hook-up activities have begun, one well has been drilled and completed, and completion operations are under way on the second and third wells. First production is expected in the first half of 2018.

To perform their vital functions in harsh and remote applications, fire and gas safety systems should be designed to perform despite offshore conditions.
Jan 21st, 2020