Virtually all deepwater field developments depend upon pipelines. 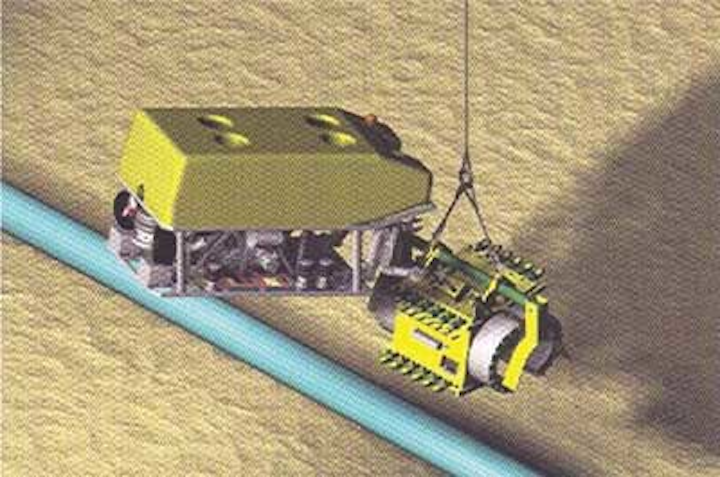 Virtually all deepwater field developments depend upon pipelines. Failure of a pipeline due to corrosion, defect, or an external event can lead to loss of production and, in the worst case, pollution.

Pipelines can fail for a variety of reasons, and the type and extent of damage and water depth in which this occurs will define the manner in which the repair can be handled.

Isolated pipeline damage is characterized by a small hole or crack and is most often a result of localized corrosion; a defect in a pipeline weld that went undetected during installation; a metallurgical defect; or impact from a dropped item. In general, a clamp that firmly encapsulates the pipeline and provides a reliable seal around the damaged area should be adequate for the repair.

Extensive pipeline damage can result from an unfortunate incident during pipelay operations or an event during the life of a field – for instance dragging of anchors, mudslides, upheaval buckling, or pipe walking. In most cases, the pipeline cannot be lifted back to the surface, and the damaged pipeline section has to be removed and replaced subsea with an "on bottom" repair spool piece.

Localized pipeline corrosion can be repaired by installing a high-integrity pressure vessel around the pipe at the damaged location. Typically this is accomplished using a Grip and Seal split-sleeve type clamp whereby two clamp halves are joined together by studs and nuts. These clamps incorporate tension bowls and slips that grip the pipe at both ends of the clamp, transferring the thrust loads through the clamp body. The slips ensure a smooth circumferential distributed load on the pipeline.

Longitudinal face seals and circumferential seals (typically made from purpose-built elastomeric materials) are energized by the studs to ensure a perfect seal around the damaged area. In shallow waters, over 3,000 split sleeve clamps have been installed worldwide, in diameters ranging from 3-48 in. (7.6 cm--1.2 m), and pressure ratings from ANSI 600 to API 10,000. Several of these clamps have been in service for over 25 years.

To repair pipelines in deepwater, ROV-installable and operable versions of split-sleeve type clamps have been developed. Alignment saddles are normally incorporated for landing and positioning of the clamp on the pipeline. The design of the body bolts allows for tightening by a standard work-class ROV using a low torque or impact-type wrench, or integrated hydraulic stud tensioners. Following activation by the ROV of the hydraulic pressure, the connector mechanically locks so that hydraulic pressure does not have to be maintained. Standard diverless Grip and Seal type split-sleeve clamps have been manufactured for pipe sizes from 8-44 in. (20.3 cm--1.12 m) OD and ratings of ANSI 900 to 2500, and have been installed in water depths up to 7,000 ft (2,133 m).

When a pipeline is damaged severely and or deformed over a certain length, the affected section must be removed and replaced. If the pipeline cannot be lifted back to the surface, an "on bottom" pipeline repair has to be performed. A spool piece repair (pipe replacement) necessitates cutting of the pipeline in order to remove the damaged section, with the replacement section connected to the pipeline on the seafloor. While hyperbaric welding can be used to connect the spool piece directly to the pipe in shallow water within the range of diver operations, this technique can be extremely costly.

Where it is economically viable to use divers, a bolted flanged connection method is generally employed. After the damaged pipeline section has been cut and removed, a standard flange is attached to each pipeline end in order to connect the repair spool piece to the pipeline. For a permanent connection, Grip and Seal connectors are most often used to structurally attach to and seal against the outside of the existing pipe. Wedge-shaped slip segments, positioned radially inside the body of the connector, are most commonly applied to attach the connector to the pipeline and are often self energizing; the higher the tension or compression force, the tighter the grip on the pipeline.

The sealing system generally consists of one or two stacks of circumferential elastomeric packers. When axially compressed by the bolts, the elastomeric packer flows radially inward against the pipe OD and outwardly against the connector body. To facilitate subsea installation, end-gap adjustments (up to one pipe diameter) can be incorporated in connectors. This provides flexibility in positioning of the repair spool piece prior to fixing the connector on the pipeline.

Deepwater pipelines are now routinely tied in and connected subsea using ROVs and remotely operated pipeline connection systems. Diverless mechanical pipeline connectors are most frequently used to tie in new spool pieces. The mechanical connector system comprises a male hub connection structure on which the female hub connector assembly is connected. For a deepwater on-bottom repair, where the damaged pipeline section has to be cut and removed, the challenge is to attach a male hub connection structure to each pipeline end in order to install and connect the repair spool piece subsea.

Following a survey of the damaged section of the pipeline, the pipeline is raised using the diverless pipe lift frames, after which the damaged section is cut out and removed. The diverless Grip and Seal connector with the male hub connection structure is deployed using a temporary installation (gantry) frame and fitted on a support frame. The support base plate provides stability and is equipped with mud mats to allow for soft seabed conditions.

Various iterations of the systems described above have been designed and fabricated for operators in the Gulf of Mexico. All the systems went through various phases of testing prior to acceptance by the clients and stored onshore, ready for use when required. Following damage caused by the Katrina and Rita hurricanes, systems were deployed for repairs of Shell's Mars and Entreprise's Typhoon pipelines.

Further design advances led to the development of a second generation system ideally suited to situations where the repair spool piece is relatively short, and where the seabed is sufficiently flat. More importantly, the amount of steel work left on the seabed after the repair is greatly reduced.

The most effective and economical method of adapting deepwater pipelines to allow for future subsea tie-ins involves use of "midline tie-in sleds" – modular units that consist of flowline piping; a connection structure for a future diverless pipeline connection; a block valve to isolate the future tie-in line; a piggable Y fitting to combine the trunkline with the future tie-in line; and mud mats.

The sled is welded into the pipeline like an ordinary joint of pipe and is designed to be easily installed via S-lay or J-lay. In a later stage, the new pipeline is installed close to the existing pipeline and the new tie-in is performed using a jumper, fitted with standard diverless pipeline connectors, and connected to the midline tie-in sled at one end on the existing pipeline and the pipeline end termination (PLET) of the new line.

A pipeline network is generally designed upfront with midline tie-in sleds built in to the pipeline system and installed during the pipelay operations, to facilitate connection of future pipelines into the existing pipeline network. However, during the Mars pipeline repairs, Shell took the opportunity to fit out the repair spoolpiece with a future tie-in hub. The same applies for the Typhoon repair where a future tie-in point was incorporated in the repair connection structure.

Shell's Perdido field is in the Alaminos Canyon block 857 in the Gulf of Mexico, in 7,800 ft (2,377 m) of water. The field is in an area with little export infrastructure: to install an export line all the way to shore would be extremely costly and a major challenge due to the difficult seabed conditions. The closest existing offtake system was the ExxonMobil Hoover Offshore Oil Pipeline System (HOOPs). Shell obtained approval from ExxonMobil to tie the Perdido export pipeline into HOOPS, even though there was no connection link available in the HOOPS line, and any pipeline shut down would have to be kept to a minimum. But based on its experience with the Mars on-bottom diverless pipeline repairs, Shell decided, as an industry "first," to use the same pipeline repair principle for the Perdido tie-in.

A pipeline connection hub is now available for the future Perdido export line tie-in. The system went through various rigorous onshore SITs and shallow water tests which resulted in a successful subsea installation, in 4,500 ft (1,372 m) water depth, using multiple ROVs, with the shutdown of the HOOPS pipeline limited to 17 days. The Perdido export line was subsequently connected to the connection hub on the HOOPS pipeline tie-in assembly.