Presently, the deepwater realm continues to garner global attention, as illustrated by wells located in the Gulf of Mexico’s Lower Tertiary play, and off the western coast of Australia. 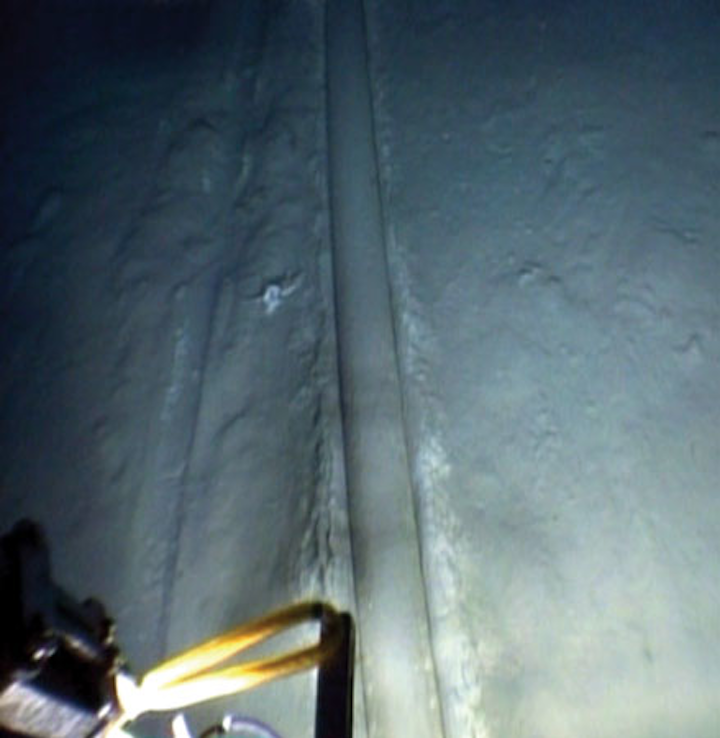 Presently, the deepwater realm continues to garner global attention, as illustrated by wells located in the Gulf of Mexico’s Lower Tertiary play, and off the western coast of Australia. And in this realm, subsea production schemes are inseparably linked with the risk of hydrate blockages. Should a blockage occur in an export line that ties in to multiple wells, it can lead to a field being entirely shut-in.

Composition wise, hydrates are crystalline molecular complexes that arise when gas and water molecules comingle in a high pressure and low-temperature setting. Moreover, in deepwater, the hydrostatic pressure increases with the water depth of a well; and depth also causes the ambient temperature to decrease. When this is coupled with a pipeline that is exporting gas with traces of water in such depths, it creates an ideal environment for blocked export line(s).

Thus, when complete loss of production occurs, an operator will initiate the crucial process of quantifying and locating a hydrate by employing subsea or topsides methods/techniques, or a combination of the two. This article, however, will focus on the subsea approach; composed of mobilizing an ROV—with fit for purpose equipment—from a multi-service vessel (MSV).

Zeroing in on the affected area(s) where pressure anomalies are present is key when quantifying a blockage’s location. Sequentially speaking, quantification is the first and highly crucial step required prior to attempting to remove/remediate a blockage. It should be noted that there are different schools of thought on whether to locate hydrates via internal or external means; the former method is highlighted here.

An ROV’s mobility allows it to traverse through a production scheme with relative ease. This enables them to conduct/acquire multiple pressure logs from hot stab ports accessible on pipelines. The acquisition of such logs is accomplished via pressure instrumentation installed on an ROV, permitting an operator to interpret a pipeline’s internals. This helps the operator to not only detect where pressure anomalies exist, but also compare differences in pressure throughout a subsea infrastructure. The greater number of ports that can be accessed, the better the chances for quantifying hydrate locations. This enables the operator to gain a better understanding of the most optimal section of the production scheme to focus on when planning a remediation program. Moreover, the use of pressure instrumentation also allows an operator to capture and compare pressure readings that are seen by a topsides facility, and provide “back up” readings should said facility lose communication with transducers on a subsea infrastructure.

Prior to an ROV carrying out any localization operations, it must first be equipped with the proper hot stab(s) to access hot stabs ports on a production scheme. Additionally, the appropriate hoses/conduits must be selected, to enable the ROV’s pressure instrumentation (analogue gauges, or transducers with digital displays) to take pipeline readings.

Furthermore, an ROV must also be outfitted with auxiliary ROV equipment and tooling. It is important to note that the aforementioned equipment must be properly configured so as to communicate with a hydrate without compounding it, as illustrated by overpressurizing a pipeline via an ROV’s auxiliary pump.

It is vitally important to properly outfit and equip the ROV for these purposes. Failure to do so can severely limit the effectiveness of quantification operations. The first item to be discussed is hot stabs. Identifying the proper stab to be used on a subsea scheme is of the utmost importance.

This is due to the fact that in a production scheme, a 17H hot stab—as referenced by the American Petroleum Institute (API)—is needed to engage the corresponding receptacles on a production scheme. The precise specification is vitally important. For example, should an ROV be equipped with a 17D (not a 17H) stab, engagement will be impossible. This would force an operator to source the appropriate stab from land or from an adjacent vessel, resulting in downtime.

Further, it is not uncommon for schemes to have one off stabs that are not API defined. In this backdrop, sourcing such stabs is complicated by the fact that they are non-standardized, and are typically manufactured by a single company. For this reason, analyzing a production scheme’s most up to date schematics/drawing is paramount.

Hoses are the next most important component, since they are instrumental in establishing a path of continuity between an ROV and a pipeline access point. Methanol is at times introduced into a pipeline from the platform in an effort to disassociate a hydrate, as methanol has been observed to have greater effectiveness over glycol, once a hydrate has formed. Because of this, the hose must be able to handle methanol. The hose must also be able to withstand the array of contents present in a pipeline, and not lose integrity. If breaching occurs once full communication with a pipeline is established, it can cause a pipeline’s internals to expel, especially if the pipeline’s pressure is above ambient pressure. Conversely, if the pipeline’s pressure is below ambient pressure, this can cause sea water ingress, compounding a pipeline’s hydrates.

Additionally, the hose must be properly pressure rated to ensure that it can withstand several stresses. These include the pipeline’s pressure once a path of continuity is established, and also the pressure introduced by an ROV’s auxiliary pump—and consequent fluctuations—during pressure equalization maneuvers that are executed before engaging a pipeline.

Equalizing the pressure at a pipeline’s access point is highly critical. It is achieved by tactfully pumping methanol, for example—at the hose end—via said pump(s) mounted on an ROV. In addition, the reciprocating pump will require a valve manifold plumbed directly to it, so as to switch the input and output arrangement, from a source standpoint, as follows:

ROV as source. In this backdrop, the pump draws methanol from the bladders (input), while pumping outward toward a pipeline (output). The intent here is to not deplete the methanol as this will rupture the collapsible bladders. Both bladders operate independent of each other.

Pipeline as source. Here the manifold is manipulated so as to pull vacuum on the pipeline end (input) while pumping outwardly into bladders mounted on an ROV (output). It is critical that bladders are not over-filled/pressurized.

The encaged bladders that are attached/mounted on an ROV must be used tactfully during quantification operations due to their volume limitations. Further, due to a bladder’s volume constraints, the amount of pumping, as well as the intake of a pipeline’s content is limited (depleting the bladder’s volume can lead to their complete rupture/collapse).

Through all the above actions, one must be sure to safely operate the subsea valves which serve as the gateway for pipeline communication. Prior to such manipulation taking place, it is critical to analyze a production scheme’s drawings to ensure that the proper ROV tooling is sourced. This is especially true when the valve is not designed to be operated by an ROV’s manipulator, but instead requires a class 1-4 torque tool. 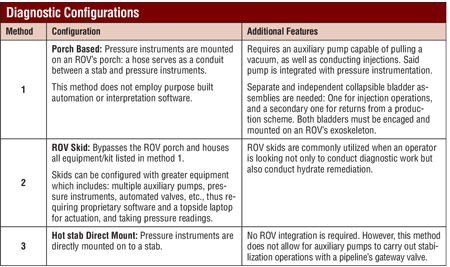 Once the means of engagement—manipulator or tooling actuation—is defined, it is necessary to bring pressure equalization to the forefront as well as methodical valve manipulation. To accomplish this, the reciprocating pump’s rate will need to be methodically controlled prior to opening the gateway valve on a pipeline or asset.

Next, the gateway valve will need to be carefully opened to allow minor communication to take place between the ROV-mounted equipment and the pipeline, prior to the valve being fully opened. Fine tuning the pump’s output, while meticulously manipulating the subsea valve and observing the pressure instruments, is key to avoiding damage to the ROV equipment via hydraulic shock.

Conversely, a non-hermitically instrument referencing 0 psi (gauge) will not function if the pressure within a pipeline is below hydrostatic pressure, as its function is based on referencing ambient pressure. Consequently, if ambient pressure registers at 3,500 psi, and the pipeline is at 400 psi, a non-absolute gauge will not be able to detect the pipeline’s pressure.

Once the pipeline’s pressure readings have been obtained and logged, it is imperative to methodically close the valve of interest. After this has been completed, the hose linked to the hot stab must be cleared of any of the pipeline’s content that may have comingled with the previously pumped methanol, to avert the pipeline’s residual content from expelling into the sea when the stab is disconnected.

To prevent such expelling, a vacuum must be pulled—very cautiously—with the auxiliary pump, in order to route the residual content to the appropriate bladder. In this setting, the hose must be non-collapsible to ensure that it is not crimped or crushed by the ambient pressure when a vacuum is applied. Here too, the bladder must be designed to handle all the content introduced into it, to prevent it from being breached.

As offshore projects continue to favor deepwater, this will require maintaining a “right tool for the right job” philosophy to ensure that quantification and localization operations are carried out in a manner that does not compound existing hydrates. Moreover, referencing the methods and field-proven techniques described herein will provide a significant advantage in ensuring that interfacing with an anomalous pipeline can be conducted safely, so as to bring a non-producing wells back online. •

Fernando Hernandez is the subsea technical advisor at Reaching Ultra, a Houston-based market research firm. He has extensive field experience in the dynamic positioning, ROV tooling, automated controls, subsea and well Intervention sectors. Hernandez’s offshore background has given him a firm understanding of the best practices for outfitting vessels and rigs for offshore operations, so as to properly have topside and subsea equipment operate in synchronicity via divers and ROVs. His field experience and tri-lingual fluency has facilitated the execution of several offshore operations, as well as the development of a number of international commercial relationships.