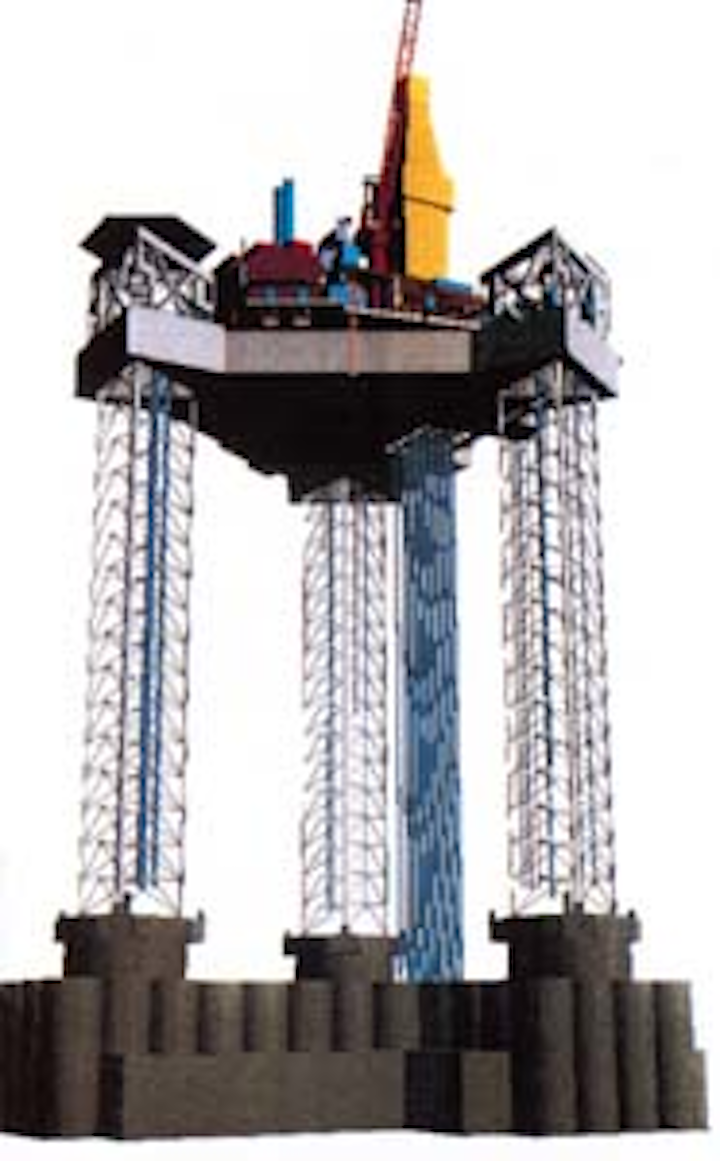 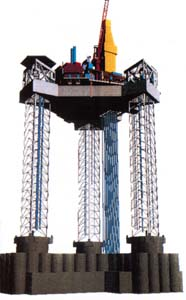 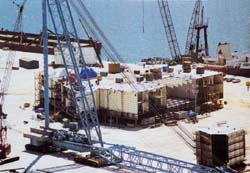 Late this year, first oil is due from BP's UK Harding Field. The project is characterized by a new method of production for the North Sea, a large jack-up platform known as the TPG500 which was conceived by Technip-Geoproduction (TGP).

Harding was discovered in January 1988 by Britoil, and is currently owned by BP (70%), Repsol (25%) and Ranger (5%). The field lies in UK block 9/23b, 320km northeast of Aberdeen, with known reserves contained in a series of pools within the main reservoir.

Production will initially focus on the 185MM bbl of oil and 200bcf of gas located in the Central and South accumulations, but later on, smaller reserves in the North and Northeast parts may be exploited. There are also further quantities in stratigraphically deeper and more complex reservoirs in the Southeast and Deep South pools.

A single TPG500 platform will be installed between the Central and South pools. Horizontal drilling will be employed to achieve step-outs to, and completion of, the wells within the shallow depth of the Harding reservoirs. Sixteen wells will be drilled from the platform's supporting gravity base tank (GBT): eight production wells, one gas cap well, four water injectors and two aquifer wells to supply this injection water.

The platform has been designed to process and export 64,000 b/d of oil and to handle gross reservoir fluids through the separation train of up to 146,000 b/d. Associated gas will power the platform's gas turbine generators, with excess gas reinjected into the central reservoir and stored there for use later as fuel.

Onboard the TPG500 will be the drilling rig, process equipment for crude stabilization and living quarters for the crew. The platform is designed as a floating vessel, and offshore costs will be minimized by floating the complete installation from its inshore location to the field.

Hyundai is currently completing construction of the 23,000 ton platform's basic hull unit, topside production and drilling facilities in South Korea. The hull is a triangular, three-level truss structure measuring 102 meters wide, 88 m long and 9 m high, with a flat spud footing. Legs are located at each corner of the hull.

In July and August, Dockwise's self-propelled heavy lift vessel Transshelf is due to transport the TPG500 18,000km to the Harding Field site, via the Gulf of Suez, a journey expected to take 54 days under reasonable weather conditions.

As the platform is being built on a construction quay rather than inside a dry dock, loading will be effected by a skid-on method via the side of the vessel, with four transverse skid ways on the vessel's deck connected to the skid ways on the quay. Using a skid-shoe and pulling system, resultant elevation of the TPG500 above the deck will be 2.60 meters.

Overhang of the hull during transportation will be 31m on each side of the vessel. As it nears the Harding site, the platform will be discharged using the float-off method with all seafastenings removed before the vessel ballasts down, submerging its own deck, to deliver the platform in a floating condition.

Prior to the arrival, the 85,000t concrete GBT will already have been lowered onto the seabed. The GBT, built at the Costain-Taylor Woodrow yard in Scotland, is due to be towed to the field this month and installed there in a water depth of 109 meters. As well as supporting the platform, it will serve as a storage tank for the field with capacity for 500,000bbl of crude.

When the platform arrives, its three legs will be individually lowered onto three circular towers, each 19m in diameter and extending 15m above the roof of the GBT. The legs will engage onto docking piles and will be latched onto the towers before the platform deck is raised some 21m above sea level. Then offshore hook-up and commissioning will be completed in tandem with early drilling operations, with first oil expected in December.

The metallurgical content of Harding's heavy, acidic crude restricts the volumes that can be accepted at the receiving refinery. Primary oil will be exported from the platform via a 24in. diameter pipeline extending 2km from the base to connect with a flexible riser and a new submerged turret loading system operated by Statoil, which allows tankers at Harding to operate in wave heights up to 10 meters. Three dedicated shuttle tankers will take the crude to suitable refineries in continental Europe.

For this project, Technip-Geoproduction worked with BP and McDermott Engineering Europe on a front-end engineering program to demonstrate the viability of the TPG500 concept for Harding. Selecting it as the central production facility for the field brought numerous advantages, including a large capacity deck for production equipment, with installation independent of heavy lift barges and with minimum offshore hook-up requirements.

TPG-McDermott had responsibility for detailed engineering and procurement services for the platform, comprising overall production facilities, structural, jacking and locking systems and safety studies. This included detailed contributions to the Safety Case to the UK's Health & Safety Executive, allowing the installation to operate for 35 years as a permanent drilling, production and quarters platform.

As with other current BP projects, Harding embraced fully the principles of partnering, drawing together an integrated project team of 15 companies. The procurement strategy, led by TPG-McDermott, was also based on partnering principles. Suppliers were asked to submit tenders for equipment against simplified functional specification requirements. Gains resulting to both project team and suppliers were reduced cost, delivery time and documentation.

Another example of beneficial partnering was the agreement between BP/TPG-McDermott and Hyundai to transfer responsibility for finalizing certain fabrication design details from the engineering office to the yard in Korea. This agreement was carefully formulated prior to start of fabrication, with Hyundai representatives working in Paris to familiarize themselves with the design package.

The tripartite consortium also gained a closer understanding of Hyundai's needs, leading to engineering deliverables being compiled to complement the fabricator's working methods.

The project will probably be completed within the tight schedule, and engineering equipment procured within the planned budget. According to Technip-Geoproduction CEO Pierre Dupal: "Within the alliance, we learned the benefits of working in an atmosphere of mutual trust; reducing specifications; and being an integrated team in front-end engineering. And it worked - the project turned out cheaper than expected."

The TPG500 was what made Harding possible, he claims. "The big advantage this unit has is its sizeable reduction in investment costs. Previously, BP had been looking for years for an economic solution for this field." BP has other projects upcoming, Dupal adds, which might justify further use of this production concept.