Over the past year, the platform supply vessel (PSV) market in the US Gulf of Mexico has experienced great times. 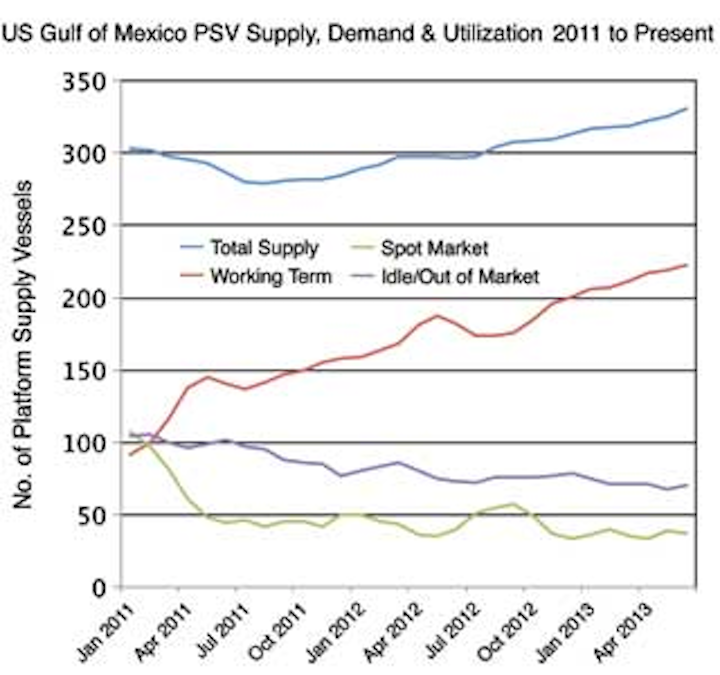 Over the past year, the platform supply vessel (PSV) market in the US Gulf of Mexico has experienced great times. Vessel owners have seen utilization remain high for PSVs of all sizes, and day rates in the US Gulf are trending upward, even as the supply of PSVs grows due to new deliveries or vessels returning from other markets.

PSVs are used for a variety of jobs in the oilfield sector, providing support and supply work at various stages, from seismic surveys to exploration to construction to production to decommissioning. However, the major demand driver for PSVs in the US Gulf is drilling support, and drilling in the US Gulf is more and more a deepwater activity.

As rigs have moved into deeper waters, the PSVs required to support them have become larger, with bigger cargo capacities and newer technologies for station-keeping and propulsion. While 10 years ago a 220-ft (67-m) PSV would have been the top of the line, operators now look for PSVs that can be more than 300 ft (91 m) in length. High deadweight tonnages, deck cargo, dry bulk, and liquid mud capacities are needed to handle the large amount of supplies needed for a deepwater drilling campaign. Additionally, a dynamic positioning system for maintaining position has become necessary, with a strong preference for DP-2 systems that have inbuilt redundancy.

The movement toward deepwater has created a two-tier vessel market. Older vessels, which tend to be 200 ft (61 m) or smaller and may lack dynamic positioning systems, are now mainly employed on the shelf of the US Gulf, supporting drilling or workover activities, minor supply jobs, and production support at offshore facilities in shallow waters. Newer, bigger vessels with high deadweight tonnages and liquid mud capacities take the deepwater jobs, which promise much higher day rates. Large, DP-2 PSVs can command day rates in the mid-$40,000s, while a 180-ft (55-m) PSV with no dynamic positioning would earn in the $3,500 to $8,000 range.

Market conditions are strong enough at this time that PSVs of all types are in high demand, though the greatest growth in day rates and utilization is for larger vessels. As older PSVs outlive their usefulness in the US Gulf oilfield market, they may often be sold to vessel companies operating in regions such as West Africa or Central America, with some finding a new life in cargo transportation, fishing, or dive support roles.

The Jones Act requires goods transported between US ports to be carried by US-flagged vessels built at domestic shipyards. To satisfy demand and Jones Act requirements, the US Gulf is going through a building boom cycle, with more than 60 PSVs currently under construction at various yards and newbuild options for more available. Vessels currently under construction range in length from 190 ft to 320 ft (58 m to 98 m), with most boasting large liquid mud capacities, dynamic positioning, and deadweight tonnages of more than 6,000. More than 50 new US-flagged PSVs have been delivered to owners over the past three years.

Hornbeck Offshore Services announced a major newbuild program in late 2011, which has grown to 20 PSVs and four MPSVs. Since then, other companies, including Edison Chouest Offshore, Tidewater, GulfMark Offshore, and Harvey Gulf International Marine, have added to their own newbuild programs.

The burgeoning market has also seen the entry of some new players in the deepwater sector via newbuild activity. Bordelon Marine and Jackson Offshore Operators both announced newbuild programs of three and four PSVs, respectively. Previously, the two companies focused on smaller fast supply or mini supply vessels, but will enter the deepwater market upon delivery of recent orders.

A recent decision by Hornbeck may indicate that the current wave of newbuild orders has crested. Hornbeck decided to let further shipyard options for 310 and 320 Class PSVs expire. Hornbeck Chairman, President and CEO Todd Hornbeck stated that one of the main reasons the company let its options go was that they see the market being "fully built out" and that announcements of newbuilds by Edison Chouest Offshore and other competitors effectively filled the order book and satisfied expected demand in the domestic PSV market.

Harvey Gulf International Marine has been the major purchaser of PSVs in the US Gulf in recent years. In 2012, Harvey Gulf purchased nine PSVs from Bollinger Shipyards affiliate Bee Mar. In May 2013, Harvey Gulf acquired a number of vessels from Gulf Offshore Logistics, including six PSVs.

This summer, Aries Marine sold a 185-ft (56-m) PSV that had been cold stacked for around three years. At the beginning of the year, Aries Marine sold a 166-ft (51-m) PSV and 185-ft PSV, both of which had also been stacked for an extended period. In both cases, the non-DP vessels went to buyers outside the US Gulf and are no longer being used for traditional oilfield supply work.

Hornbeck Offshore Services has begun selling its 220 Class PSVs, with two of the 220-ft vessels sold to smaller independent vessel companies. Four more vessels remain to be sold. Hornbeck said the vessels, which were built between 1997 and 2000, do not fit the company's strategy of focusing on larger, high-specification vessels. However, in contrast with the Aries Marine vessels, the two 220 Class PSVs that were sold still work in the US Gulf. The vessels have gone from the lower end of Hornbeck's fleet to the largest PSVs a smaller company owns, and are currently working shelf jobs.

With larger PSVs commanding the highest day rates and experiencing the strongest demand in the US Gulf, many vessel owners have taken the opportunity to upgrade some of their smaller or slightly older PSVs to be more competitive. These upgrades can be as simple as improving a vessel's dynamic positioning system, but can also involve major work such as lengthening the vessel and increasing liquid mud and deck cargo capacities.

Upgrading an existing vessel is faster and less expensive than ordering an entirely new PSV, so upgrade programs allow owners to meet demand for high-spec units in a more timely fashion and to make their vessels more suitable for deepwater work. Vessel owners with newly upgraded PSVs in US waters report increased day rates and longer charters for their PSVs, compared to those earned before the improvements. Though an upgrade can take a PSV out of the market for several months and has its own associated costs, the investment has proven worthwhile for many owners.

GulfMark Offshore completed the first phase of its stretch program this year, which involved six PSVs being taken from 190 ft to 225 ft (58 m to 69 m), with liquid mud capacity increases of around 2,000 bbl. During 2Q 2013, GulfMark started a new stretch program which will take PSVs from 210 ft to 260 ft (64 m to 79 m). The first of 10 PSVs which could be stretched under this program is now in the yard. Looking ahead, GulfMark has said that four more 190-ft PSVs will become candidates for upgrade in 2015.

Hornbeck Offshore Services is well into its own 200 Class retrofit program, which was announced last year. Bollinger Shipyards is upgrading and stretching six Hornbeck PSVs, lengthening them from 200 ft to 240 ft, boosting deadweight tonnage by 600 metric tons, doubling liquid mud capacity to 8,000 bbl, and changing dynamic positioning from DP-1 to DP-2. Work on the first two of these vessels is complete, and all six vessels should be redelivered by the end of the year. Harvey Gulf International Marine has made plans to upgrade five of the PSVs acquired from Bee Mar in 2012. The 210-ft PSVs are to be lengthened to 270 ft (82 m), with liquid mud capacity increased from 6,300 bbl to around 10,000 bbl and deadweight tonnage going up by around 1,000 metric tons.

Following the Macondo blowout in April 2010, the subsequent drilling moratorium, and the following slow pace of well permitting in the US Gulf, many PSVs left the region to find work in Brazil, Mexico, West Africa, and other parts of the world. However, with US-flagged vessels now in high demand, a number of PSVs have returned to the region.

Since the beginning of 2013, eight US-flagged PSVs of more than 230 ft (70 m) have returned to US waters from multi-year charters overseas. PSVs owned by Harvey Gulf, Otto Candies, Tidewater, and Hornbeck have come back, with many of these vessels securing long-term contracts that begin soon after arrival.

Some vessel owners indicate more US-flagged PSVs could return to the US Gulf to capitalize on current demand, either at the end of current contracts or by being replaced on overseas jobs with a foreign-flagged vessel.