The weight of a rig is an important variable in cost estimation and determines the amount of steel required in construction. 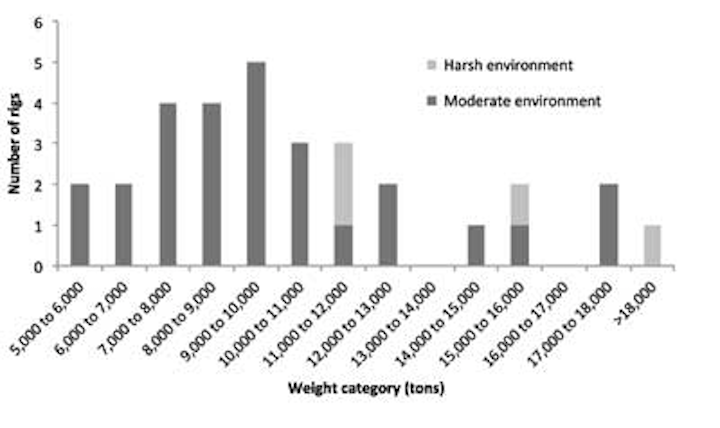 The weight of a rig is an important variable in cost estimation and determines the amount of steel required in construction. Rig weight is generally considered proprietary, however, because it indicates design benchmarks and construction performance metrics that are central to the competitive nature of the industry. Several methods can be used to predict ship weight, but given the structural differences between jackup rigs and ships, these techniques are not adequate to predict rig weight. The purpose of this article is to construct a jackup lightweight displacement function based on empirical analysis of a random sample of rigs.

Weight is an important design factor and a primary feature in determining the physical characteristics of a rig. Larger rigs have greater variable loads, can support more powerful drilling equipment, and operate in more severe conditions. Weight is linked to fabrication costs. As more steel is added, material costs and fabrication expenses increase, but complex tradeoffs are involved with weight management, and because so many interdependent factors are involved, it is difficult to quantify the effects of weight on cost. Weight is also a critical factor in determining rig stability and the size and design of spudcans.

The weight of a jackup rig is primarily determined by the water depth, drilling, and environmental capability, and rig design.

Water depth. As the water depth capability of a rig increases, the length of the legs increase. At some point, incremental leg length cannot be added to a given hull design and the hull must be enlarged. As a result, water depth is correlated with a number of physical descriptors including leg length, hull breadth, hull depth, deck area, and hull volume.

Rigs may employ rack chocks. Rack chocks are inserted after jacking to transfer the vertical load from the leg racks to the hull. Without rack chocks, the load is held by the pinions in the jacking system. The use of chocks increases the fixity between the hull and the legs, and allows for a reduction in the bracing in the legs to reduce leg weight. Most F&G, Baker Marine, Keppel, and Gusto MSC rigs utilize chocks, while most Letourneau rigs do not.

Information on rig weights is not widely available and is generally considered proprietary. We assembled data from 31 rigs representing 21 designs and three harsh environment units. Water depth, hull length, hull width, build year, and designer data were collected from the academic and trade literature, specification sheets, and industry personnel. The sample includes most of the rigs commonly built in shipyards, including the F&G L780 Mod II, the LeTourneau Super 116, the Baker Marine 375 and the Gusto CJ 70 X 150. In a few cases, lightweight displacements were estimated as the transit displacement minus the transit variable load to supplement the dataset. When more than one data point was available from a single rig design, the displacements were averaged to ensure that the data points were independent.

One key issue is the relationship between displacement and water depth. Water depth explains 57% of the variation in lightweight, but water depth squared turns out to be a slightly better predictor. In a regression analysis, the three harsh environment designs weigh more than average moderate environment rigs for the same water depth capability.

where D is lightship displacement (tons), WD is water depth capability (feet), and L and B are the length (feet) and breadth (feet) of the rig, respectively. Environmental class, designer and build year were not significant predictors.

Water depth is positively correlated with weight, and as water depth increases, the slope of the relationship increases because of the squared term. In reality, width and breadth are not constant with increasing water depth, but enter the model relative to their physical characteristics.

Small sample size reduces the confidence in the results and inflates model fit. However, because the total number of rig designs in the world is limited and our sample includes the most popular, the relations are expected to be reasonably robust. Additional predictor variables could be examined in re-specified models, but since the model already predicts over 90% of the variation in weight, the weight relation is considered adequate for aggregate assessments and gross benchmarking studies.

Additional error may be introduced because the lightweight displacement of some vessels was based on estimated values, and a number of different sources were utilized which may estimate lightweight displacement differently. When multiple records for a single rig design were available, the reported weights matched closely, and deficiencies in the weight reporting may be partly offset by the averaging of multiple records.

Editor's note: This article is the second of a five-part series by Mark Kaiser and Brian Snyder on rig construction costs, weight specifications, and market day rates.