We have come a long, long way from the itinerant well "shooter" with his mule-drawn wagon full of nitroglycerine bottles. 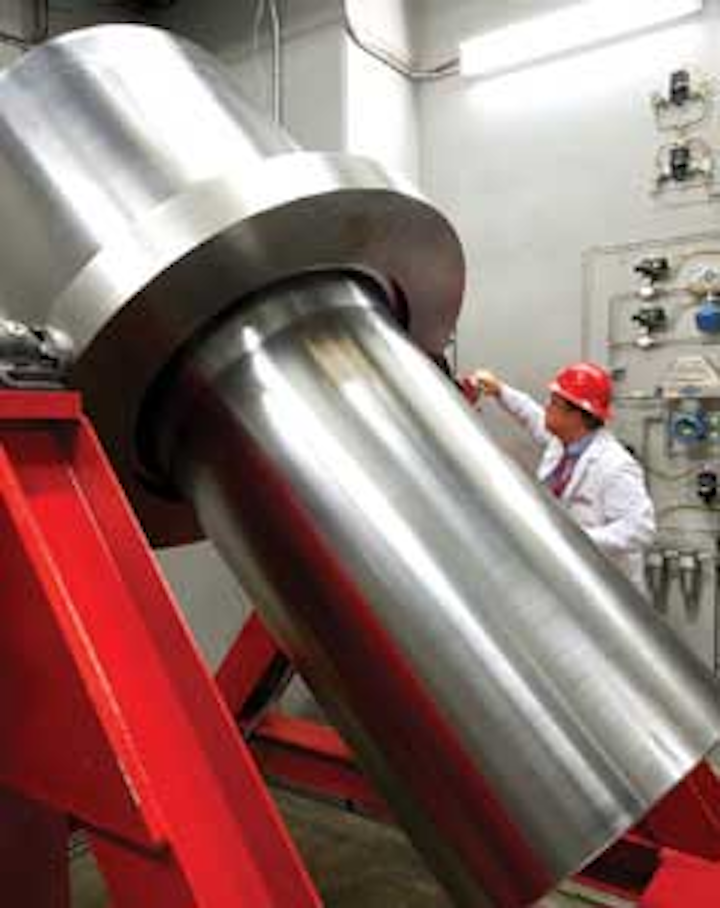 We have come a long, long way from the itinerant well "shooter" with his mule-drawn wagon full of nitroglycerine bottles. How far we have come is exemplified by Halliburton's new Advanced Perforation Flow Laboratory at the company's Jet Research Center south of Fort Worth, Texas.

Convinced that improved technology could provide better understanding of the downhole performance of perforating systems, Halliburton has made a considerable investment in this state-of-the-art facility. By replicating actual downhole conditions under which perforating guns are fired, actual results can be predicted. This allows company scientists to design optimum charges for specific situations that deliver uniform, debris-free perforation tunnels that produce maximum performance, whether the objective is production, injection, or stimulation.

In the past, many perforators were judged by surface parameters measured in concrete targets and shot under ambient conditions. The two parameters most often touted were penetration depth and entry hole diameter. These satisfied those people who believe that "a hole is a hole," and any hole in the casing will do. But there is a huge difference between surface data and downhole data. Moreover, Halliburton engineers knew that its customers were not simply paying for holes, but wanted holes that delivered optimum flow performance.

The only way to prove the performance of different perforating charges and gun systems is to test them under realistic downhole conditions. Accordingly, the new facility has advanced flow vessels that can get as close as possible to real-world conditions. Three behemoth test vessels were built: A 50,000-psi vessel, a 25,000-psi vessel, and a 25,000-psi high-temperature vessel.

Most importantly, all vessels are equipped with flow loops so targets can be tested for flow efficiency in either direction—production or injection/stimulation. Before they are perforated in the test vessels, target cores can be saturated with oil, water, or any combination of the two to simulate specific saturation fractions. For injection or stimulation wells, the actual injection fluid can be replicated to see how it will behave in specific situations.

Taking the analysis one step further, Halliburton not only tells its customers how the perforating charges and systems perform, it tells them why systems perform as they do. Using equipment perfected by the medical industry, company engineers use an in-house computerized tomography (CT) scanner to image the perforated target before it is cut open for analysis. In the past, linking physical parameters to results called for some assumptions. However, in today's world, making an incorrect assumption can cost an operator millions, if not billions, of dollars. The CT scan lets the engineers see microscopic details of skin effect, micro-fracturing patterns around the crushed zone, and the effects of different charges on a variety of representative rock targets.

Using precise measurements made on realistic rock targets and replicated fluids, assumptions are minimized, and customers are given the insight they need to identify the best perforating system for any given well condition.

A recent example occurred in the Caspian Sea where existing perforation and completion techniques were suspected of reducing well productivity. Halliburton developed and tested a special shaped charge that could maximize downhole perforator penetration in the specific targeted reservoir. The result was a 41% increase in clean perforation tunnels and a 34% increase in total penetration depth.

With solid performance data measurement capability and the ability to replicate actual formations and downhole conditions, Halliburton believes it can keep pace with the needs of the industry for many years to come.

The company announced at the SPE Annual Meeting held recently in San Antonio that it will donate $250,000 per year for four years to support three initiatives: SPE's Student Dues program, which enables students to participate as members free of charge; the Energy4Me program, which educates the public and students about energy and the upstream oil and gas industry, online and through training and teaching materials; and PetroWiki, SPE's knowledge-sharing wiki, which provides information about E&P industry engineering.

Mark Rubin, executive director of SPE, said: "As a not-for-profit organization, SPE counts on the generous support of companies like Chevron to offer valuable programs to our members and the industry."