Svenska Skum, a subsidiary of Tyco International, is a specialist in marine firefighting systems and has developed the HotFoam System to quickly extinguish fires in enclosed spaces. 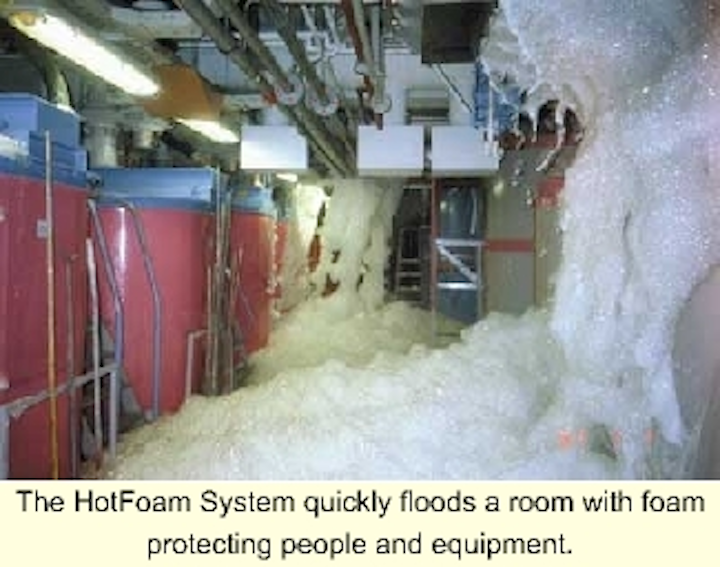 Svenska Skum, a subsidiary of Tyco International, is a specialist in marine firefighting systems and has developed the HotFoam System to quickly extinguish fires in enclosed spaces. The system uses a combination of high expansion foam concentrate, Meteor P+, salt or fresh water, specially designed foam generators and the inside air to make foam.

This new generation of high expansion foam technology provides the capability to create foam using the hot and smoke-filled combustion gases (or fresh air). Competing systems use either Halon or CO2 gas to extinguish a fire in an enclosed space. However, Halon is now banned in most countries due to its negative environmental effects. CO2 systems are effective, but have significant limitations.

There are several problems with CO2 systems. First, the gas is deadly to humans if they are trapped in a room with a fire. The time lost clearing people from the fire area before release of the CO2 places the vessel in danger, because the fire has more time to expand. Because of the way the HotFoam system is set to operate in an emergency situation, no time is needed to clear people from spaces prior to release of the foam.

Storage of CO2 onboard a vessel, especially for large volumes of the gas, requires large amounts of (heavy) pressure bottles and high pressure piping systems for delivery. Since space and weight are at a premium on all marine installations, this is a significant disadvantage for the CO2 system. HotFoam requires comparatively small amounts of space to store the foam concentrate because of the low concentration required (2%) which also results in low weight.

The system uses readily available water from the vessel's standard water supply without the need for special high pressure piping. Seawater may also be used directly, since salt water is as efficient for foam production in Hot Foam applications as fresh water.

A CO2 system can only be released once and can only be recharged when in port. This places the vessel in danger should more than one fire occur at a time or if a fire reoccurs. A release of foam can be stopped at any time and released again if needed. This provides extra flexibility in the event of a second fire or the re-ignition of an extinguished fire, even though this is unlikely when HotFoam is being used.

With a CO2 delivery system comes a complicated valve system with many moving parts. This can lead to system failure over time as parts age and in addition, the gas bottles must be checked and recertified at regular intervals. The design of the HotFoam system has no moving parts, and this simplicity leads to improved reliability and the probability that the system will function properly when needed.

Lastly, CO2 is considered by some authorities to be a greenhouse gas, use of which may be banned in the future. Foam is environmentally safe and people friendly.

When activated, the system initially produces a water fog to quickly cool the area affected by the fire. Following this, foam will totally flood the space and submerge the fire as well as exclude the air the fire needs to continue burning. Most importantly, the system is safe for people trapped in a fire-filled room. Svenska Skum has 100 HotFoam systems installed in vessels.