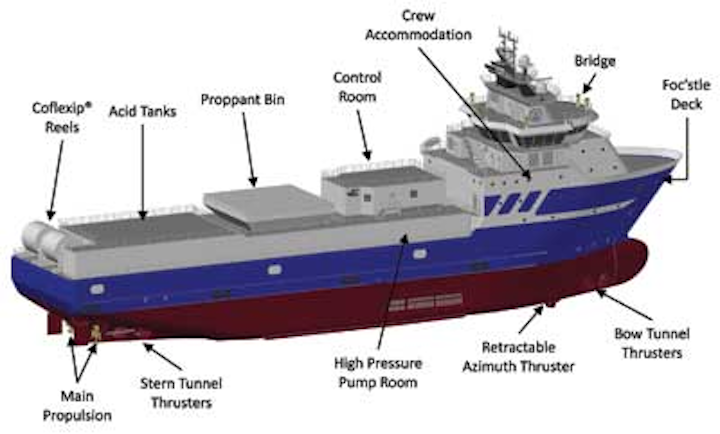 Today's preferred method ofoffshore vessel-based stimulation involves multi-zone treatments of horizontal wells – a technology first perfected in the North Sea. A vessel in today's market must perform large-volume, low-rate matrix acid treatments, high-rate Paccaloni-style matrix acid treatments, acid fracturing, and high-concentration proppant fracturing. Furthermore, a vessel must be able to perform treatments at a rate of at least 60 bbl/min. There is also a small but increasing demand for treatments in high-pressure/high-temperature (HP/HT) formations, requiring the entire vessel to be rated to 15,000 psi maximum working pressure. There has been a significant increase in demand for automation (to reduce both the number of offshore personnel and the incidence of human errors during treatments), real-time remote treatment data transmission (again, reducing the need for offshore personnel), increased storage capacity for all materials (to increase the number of stages treated between loadouts, rather than to increase the size of the stages themselves), increased requirements for environmental compliance, increased equipment reliability and redundancy, increasing demands for dynamic positioning and station-keeping capabilities, improved crew welfare, and stricter requirement for (and enforcement of) QA/QC and competence systems.

The North Sea is the only area in the oil and gas industry that requiresstimulation vessels to have both very large acid storage capacity and very large proppant storage capacity (although this is becoming increasingly important in both Brazilian and Angolan waters).

The primary North Sea stimulation treatment is a multi-zone horizontal completion. Most vessel-based operations are performed with a rig on site. If the rig is a jackup or a semisubmersible, then the rig time contributes the largest percentage of overall costs, so it makes economic sense to limit the waiting time spent on stimulation vessels returning to port for restocking. This has led to the use of ever-larger hulls. The first dedicated vessel mobilized to the North Sea was 249 ft (76 m) long and has a 3,424 metric tons (3,774 tons) dwt. The most recent vessel is 311 ft (95 m) long and has a 5,150 metric ton (5,677 ton) dwt – this increase in deadweight tonnage provides for a corresponding increase in both marine and stimulation capabilities.

Reducing or eliminating non-productive time (NPT) due to equipment failures is key to keeping within budget for offshore stimulation operations. Important elements have to be considered for low and ever-decreasing NPT. First is equipment design. The reliability of modern equipment far exceeds that of the previous generation, due to improved equipment design and materials, combined with 30 years of operational experience in one of the oil industry's harshest environments.

Second is a formal and rigidly enforced preventative maintenance (PM). The implementation and enforcement of QA systems is one significant change the industry has experienced over the last 30 years and a rigorous PM system is a major part of this process.

Fourth is station-keeping. The ability to stay on station alongside a rig or platform is a key part of reducing NPT.