Over the next five-year period, Douglas-Westwood forecasts global subsea vessel opex will total $52 billion. This represents a decline of 13% compared to the preceding five-year period. Despite these near-term concerns, subsea vessel demand is set to grow at a 2% compound annual growth rate over the 2017-2021 period. This will support vessel utilization and improve day rates in the medium term. 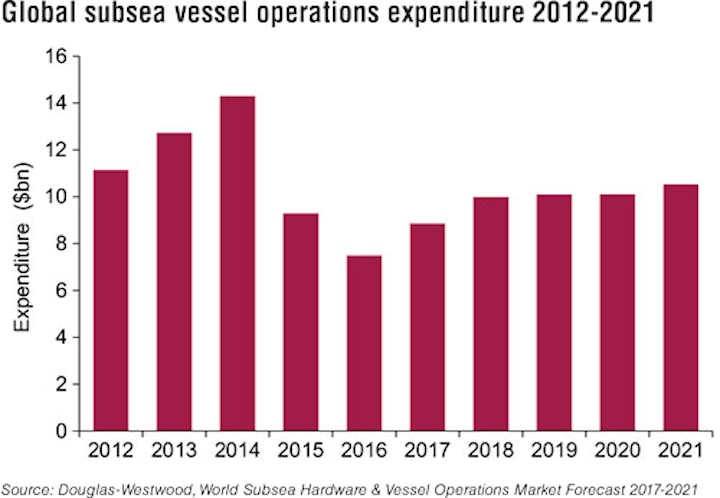 With budgets squeezed by two years of low oil prices, E&P companies worldwide have been forced to defer or cancel oil and gas projects. This has led to a tough time for subsea vessel operators and is a far cry from the 2010 to 2014 period, when a generous oil price led to substantial project sanctioning and record levels of expenditure. The result of this was a boom in vessel construction to address a suddenly undersupplied market. Now, with the effects of high oil prices long-gone, many vessel operators find themselves with high-value assets unable to find work - leading to bankruptcy for some. They have responded with the scraping or disposal of uncompetitive units, while also deferring or canceling the delivery of new units.

Over the next five-year period, Douglas-Westwood (DW) forecasts global subsea vessel opex will total $52 billion. This represents a decline of 13% compared to the preceding five-year period. Despite these near-term concerns, subsea vessel demand is set to grow at a 2% compound annual growth rate (CAGR) over the 2017-2021 period. This will support vessel utilization and improve day rates in the medium term.

Brazil, Southeast Asia, the US, and West Africa will account for 44% of global subsea vessel operations expenditure between 2017 and 2021. These individual countries and regions will remain vital to subsea vessel demand over the forecast period despite suppressed oil prices.

It is pertinent to state that much of the vessel activity in these areas will be based on the volume of existing wellstock driving well intervention expenditure. Additionally, a large installed base of infrastructure will support inspection, modification, and repair (IMR) activities, as well as mega-projects which were sanctioned before the oil price collapse. Furthermore, these countries and regions have large greenfield projects that have been re-engineered, with the potential of reaching final investment decision (FID) in the near term. Over the forecast period, subsea vessel demand days will also be supported by the development of East African gas basins and the fasttrack development of new discoveries as seen with Eni’s Zohr field in the Mediterranean and ExxonMobil’s Liza field offshore Guyana. 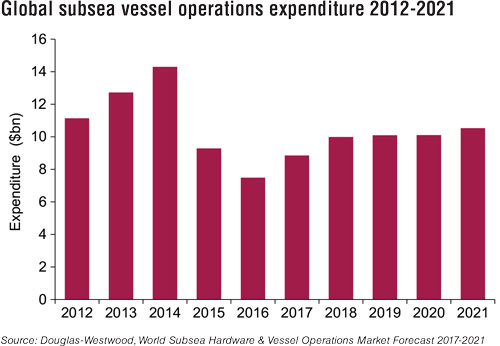 Pipelay vessel expenditure will represent 15% of global subsea operations vessel expenditure. However, pipelay expenditure is expected to grow at a negative CAGR of 4%, with strong activity expected in the first three years of the forecast period. This will be driven by large projects such as the Trans Adriatic Pipeline, TurkStream, and the Sur de Texas-Tuxpan (Marino) gas pipeline. Other major pipeline projects such as the Nord Stream II and the SAGE pipeline will drive vessel demand days for pipelay over the forecast period.

Flex-lay and reel-lay will both account for 15% of total expenditure, supported by large subsea umbilical, riser, and flowline projects in Brazil, the US, and Norway.

Southeast Asia will be the largest spending region for subsea vessel expenditure, accounting for 13% of global vessel operations spend between 2017 and 2021. The region will account for 16% of global vessel demand days over the forecast period, predominantly driven by IMR and pipelay activity. China and India will drive vessel activities in the rest of Asia, accounting for 7% of global spend. No other countries are expected to have any subsea developments over the forecast in the region, though Bangladesh, South Korea, and Taiwan will require IMR activities over the next five years.

North Africa and Australasia will each account for 4% of total spend over the forecast period, with approximately 28,000 vessel demand days. In North Africa, activity is expected to intensify during the 2017-2019 period, due to the development of the Zohr field and BP’s investment in the Atoll and West Nile Delta projects.

The start of offshore development activity in Mozambique in the latter years of the forecast period will drive vessel activity in South and East Africa, with Eni’s commitments to developing the Coral South FLNG project.

The project development plan involves six subsea wells feeding gas to an FLNG unit with a capacity of 3.3 MMtpa. Furthermore, Eni and its Area 4 partners are also planning to develop the Mamba field, with the initial development plan expected to send gas to onshore LNG trains at Afungi. This further improves the prospects of subsea vessel activity in the region in the long term. However, this frontier region will only account for 2% of global subsea vessel expenditure between 2017 and 2020.

West Africa’s subsea vessel expenditure will account for 12% of global spend, declining 2% year-on-year. This drop is due to delays in sanctioning large projects such as Bonga South West, where Shell has chosen to undertake a new front-end engineering and design study with the aim of reducing the field’s development cost. 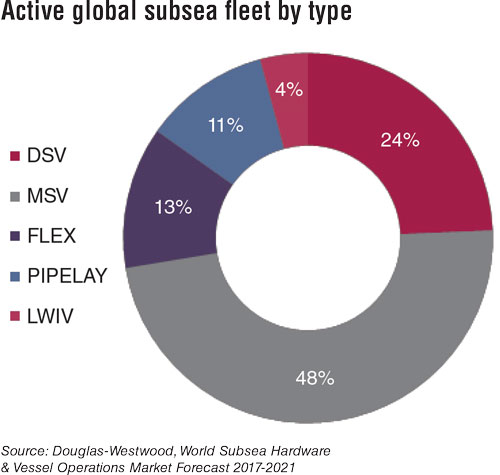 Subsea vessel expenditure in the Middle East will mainly be driven by pipelay and IMR-related activities, as the region has only a handful of subsea developments historically. The region’s field development-related vessel activities will be driven by Noble Energy’s Leviathan field, which also had its development plan revised. Phase one will now be exploited by subsea wells on the deepwater field feeding produced gas to a shallow-water platform.

Eastern Europe and CIS is a region driven by pipelay activities, accounting for 52% of subsea vessel operation expenditure in the region. Furthermore, the development of BP’s Shah Deniz Phase II represents the main subsea project in the region over the forecast period.

The majority of vessel demand days in Norway and the UK will be for subsea intervention, which will account for 19% and 20% of expenditure in both countries, respectively. This is due to a high number of mature subsea wells and a proactive approach toward the use of advanced technology by local E&P companies.

Brazil will account for 11% of global expenditure, driven primarily by deepwater developments in its presalt basin. This will be driven by several field developments, including Buzios, Cernambi, and Lula. The full development of the giant Libra and Sepia fields will also drive vessel operations expenditure in the latter years of the forecast. Other countries in Latin America will account for 4% of vessel operations expenditure over the next five years, with developments such as Sea Lion off the Falkland Islands and the Liza field offshore Guyana, being the highlights for vessel demand days.

The North American region is primarily driven by the US, accounting for 12% of global expenditure. The US is a mature subsea market; however, greenfield developments such as Mad Dog Phase II and IMR-related activities on the country’s large offshore-installed base will drive expenditure over the forecast. Canada, which is the only other country accounting for activities in North America, will contribute about 1% to global expenditure over the forecast.

Cyclicality is an inherent characteristic of the subsea vessel market. Since 1960, two major build cycles have taken place. The most recent cycle started in 2006 and has since seen more than 400 subsea vessels delivered so far. The most recent build cycle has been characterized by a need for larger and higher specification vessels which are required for the challenges of deepwater development. Despite the decline in the number of vessels ordered over the past two years as a result of sustained low oil prices, the order backlog remains strong, hence propping up delivery activities to-date.

Among the various vessel types, MSVs have the highest orderbook-to-existing-fleet ratio, while the proportion of light well intervention vessels in the global fleet will remain low. DW expects vessel utilization to improve over the forecast, with day rates expected to improve as vessel demand days increase.

Despite oil prices suppressed below $50/bbl for much of 2016, global subsea vessel operations expenditure will grow at a 4% CAGR over the next five years. Recent vessel order intakes have been relatively low; this is not expected to increase until well into the 2020s, marking an end to the current newbuild cycle. Vessel utilization is set to improve over the medium term, as operators continue to scrap non-competitive units, supporting a vessel supply-demand balance. Despite market uncertainties, offshore vessel activity will find solace in the potential recovery of oil prices, which will prompt field operators to sanction a number of offshore projects, driving vessel demand days, while other IMR-related activities will also be of priority.

Mark Adeosun is the author of Douglas-Westwood’s World Subsea Vessel Operations & Hardware Market Forecast 2017-2021. Since joining Douglas-Westwood in 2013, Adeosun has authored a number of offshore industry market forecasts and has also conducted high-level research into various oil and gas projects, with a concentration on offshore drilling and deepwater activity. He has undertaken market modeling and analysis, focusing on offshore markets and E&P activities. He has a BSc degree in geology and a Master’s degree from the University of South Wales in Geographic Information Systems.