The good news is that Seadrill has secured a two-year drilling contract offshore Angola for the semisubmersible West Eclipse, due to start in 2Q 2016. 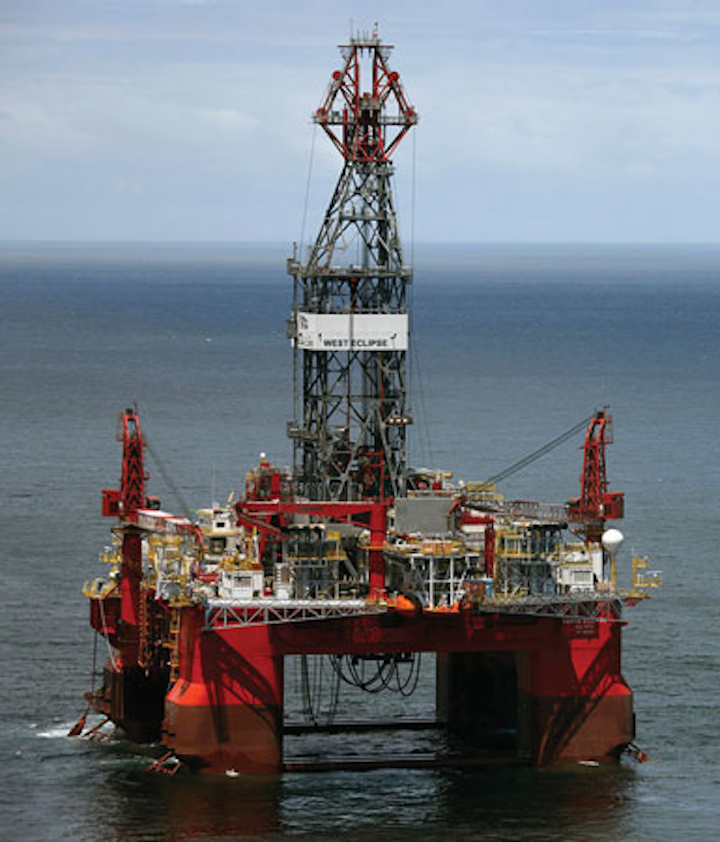 The good news is that Seadrill has secured a two-year drilling contract offshore Angola for the semisubmersibleWest Eclipse, due to start in 2Q 2016. Currently the contractor’s backlog totals $5.1 billion, comprising $3.9 billion for its drilling floater fleet and $1.2 billion for its jackup fleet. The average contract duration is 18 months for floaters and 13 months for jackups.

The bad news is the offshore drilling market continues to be oversupplied, the contractor says, and contracting activity has sunk to levels last seen in the 1980s. As oil companies’ capex continue to decline, Seadrill expects that the majority of rigs with contracts this year will not find suitable follow-on work. As a result, many will likely be idle for a prolonged period, accelerating cold stacking and scrapping activity. For the time being, oil companies will continue to work on managing their existing rig capacity, the contractor adds.

Despite the industry’s subdued mood, Sea-drill remains positive on the long-term outlook. Eventually a supply imbalance is inevitable, leading to a rebalancing in the oil markets, the company says. Offshore oil fields represent a material portion of most major oil companies’ reserves, Seadrill points out, and their production remains a cost-competitive source of hydrocarbons. When the cycle turns, the company foresees a strong future for its modern, high-spec fleet.

Transocean Ltd. and Keppel Offshore & Marine Ltd.’s shipyard, Keppel FELS, have mutually agreed to defer the delivery and related payments of five high-specification jackups until 2020. The Super B 400 Bigfoot Class jackup drilling rigs are now scheduled to be delivered in two and three-month intervals beginning in 1Q 2020. The jackups will be capable of operating in water depths down to 400 ft (122 m) and drilling wells to 35,000 ft (10,668 m). Keppel FELS secured the $1.1-billion order in November 2013, with the original delivery dates scheduled to occur from 1Q 2016 to 3Q 2017.

The rig is in the late stages of construction at the Sembcorp Marine Jurong Shipyard in Singapore. An investigation into the cause of the incident has been completed and damage is believed to be confined to a crane onboard the rig and some cabling. Delivery of theNoble Lloyd Noble is now expected in early to mid 3Q 2016. After mobilization to the North Sea, Noble expects the rig to begin a four-year primary term contract with Statoil during early to mid 4Q 2016.

Meanwhile, Ensco has announced plans to restructure its fleet and intends to scrap or permanently retire five more jackups and one more floater not currently held for sale:ENSCO 56, ENSCO 81, ENSCO 82, ENSCO 86, ENSCO 99, and ENSCO DS-1. According to CEO and President Carl Trowell, these rigs “are no longer part of Ensco’s go-forward fleet.” Three floaters and three jackups previously classified as held for sale will also be scrapped.

And, adjustments are being made on other fronts. Statoil has notified Songa Offshore that it is exercising its contractual rights to reduce contract lengths on two newbuild Cat D semisubmersible drilling rigs. The Norwegian operator ordered four Cat D rigs for wide-ranging operations in the North Sea. Deliveries have been delayed due to issues at the construction yard in the Far East.

Statoil’s drilling contracts stipulate that it is entitled to shorten their duration by the same amount of time as the rigs have been delayed. As a result,Songa Equinox’s contract will be cut by 347 days and the contract for Songa Endurance by 184 days.

Songa Encourage and Songa Enabler are due to begin their drilling contracts in April and August 2016, each around four months after their respective pre-agreed delivery windows.

In a ceremony held at the Daewoo Shipbuilding & Marine Engineering Co. Ltd. (DSME) shipyard in Okpo, South Korea, Petronas officially named its first floating LNG facilityPFLNG SATU. The vessel, which is expected to be ready for sail away in 2Q 2016, will be moored at the Kanowit gas field, 180 km (112 mi) offshore Sarawak, Malaysia. It has the capacity to produce 1.2 million metric tons of LNG per year. The DSME-Technip consortium performed the engineering, procurement, and construction work for the vessel and topsides.

Petronas’ President and Group CEO Datuk Wan Zulkiflee Wan Ariffin said: “ThePFLNG SATU is a testament to the engineering capabilities of Petronas and its partners. Today, we have pushed the boundaries and turned our technological aspirations of having an LNG plant on a floating vessel into reality.”