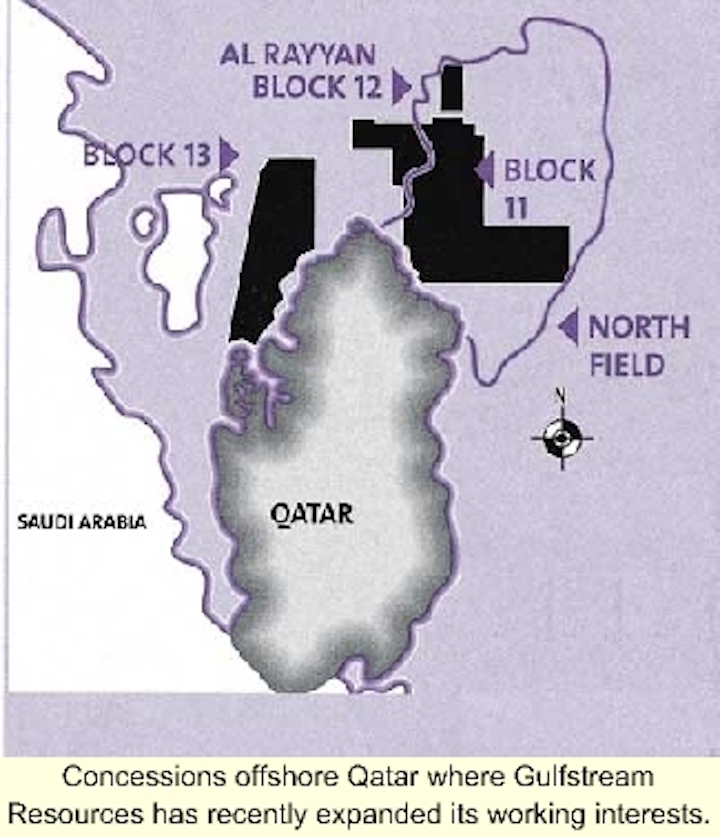 Gulfstream's investors gave CEO J. Angus McKee a verbal pounding during his recent presentation in London. The company's share price and net income had tumbled, and Canadian banks were turning deaf ears to his requests for loans. But McKee begged a further period of indulgence, as markedly higher returns beckoned.

Calgary-based Gulfstream has channeled its energies into the Middle East, which is a slow-moving region of opportunity - especially for a low-key independent. The company has been active periodically offshore Qatar since 1976 and operates a gas field development onshore Oman.

Since 1994, the company has been party to the 1976-negotiated exploration and production sharing agreement which covers Qatar's producing Al Rayyan oil field, Block 13, and North Field natural gas. Late last year, following various agreements with other Qatar Consortium companies, it raised its interest in these assets to 65%.

Gulfstream did the same in Block 11, where it is now a 49% partner. Both transactions could cost the company a total of $21 million.

Al Rayyan in Block 12 came onstream late in 1996 through a leased platform and storage tanker. By the end of last year, 27 million bbl of oil had been produced. Today, production is about 15,000 b/d from eight horizontal wells. The 25 degree API oil is sold under a long-term contract at a price related to Arab heavy crude.

Commercializing the field was a make-or-break situation for the Qatar consortium, which otherwise faced expiration of its oil and gas rights in 1996. Subsequently, it was granted a long-term development license for Al Rayyan under Arco's stewardship. The latter was later replaced in this role by its new owner BP.

The initial four-well development was expanded to six wells late in 1997 and then to eight in mid-1999. However, the original production target of 19,000 b/d was constrained by OPEC quotas and averaged just 12,000 b/d in 2000. Output was hit also by optimization initiatives and a shutdown instituted by BP for maintenance and safety-related upgrades.

Al Rayyan is a very low relief, anticlinal structure with a maximum structural height of 21-24 m across a 10-km diameter. The producing Arab formation has strong water drive, high porosities for a carbonate field (20%) and good permeability, providing a potential 30% recovery factor.

Producing horizons are Arab-A and Arab-C, where there are respectively two and six wells in operation. These horizons are part of the Arab sequence formed by shoaling of the Tethys Sea in the Late Jurassic period. The sequence is capped by the huge Hith anhydrite.

A phased approach was chosen, due to the field's low relief, variable recovery potential and an active aquifer, which necessitates handling of large volumes of water.

Currently, production potential is limited by the temporary platform's electrical and fluid handling capacities and high lease costs. This, combined with the OPEC restrictions, has caused cash flow from Al Rayyan oil to be constrained.

Another problem was Arco's approach. Late in 1998, Qatar's government had approved a development plan to replace and expand the facilities, boosting oil throughput substantially. But after 18 months of tendering, Arco came up with a new reserve estimate, stating that the development was not, in fact economic. This left the government confused, said a Gulfstream director: "It took significant work by us to rescue the situation."

BP focused on the situation when it moved in as operator in April 2000. It persuaded Gulfstream and the remaining partner Preussag Energie to acquire 3D seismic across the whole field to assist placement of future production wells.

Reportedly, the government opposed this at the time, but the shoot went ahead with positive results. BP has upgraded reserves from the 65 million bbl booked by Arco to 91 million bbl.

This new figure formed the basis for BP's updated development plan, presented last November. It involves replacing the temporary platform with a refurbished jackup capable of producing 45,000 b/d of oil and handling 180,000 b/d of fluids. BP has since upped its recovery estimate further to 105 million bbl.

Qatar's government, however, favored a much lower extended production plateau, viewing this as a more financially stable scenario. Eventually, the consortium agreed to a base case whereby two sidetracks would be drilled this year, increasing production from the existing platform to 17,000 b/d. By March 2002, the replacement jackup platform would be in place, with six new horizontal producers added, boosting output to 25,000-35,000 b/d (provided the consortium can demonstrate no damage to the reservoir).

However, a further delay has now arisen, instituted by Gulfstream as the 65% majority partner in Al Rayyan. The firm has refused to sanction the proposed drilling program, claiming that the proposed costs are 40% too high.

Assuming these differences can be resolved, the new development should incur operating costs of $2/bbl during plateau production, compared with the current $5.60/bbl, before drifting upwards to $3.15/bbl over the forward field life.

To the east and south of Al Rayyan is Qatar offshore Block 11, covering an area of 2,641 sq km. Eight wells have been drilled on this acreage, including ALR-8 which was drilled as a stepout to Al Rayyan in 1996, encountering oil in a separate structure. Here, operator Wintershall and Gulfstream plan to drill two wells this August to test two prospects, including the structure intersected by ALR-8.

Reserves of 300 million bbl plus are being targeted, but if the end-product proves much smaller, there is still potential synergy with the Al Rayyan development. Wintershall has been examining a new play in Block 11 which is on trend with one of Abu Dhabi's more prolific plays.

Off northwest Qatar, Block 13 is another prospective area, but this has been under force majeure since 1986, due to a border dispute with Bahrain. The block covers 1,380 sq km and is on trend with Dukhan, Qatar's largest producing oilfield. Once the dispute is resolved, oil and gas exploration rights would extend for seven years. Gulfstream currently is a 65% participant.

Since 1976, the Qatar Consortium has also held rights to natural gas from a portion of the giant North Field, and this was the real enticement for Gulfstream from the outset. Between 1997-99, these terms were amended annually, but the rights subsequently lapsed in July 2000. Currently, the partners are seeking a five-year extension. Recently, pre-engineering was completed for a $1.4 billion production, processing and transportation project to deliver 800 MMcf/d to Dubai, but gas sales agreements are being complicated by numerous competing projects in the Persian Gulf. Whatever happens, this is an Area of Mutual Interest, said a Gulfstream spokesman. "So, if someone wants to do a project not in our area of the North Field, they still have to invite us to participate."