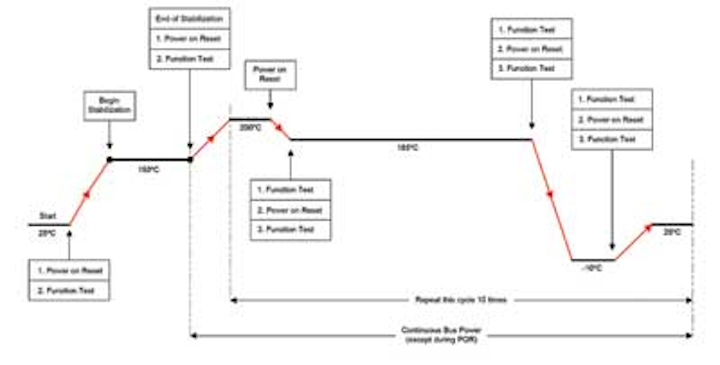 Thailand to the rescue

For the past six to eight years, the Gulf of Thailand has provided the missing link—a viable market of HP/HT wells. The Gulf of Thailand lies to the east of the country and is bordered by Cambodia, Vietnam, and Malaysia. It is about 175 mi (389 km) wide, and 470 mi (750 km) long with a large natural gas play in the north and a corresponding oil play in the south. It is a perfect "laboratory" in which to perfect HP/HT tool systems.

Over the past four years, the company has systematically developed and deployed an LWD family of downhole tools called HeatWave. It has a suite of tools that include a hostile environment logging MWD/pulser, a TVM II vibration sensor, a BAP borehole/annular pressure tool, and an HAGR azimuthal GammaRay tool. All 9.50-in. and 8.25-in. tools are rated to 25,000 psi and 374°F (190°C). 6.75-in. and 4.75-in. systems are rated to 30,000 psi (2,068 bar) and 374°F. A full tool string includes (from top to bottom) the pulser/driver, battery pack, HAGR, BAP, and an integrated directional sonde.

All tools are subjected to a rigorous time/temperature test that is repeated 10 times. Weatherford has adopted the condition-based maintenance (CBM) philosophy. The technique measures the condition of critical components but only replaces those whose condition signals that they need to be replaced.

Pioneered by the aviation industry, acceptance of CBM has grown rapidly. Today large fleets of airplanes, over-the-road trucks, and railway cars are maintained only when they signal they need it. For example, the systematic analysis of crankcase and transmission oil can detect increases in elemental concentrations of trace metals that warn of excessive wear of gears, pistons, and shafts. Instead of tearing down transmissions or engines after a certain number of operating hours, operators only tear down those that exhibit warning signals in the rapid build-up of certain elements. Typically, automotive companies suggest a change of crankcase oil every 5,000 mi (8,047 km). But those performing chemical analyses of their fleets have discovered that only a fraction of their engines actually need an oil change. By waiting until actual conditions indicate the need for a change the companies keep their fleets rolling while saving considerable expense.

At Weatherford, the CBM uses key indicators to trigger maintenance, such as exceeding a specified number of indexed hours, running above a specified temperature, or exceeding vibration limits.

CBM standards vary for different components of the tool string. Some components are tougher than others. But the CBM technique systematically identifies the weak links before failure and in time for replacement.

By making critical measurements of conditions affecting key components and recording them digitally, the company is able to keep track of each tool in each string. Job planning considers the remaining life of each component before committing it or its tool to an HP/HT job.

Of all the oilfield equipment, two systems stand out as leading candidates for HP/HT consideration: perforating systems and downhole production gauges. In the case of perforating, the risk of premature detonation gets everyone's attention. Manufacturers have spent decades upgrading the explosive compounds used in shaped charges as well as blasting caps and primacord. There is no second chance to undo a mistake when perforating guns are involved.

In the case of downhole pressure/temperature gauges or intelligent well systems (IWS), time is the critical factor. The present record was set recently in the Bay of Bengal, another hot spot. A Schlumberger Signature Gauge survived for 21 days at 410°F (210°C) and 30,000 psi. The information it provided proved critical in designing the lower completion of an ultra-deep well in the Krishna-Godivari basin.

Another area of improvement is corrosion. Extended exposure in wells with high concentrations of H2S and/or CO2 can quickly ruin ferrous alloy tools. To date, one of the only alloys found to be impervious to this kind of corrosion is MP35N. A multi-phase alloy perfected by the Latrobe Steel Co. in Pennsylvania. High bottomhole pressure exacerbates the effect.

More and more hostile environment areas are being discovered. Extensive research is ongoing within the service and supply industry to improve performance of downhole tools and instruments under extreme environmental conditions. Engineers are systematically searching for the weak links and eliminating them, one at a time. On the horizon are the geothermal wells – a source of renewable energy that has clear advantages over wind or solar energy because it is available 24/7. The commercial exploitation of geothermal energy will require even more resistant downhole tools.