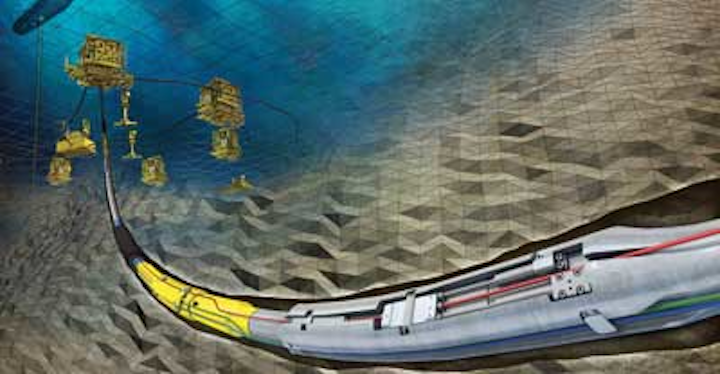 Deepwater engineering contractors outlined their visions of the way forward at the recent Offshore Northern Seas exhibition in Stavanger, Norway.

Representatives of Aker Solutions and Baker Hughes detailed some of the goals behind the companies' new Subsea Production Alliance, announced in April, which is official after clearing all regulatory hurdles. It combines Aker Solutions' offerings in subsea production and processing with Baker Hughes' strengths in well completions and artificial lift. The duo will work to deliver integrated, in-well and subsea production systems to improve the yield from, and extend the lives of subsea fields; and enhanced well intervention to optimize efficiency and lessen the risks in subsea projects.

Ian Ayling, subsea production business development director at Baker Hughes, said there was potential for growth subsea worldwide, and the industry was looking to achieve the same returns as from dry tree developments. "But subsea capex is increasing, while resultant revenues are staying the same or are in decline."

Ayling noted that such challenges are becoming much more difficult: "Development is extending into geologically more complex formations – presalt, deeper, hotter, higher pressure – and in more remote locations, all of which require more innovative developments." The onus is on service companies to address these issues, he added, while at the same time finding ways of reducing the costs. Challenges for production include boosting the performance and recovery factor of subsea wells. "Often recovery is below 10%, and that's not acceptable – we must find ways to improve it."

Jonah Margulis, Aker Solutions' director of business development, said the alliance would look to steer subsea well management planning away from heavy workover systems to light intervention, with easier access to subsea trees. Earlier engagement with clients during concept evaluation would make a difference, he added, long before the decision is taken on the completion system. As for boosting subsea recovery, the alliance can offer a wide range of single or multi-phase pump solutions combined with different types of intelligent completion and artificial lift solutions, he pointed out.

Margulis also said the alliance would work on technologies including subsea-optimized downhole electric submersible pumps; integration of ESPs into subsea well jumpers for single-well boost or dual-boost applications, potentially in existing brownfield wells; medium-cost light intervention risers deployed from a rig, and ultimately riserless intervention; and on ways of lifting oil longer distances to platforms, "although we will need the power to do that."

GE Oil & Gas introduced DVXT, a 5- x 2-in., 10,000-psi (689-bar) deepwater monobore vertical tree with tubing head spool (THS), designed to operate in up to 3,000 m (9,842 ft) of water, in a temperature range of -18°C to +151°C (-0.4°F to +304°F), and with a design life of 30 years. Mike Lenham, GE's subsea trees senior applications engineer, said the new system incorporates various advances that came out of dialogue with the company's major customers, but at the same time relies on proven technology, i.e. valves and connectors.

"DVXT can be deployed on drill pipe, wire, or the completion/workover riser string," said Lenham. "Or you can run the BOP on top of the tree and the landing string to do workovers instead of using a completion intervention riser. We can customize flexibility into the design according to the customer's requirements."

Other features include 5.25 MMft/lb bending capacity connector; standard alloy 625 clad pipe overlay for the production bores, sealing surfaces, and valve pockets – "this allows the system to operate in a broader range of temperatures than super duplex," Lenham said. A compact design allows the tree to pass through a 16 x 16-ft (4.8 x 4.8-m) moonpool.

Depending on the specs, the typical weight is 52 metric tons (57 tons) for the tree and 32 metric tons (35 tons) for the THS which houses a wellhead adapter and tubing hanger – "we can take tooling from our horizontal trees and attach it to this," Lenham added, "and the running tool for the hanger is provided with a soft landing." In line with emerging requirements, the DVXT also incorporates a 130-in. valve block, which compares with 98-in. for horizontal tree valve blocks.

GE foresees demand for the new tree range in most established and emerging deepwater regions, and off northwest Europe. The company is establishing a new facility in Batam, Indonesia, to build and test these trees. It is expected to be operating within two years, Lenham said.

Chris Phebus, GE's engineering director, subsea products and projects, said the company expected subsea production to grow between 9% and 15% during 2012-2020. "Deepwater is putting tremendous loads on our equipment," Phebus explained. "Current pressure limits are 15,000 psi [1,034 bar], with 20,000 psi [1,379 bar] to come – we are developing BOPs and wellheads for these conditions." Higher-temperature downhole environments will also have to be taken into account. "For a while we were designing equipment for 250°F [121°C]," Phebus added. "Today it's for 350°F [177°C], and there's talk now of 450°F [232°C]. To this end, we are looking at materials issues such as increased creep and higher yield strength. This could mean either changing equipment internals or enhancing them with improved geometry."

GE is also considering requirements for ultra-long offset subsea production – out to 220 km (137 mi) – using fiber optic technology; ice interaction with subsea equipment in arctic environments; and lifting recovery from subsea wells using GE equipment from the global average of 35% to 60%. "We can refine intervention to clean up wells and get more out of them," Phebus said, "combined with subsea compression and pumping. But it's also critical to get more power from the surface to the seabed to do this – the main challenge is the HV connectors."

KBR subsidiary GVA showcased its latest drilling submersible, the GVA 8000. This is designed for operation across a range of environments, from harsh to benign, and from relatively shallow to ultra-deepwater (70-3,000 m/230-10,000 ft). However, its low motion characteristics, high deck load capacity, and structural strength makes it well adapted for deeper water, GVA claims. The same applies to the maximum rated drilling depth of 40,000 ft (12,000 m).

The twin-hull configuration is connected via transverse bracings, four columns, and a box-shaped deck structure. The deck box, which contains most of the machinery spaces, is designed to provide strength and added buoyancy during extreme conditions. Two enclosed decks provide a large area for material handling and equipment, more spacious than on previous GVA semis. Total deck payload is more than 8,000 metric tons (8,818 tons), with additional payload for fluids in the columns and pontoons.

According to project manager Daniel Aneljung, the company views the new design ultimately as a replacement for the GVA 7500, of which the ninth rig is currently under construction. "We believe the GVA 8000 will provide the best motions and operability of any rig operating in the North Sea," said Aneljung. "Most often it is the heave motion that causes rigs in this region to stop drilling in harsh weather, so we have optimized the hull shape to better withstand these conditions."

"It's a question of playing with dimensions and the ratio between displacement and the water plane area, or with the shape of the pontoon columns," Aneljung added. "Also, with this design we have the possibility of increasing the operating draught – typically 23 m to 27 m (75.5 ft to 88.6 ft) for improved heave response during BOP handling or other heave-sensitive operations. In this regard we have done a lot of analysis and comparisons with similar designs, based on model tests. We believe we have achieved the best heave response compared with all our competitors."

Aneljung says oil companies are asking for improved heave response and motion in order to extend drilling in strong wave conditions in the North Sea and west of Shetland, and also in areas such as offshore Australia. This includes deepwater off South Australia, where BP plans exploration drilling. The GVA 8000 is adapted to take into account these extremes.

GVA has worked with Statoil on the new Cat D "workhorse" semisubmersibles that are designed for a range of tasks on Statoil's mature North Sea fields. "Statoil focused strongly on the working environment, green environment, and safety," Aneljung explained, "including ample space for materials handling, avoiding the lifting of heavy equipment onboard the rigs, and good visibility from the two main deck cranes. We have taken a lot of these ideas for the GVA 8000."

The Norwegian authorities have also pressed for improvements in station-keeping, and their requirements have been incorporated into the new semi. During drilling, the rig can operate either with DP-3 thruster control or with a 12-point mooring system. This compares with eight mooring lines for previous rig designs. The change follows numerous recent incidents in rough seas.

"On the eight-point mooring systems we had the maximum chain dimension acceptable for operations in the North Sea," Aneljung noted. "To increase capacity, we have expanded the number of lines so that the rig can stay in position to drill in harsher conditions. This arrangement is more secure, but it is not mandatory – 12 lines should only be needed for shallower water, harsh environment operations."

Some of GVA's clients have noted that the new rig's mud handling capacity is greater than on the company's previous semis, Aneljung adds, with four mud pumps in base configuration, with the possibility to add a fifth. "The large mud pump capacity allows for a split system between OBM, WBM, and completion fluid. For better circulation, handling and access the mud storage tanks are cylindrical and are all located in the columns. The mud pit capacity may be increased further by additional pontoons."