p.2 ~ First LNG-powered support vessel to debut in the Gulf of Mexico 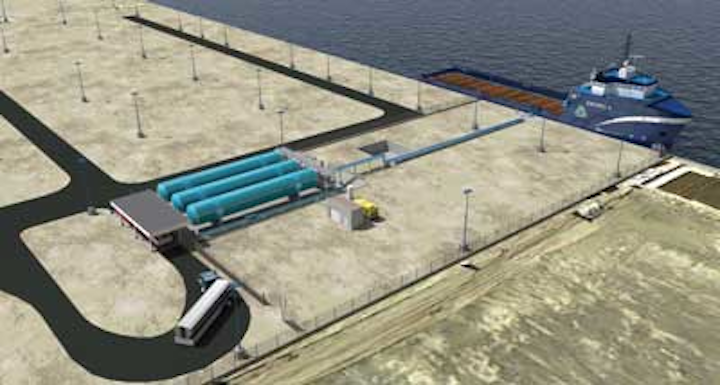 The LNG OSV design was developed in accordance with the Interim Guidelines, USCG Policy Letter, and ABS requirements for gas-fueled vessels. ABS and the USCG worked closely with the owner, designer, and equipment manufacturers to promote safety and consistency and to address the technical challenges related to the concept designs, including the location of fuel tanks, space limitations, double-walled stainless steel piping, and cryogenic materials.

The project is enrolled in the USCG Alternate Compliance Program (ACP). The ACP is a process through which "recognized organizations" such as ABS are authorized by the USCG to conduct almost all plan review and surveys on behalf of the USCG. The vessels being evaluated must comply with the class rules, all applicable IMO regulations (e.g., SOLAS, MARPOL, etc.), and an additional list of USCG specific supplemental requirements. The USCG conducts oversight and inspections at its discretion and remains responsible for issuing the final USCG Certificate of Inspection. However, since the requirements for gas-fueled ships are not published in the USCG regulations and because the IMO International Code of Safety for Ships Using Gases or Other Low Flashpoint Fuels (IGF Code) is still under development, the USCG has retained all plan review and inspection responsibilities for LNG fuel gas systems and equipment.

Together, the vessel owner and designer chose a proven diesel-electric OSV design as the foundation for their program. The design called for a 302-ft (92-m) PSV with a total installed horsepower of more than 7,500 kW. The project was simplified by using a parent vessel design. This allowed the vessel owner, designer, USCG, and ABS to focus only on the gaps and technical challenges, such as addressing hazardous areas and best practices for LNG tank venting arrangements.

While ABS did not review or approve the LNG systems on behalf of the flag state (USCG) for this project, it played a role in facilitating the process of approval and reviewed the systems for compliance with its own class requirements. Based on the ABS GFS Guide and feedback from the designer and equipment suppliers, the class society established a document register needed to support the fuel gas system plan review. The document register was annotated to indicate the specific plans that were required for information, review, and approval by the class society and the plans that require an independent review and approval by the USCG Marine Safety Center.

The class society also provided a series of technical training programs aimed to enhance the understanding of the design, operational, and regulatory aspects of using LNG as a fuel. Surveyors experienced with LNG systems were brought in to support the installation, testing, and commissioning of the LNG fuel gas systems.

Harvey Gulf's LNG-fueled OSV fleet also is being built to the specifications of the ENVIRO+ and Green Passport (GP) notations under ABS classification. To comply with the ABS certification requirements, vessels must be entirely constructed with certified environmentally friendly materials and, among other specifications, be outfitted with advanced alarms for fuel tanks and containment systems. A certified environmental officer must man the vessel at all times.

Early adopters of environmentally friendly gas-fueled designs will be well prepared to comply with increasing emissions restrictions and will have the added benefit of achieving greater efficiency.

A fueling facility for LNG-powered OSVs

To widen LNG availability to the domestic offshore market, Harvey Gulf announced plans in February 2014 to construct the first LNG marine fueling facility in the US in Port Fourchon, Louisiana. The fueling facility is a critical first step to growing national LNG supply infrastructure and supporting OSVs powered by LNG.

The Port Fourchon LNG facility will consist of two sites each with 270,000 gal of LNG storage capacity. The tanks will be stainless steel Type C pressure vessels with vacuum insulation and carbon steel exteriors. Each facility will be able to transfer 500 gal/min.

The company will be the first US vessel owner and the first US bunkering facility operator to conduct LNG fuel transfers. With support at all levels from the USCG and class assistance in reviewing crew training procedures, the company's bunkering procedures and crew training requirements are under development. Harvey Gulf has requested guidance, input, and support from worldwide leaders in the LNG industry.

In early 2014, ABS and affiliated company ABS Group conducted a study to address specific issues associated with LNG bunkering as well as the infrastructure at ports and marine accessible terminals. The final report, "Bunkering of Liquefied Natural Gas-fueled Marine Vessels in North America," lays out a comprehensive road map to guide stakeholders in navigating LNG bunkering issues and the emerging technological and regulatory implications of using LNG as fuel.