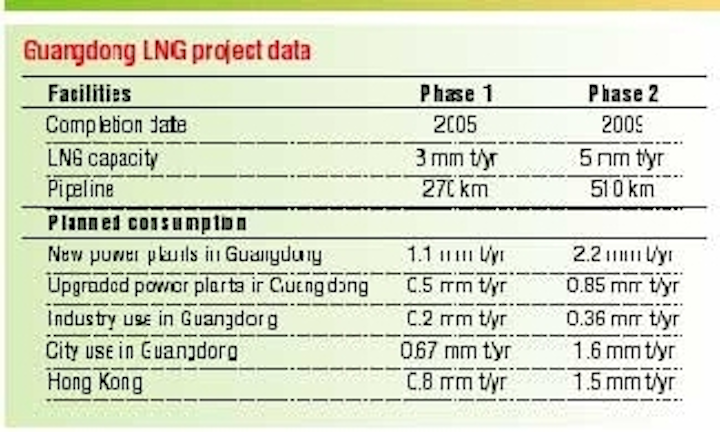 During the next 10-15 years, China will join Japan and South Korea as one of the main importers of natural gas. Despite the high discovery rate of late in the Bohai Gulf, China's domestic gas reserves, produced mainly from onshore fields, are insufficient to meet the country's energy needs.

In the future, supplies will have to be drawn in through long distance pipelines from Sakhalin Island, the Caspian region, or as LNG via the planned new import terminal in Guangdong.

Philip Andrews-Speed of the Centre for Energy Petroleum and Mineral Law and Policy at the University of Dundee in Scotland outlined the challenges facing China's energy planners in a paper at SMi's recent LNG conference in London. Despite their ambitions, he pointed out, natural gas currently furnishes only 2% of China's energy demands, with 70% still provided by coal.

Altering that equation has proved difficult, in part due to the country's geographical distribution of primary energy resources. Much of its coal, oil, and gas reserves are spread across northern regions, far from key centers of demand in the south.

Main offshore gas production comes off Hainan island in the southeast. In the onshore gas production regions of Xinjiang and Qinghai in the northwest, proven reserves are several hundred Bcm. Nearly all gas produced is consumed within a few hundred km of the field location. CNPC, the state petroleum company that controls all onshore production, is in a powerful position to influence policy concerning a nationwide gas transmission network.

At present, there is no explicit policy and planning framework for natural gas. Official projections put China's demand for natural gas in 2010 as up to 100 Bcm, of which 25-23 Bcm could be used for power generation (compared with 2-3 Bcm today). Despite the growing availability of domestic gas sources, deliverability is proving difficult:

The onus is on the government, therefore, to formulate a coherent national gas policy, said Andrews-Speed.

Official Chinese forecasts suggest that domestic gas production will rise from 23 Bcm in 1999 to 50-70 Bcm by 2010. The northern/ northwest basins will generate over 50% of this, with much of the remainder coming from Sichuan Province in the southeast and China's offshore fields. The deficit in energy supply will have to be covered by imports, most likely from Siberia and Sakhalin Island. Immediate obstacles for would-be importers to clear are:

The author claims that the high financial and political risks associated with building a pipeline eastwards from central Asia would be high. The LNG plant in Guangdong seems a more realistic option, and this will likely be followed by a second plant in Shanghai.

Another deterrent is that with the exception of the Guangdong project, no policy framework exists that allows potential investors to assess the risks and rewards. The recent lifting of prohibition on foreign ownership shows there is a desire to formulate such a policy, but as yet no coherent approach has been put forward.

Basically, China's problem is that no single institution has been charged with formulating such policies. Since the Ministry of Energy was dissolved in 1993, responsibilities have been shared by the State Development Planning Commission, the State Economic and Trade Commission, and the Ministry of Science and Technology, under the aegis of the State Council. Compounding the problem is the fact that since the reform of government and state enterprises in 1998, the balance of power for formulating and implementing energy policy has shifted away from central government to the state enterprises and provincial governments.

Currently, plans have been drawn up to lay six long distance domestic gas pipelines and to approve foreign involvement in construction and ownership of these lines. Feasibility studies are also underway on the import lines from Russia and Central Asia. Once this infrastructure takes shape, however, China will have to address issues like the variable nature of demand and supply.

For example, gas could be sent to Beijing both from Russia and from Shaanxi Province, while Shanghai could be sourced from overland and offshore pipelines as well as LNG. For these options to work, transparent mechanisms will have to be established for producer and consumer gas prices.

The current system is determined by a "command and control approach," the author stated, which lacks predictability, transparency, and stability. If China decides to adopt the market approach, it would have to review CNPC's monopoly position.

As for LNG, the choice of Guangdong on the southeast coast as the first reception terminal was driven by economic considerations. The population of 75 million on this part of the coast provides around 10% of China's gross domestic product (twice the national average). It also accounts for 40% of China's exports, yet imports most of its primary energy supply and a growing proportion of its electricity.

Following a bidding process last year, a foreign consortium was selected that will take a 30% stake in the new LNG project. Other shareholders will be CNOOC with 33%, numerous Guangdong companies holding a collective 31%, and two Hong Kong utilities with 6%.

Despite the strong prospect of a second terminal following swiftly in Shanghai, China may seek to remove the need for foreign investments for future LNG projects after the first two or three have been safely commissioned, the author claimed, even though this would run counter to World Trade Organization regulations. He also pointed out that legal and administrative problems plagued foreign investors in electrical power ventures during the mid-1990s, cooling interest in subsequent projects.