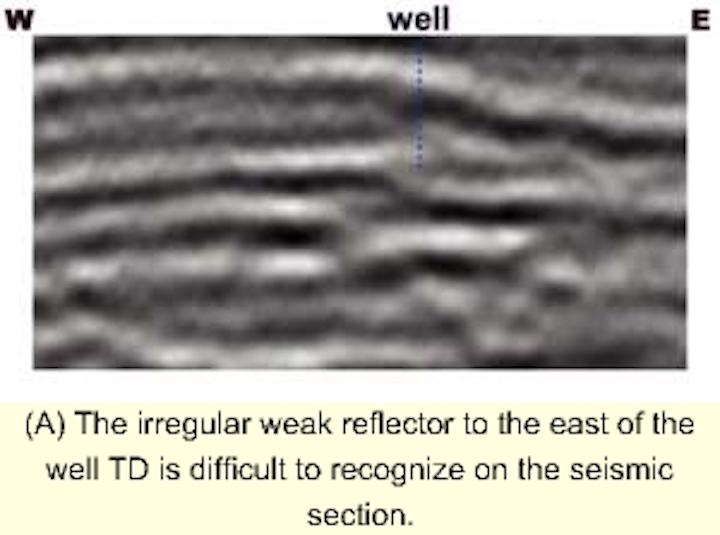 Application of a new direct hydrocarbon indicator (DHI) technology that combines multi-attribute analysis with volume visualization revealed a subtle seismic anomaly with high resolution. The anomaly is associated with an oolitic limestone gas reservoir in the Lower Cretaceous carbonate trend in the East Central Gulf of Mexico.

An estimate of the reservoir's potential reserve is on the order of 100 Bcf of natural gas. Yet, this large gas reservoir could have been easily missed with traditional interpretation methods because of its non-obvious seismic response (relatively low amplitude, small structural relief, and irregular reflecting surface). The data used is from an OBC 3D seismic survey that covers some 16 sq miles. It was acquired by TGS-Nopec in Mobile Offshore Block 991 (MO 991).

After loading the data on a desktop PC workstation it took four hours to detect, isolate, and map the anomaly. For comparison, a traditional interpretation procedure required eight working days and comprised:

The resulting anomaly did not show the same detail as the one obtained from the multi-attribute DHI.

Multi-attribute analysis extracts two sets of four independent parameters characterizing the seismic waveform over one time-period that encloses a peak. One set forms the first attribute vector and characterizes the beginning-half of the waveform between the preceding trough and the peak. The other set forms the second attribute vector and characterizes the ending-half of the waveform between the peak and the following trough.

An advantage of such a separation is that attribute vector data is sparsely sampled in time. As a result, the four attributes sampled every half-period with full 32-bit floating-point precision require approximately two-thirds of the disk storage as the input seismic data volume.

A combination of the elements of an attribute vector into a single number is a DHI. Each DHI value is assigned a color, determined by mapping the range of DHI values over a color spectrum distributed within a sub-volume. Since there is no lateral mixing, the lateral resolution of a DHI is one trace interval in the line or cross-line direction.

In a 3D display, the locus of DHI's defines the structure and the color pattern shows the variation of waveform along that structure. Consequently, the multi-attribute technology differentiates small lateral variations with color in the waveform-shape of a reflector.

Thresholding of attributes before combining them into a DHI eliminates the DHI's whose attributes lie outside the limits. This together with the vertical separation between contiguous DHI's provides transparency in the 3D display. Further, since each reflector is separated above and below by one-half time-period, it is easy to capture an entire anomaly by interactively specifying a simple volume-window that approximately follows the anomaly structure.

As a result, actual DHI points associated with an anomaly are quickly isolated without horizon picking. This eliminates any potential human bias that occurs in traditional methods due to inaccurate or forced horizon picking in zones of poor reflection continuity.

The steps in the application of multi-attribute DHI to MO 991 dataset included:

The DHI was the average value of the two normalized attributes within the threshold limits. The range of DHI values in the entire volume was mapped onto a color spectrum. The DHI color was then rendered in the 3D cube at the (line, trace, time) location of the trough that followed the peak. Since DHI's are much sparser than equivalent seismic data samples, it is more useful to visualize a DHI slab than a thin slice or section. The color distribution in a slab display represents the average DHI value perpendicular to the plane of observation.

In sharp contrast, the anomaly can be easily seen on both the vertical section and time slab of the DHI data. In the map view of the 12-ms thick time slab, the anomaly is clearly bounded by faults to the north and south. Further, a channel splits the anomaly into two segments. Faults are also evident on the DHI display of the West-East line that passes through the well.

The isolated anomaly, in 3D against the background seismic lines through the well, shows that the bright DHI (red color) did not map onto either a bright amplitude or a smooth reflector. Instead, it mapped onto a weak irregular reflector. While this behavior is not uniquely diagnostic of a gas reservoir, it enabled the identification of a weak anomaly, indistinguishable from its neighbors on a conventional seismic section.

The application of multi-attribute DHI to the MO 991 dataset showed good promise for the detection of a reservoir anomaly. In order to consider the applicability of this technology to other potential reservoirs in the region, it is important to investigate regional geological and petrophysical factors that affect the seismic response.

The seismic section that runs through several wildcat discoveries of big natural gas reservoirs in the carbonate trend shows the character of reflections in the Lower Cretaceous interval. These reflections have generally weak amplitude and irregular surface, similar to the multi-attribute analysis example. An exception was the discovery at Viosca Knoll 252, where a gas reservoir in the grain shoal carbonate play was associated with a bright amplitude anomaly.

The discoveries line up along a NW-SE corridor that runs parallel to the shelf edge, further to the southwest. MO 991 lies at the NW end of the corridor and across from the Viosca Knoll area. The discovery well in this block was drilled in 118 ft of water to a depth of 15,400 ft. Grain shoal deposits of oolitic limestone in the Lower Cretaceous comprise the reservoir section in this well.

The play is set up by a down-to-the-south listric fault that probably caused the initial localization of the grain shoal deposits. Subsequent aggradation of these deposits constructed a low paleo-relief structure that was subsequently buried by micritic limestones providing the seal facies above the reservoir. Hydrocarbons migrated along the fault and filled the low-side of the fault.

The conjecture is that the improved porosity in the reservoir interval is the main factor affecting the multi-attribute response, and that the response adequately describes the reservoir. This conjecture must be tested via modeling by using the geological model and petrophysical parameters available from wells. Once the model-to-seismic response relationship and bounds for model uncertainty are established, this technology can be used as local empirical evidence for field delineation and extension.

Horizon picking is the workhorse of interpretation. Picking of reflections is based on human judgment, which is prone to error in areas of poor reflection quality. Forcing an interpretation introduces human bias. Further, the method is limited to the investigation of a few horizons, while the information contained in the large volume of seismic data remains un-utilized. The method fails in the absence of interpretable horizons or amplitude anomalies, which is largely the case in Lower Cretaceous carbonate trend.

3D visualization of DHI: In several recent methods, multi-volume attributes are extracted and combined into a DHI. DHI's are then rendered in one or more cube displays. This method has two problems. First, the number of attributes is generally large, several dozen in some cases. Since each attribute is sampled at the same rate as the seismic data, it requires the same storage as the input seismic data volume. So a large number of attributes present a serious data storage and access hurdle.

Second, a more fundamental problem with these attributes is that generally they are not independent of each other. The basic Hilbert attributes, envelope, phase, and frequency are indeed independent, but their resolution is poor. So, in most methods the list is augmented to squeeze more information about the seismic character of a reflection. The augmented list includes such attributes as RMS amplitude, average absolute amplitude, arc length, energy in the quarter lobe, acoustic impedance, etc.

DHI visualization that combines them produces an illusion of a different reflection character. In fact, the analyst observes the same effect, for example, a bright amplitude anomaly in many different forms. Aside from these problems, multi-attribute visualization systems require the use of large computer memory and expensive visualization hardware and software.

The conventional relative amplitude processed seismic section from Mobile Offshore Block 991 in the East Central Gulf of Mexico does not show any amplitude anomaly associated with a Lower Cretaceous producing reservoir. Yet, the visualization of multi-attribute DHI revealed a detailed reservoir with precise stratigraphic limits for further exploration.

There is a need to calibrate the basic attributes against the geological model and petrophysical parameters of the region. Once this is done and the attribute response to model uncertainty quantified, the application of this technique to quality 3D seismic dataset, such as this example, has the potential to uncover additional field extensions and yet undiscovered reservoirs along the Carbonate trend.

H. E. "ED" Denman is a geophysicist at TGS-Nopec Geo-physical Company ASA and has 26 years of experience in geophysical exploration (E-mail: edd@tgsnopec.com).

TGS-Nopec contributed to the dataset used in this study. Data analysis and suggestions were provided by Neil A. Moore of Seacon Computer Systems.