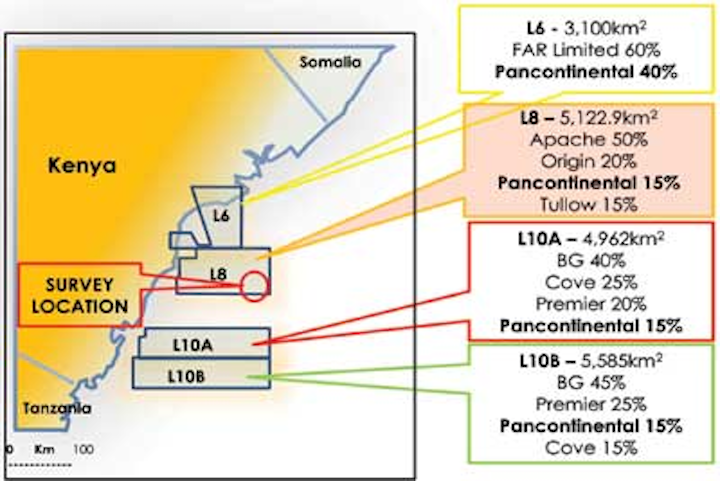 The Nanaa 3D seismic survey offshore Kenya in area L8 is complete for operator Apache Corp. The 1,400 sq km (541 sq mi) run in the southeast part of L8 covers the Nanaa and Kozi leads from the Tertiary to the Jurassic, and the Bundi and Tai prospects in the Cretaceous to Upper Jurassic. Processing and interpretation are expected to be complete by year-end.

Partner Pancontinental Oil & Gas NL says the inverted basinal setting in this part of Lamu basin is combined with a restricted depositional environment between the Davie Ridge and a faulted rift margin high. There is interpreted to be a thick oil-prone potential source interval, closure in prospects / leads directly above the source interval, and optimal structural timing and source maturation and migration. Seismic "flat spots," AVO anomalies, and interpreted naturally occurring oil seeps support the concept of oil generation, charge, and entrapment, says Pancontinental.

BC-10, Jubarte get seabed monitoring in deepwater Brazil

OYO Geospace has been contracted to supply $14.9 million in deepwater seabed seismic reservoir monitoring for the BC-10 field offshore Brazil.

Shell operates the field with 50% interest along with partners Petrobras (35%) and ONGC (15%).

OceanWorks International will provide a termination node for the Jubarte permanent reservoir monitoring project by Petroleum Geo-Services for Petrobras. The node will receive both the system sensor cables and the main backbone cable.

The M/V Geo Atlantic is conducting the survey and completion is scheduled for 2Q 2012 with final data available in 4Q 2012.

To the northeast of Gnaraloo, the S/RVeritas Viking II has acquired 3D seismic data for MEO Australia in the Timor Sea.

MEO was awarded the permit last June. The company says its analysis justified early investment in the 3D program which will cover the Marina gas and liquids discovery, the nearby Breakwater prospect and two further leads, all of which could be drilled at some point.

S/RVeritas Viking II earlier completed acquisition of the Zeppelin 3D survey for MEO over the AC/P50 & AC/P51 permits in the Ashmore Cartier region of the Timor Sea (Vulcan sub-basin). In total, 508 sq km (196 sq mi) of full fold data were recorded. Again, the results will be used to help determine prospects for future wells.

Searcher Seismic Pty Ltd. is working on 3,700 km (2,299 mi) of long-offset 2D seismic acquisition over areas 8 and 9 proposed for the May 2012 federal acreage release.

TGS continues its joint program with PGS in the Viking Graben of the North Sea. By the end of the 2011 season, 6,857 sq km (2,647 sq mi) of data had been acquired for this multi-year project. The data set is close to the recent Sverdrup discovery.

TheM/V Polar Duke acquired 1,055 sq km (407 sq mi) of new 3D data along the Nordkapp Platform margin fault in the Norwegian Barents Sea. TGS plans to will return this year to finalize the program which is close to several blocks nominated for Norway's 22nd licensing round.

Hampson-Russell Software & Services has redesigned its reservoir characterization applications. The new suite, named HRS-9, adds new functions and uses a common interface and data management system among all its modules.

The enhanced software interface acts as a dashboard, integrating all functionality from the previously separate programs into a single application.

Advances include multi-threaded 64-bit computing, allowing for the managed use of multiple CPU cores, batch processing for optimum resource scheduling, and the ability to chain processes together that require the output from one process as the input for another.

Fugro-Jason has released a new version of its reservoir characterization software. Fugro says one consideration in the new version is the fact that operators need a clear picture of a reservoir to make drilling decisions. The technology aims to present discipline-specific, critical information in a coherent subsurface representation.

The program has geostatistical reservoir characterization; wavelet estimation and well to seismic ties; and 2D and 3D seismic inversion.