The Society of Geophysicists planned a program to introduce high school students to the world of geosciences at its International Exposition and 85th Annual Meeting in New Orleans. 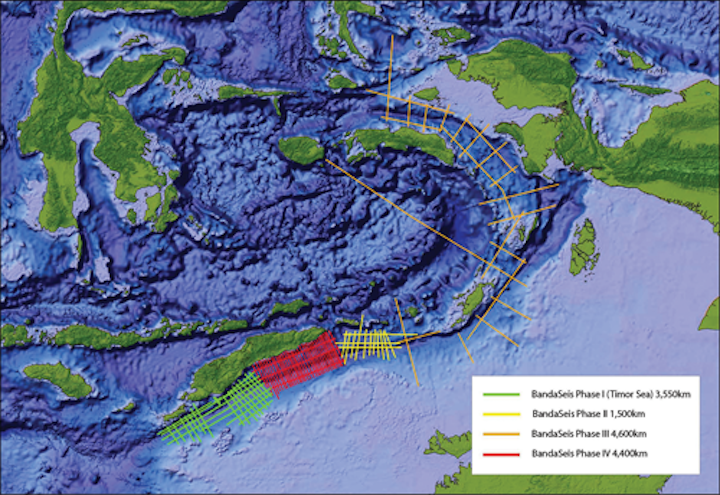 The Society of Geophysicists planned a program to introduce high school students to the world of geosciences at its International Exposition and 85th Annual Meeting in New Orleans. The program is directed at science, technology, engineering, and mathematics (STEM) students and hopes to influence students to meet the American Geosciences Institute projected shortage of 135,000 geoscientists by the end of the decade.

Geophysical and geotechnical surveys are continuing offshore Mexico in the GoM.PEMEXhas extended the ongoing campaign by Fugroand Diavaz. The operations are in support of exploratory drilling in the Bay of Campeche and deepwaters around Perdido. The ultra-deepwater geotechnical work fromFugro Synergy should be under way now, while the geoconsulting program will continue through 2016.

Exploration in northern waters is garnering attention. Thegovernment of Norwayhas a line item of NOK 173 million ($21.2 million) for seismic surveys that would target the Barents Sea. The spending is contained in the government’s 2016 budget proposal.

Tord Lien, minister of Petroleum and Energy, said the government believes there are substantial remaining resources of oil and gas in the Barents Sea, and that the survey will help to increase activity and employment in the north.

“Mapping of these areas is also important to highlight the presence in the north and to safeguard national interests,” he said.

Lundin Norwayhas consent to drill an exploration well on license 708 in the Barents Sea using the Transocean Arcticsemisubmersible. Drilling is scheduled to start this month and run for about two months, depending upon results.

Electromagnetic Geoservices has signed a multi-client acquisition agreement with the Directorate General of Hydrocarbons of India. The agreement gives EMGS a two-year permit to acquire 3D EM data in a 325,000 sq km (125,843 sq mi) area off western India. The area crosses eight tectonic provinces from Kutch-Saurashtra in the north to Ratnagiri in the south.

Ireland’s 2015 Atlantic Margin Licensing Round drew a record 43 applications. Minister of State for Natural Resources, Joe McHugh, said the response was the largest for any of the country’s offshore licensing rounds to date, with applicants ranging from small companies to majors. All the country’s main Atlantic basins - Porcupine, Goban Spur, Slyne, Erris, Donegal, and Rockall - were included. Successful bidders will be offered a two-year licensing option, to be granted under the Petroleum and Other Minerals Development Act, 1960.

Europa Oil & Gas, which applied for multiple blocks in this year’s round, plans to assume a 100% interest in, and operatorship of, licenses FEL 2/13 and FEL 3/13 in the Porcupine basin.

CGG has completed the processing on all four phases of data acquired in its BandaSeis 2D BroadSeis multi-client program around East Indonesia and Timor Leste. The program covered more than 14,000 km (8,700 mi) and was collected in cooperation with the Indonesian Directorate General of Oil and Gas (Migas) and the Timor Leste National Petroleum Authority.

Data was processed to prestack depth migration in CGG’s Singapore imaging center with the final of the four phases delivered in 2Q 2015. The results cover the Banda Arc in the active collision zone between the Australian continental plate and the Indonesian island arc system.

The PSDM volumes are expected to shed light on the Mesozoic sedimentary successions, including the deltaic and marginal marine Lower to Middle Jurassic Plover Formation (and correlative successions) which contains excellent reservoir-quality sandstones in the nearby Laminaria and Corallina fields (Bonaparte basin, Australia), together with the Abadi and Bintuni Bay gas fields of East Indonesia.

The BandaSeis 2D seismic data is being correlated with new, multi-pass satellite seep data from NPA Satellite Mapping to identify potential hydrocarbon migration pathways. A tectonic and structural interpretation should be completed by GeoConsulting by year-end.