Low oil prices have resulted in dramatic upstream investment cuts since 2014. As the supply of oil from sanctioned conventional projects dries up and legacy field decline rates accelerate, those cuts are likely to lead to a tighter oil market by 2020-21 and a supply gap of 13-16 MMb/d by 2030. The supply gap should encourage sanctioning of new deepwater projects thanks to recent cost compression trends in offshore. 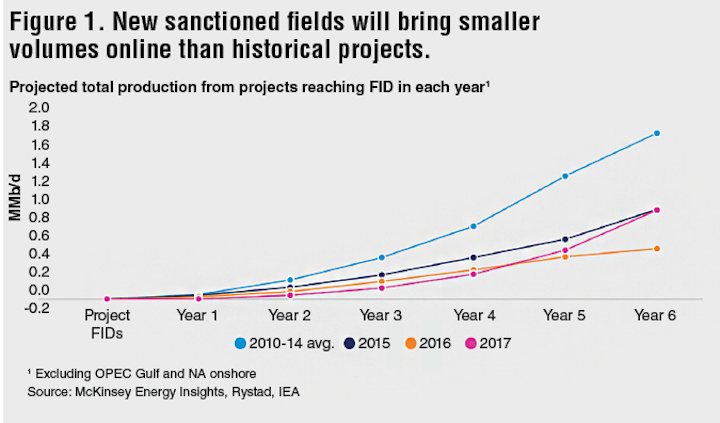 Low oil prices have resulted in dramatic upstream investment cuts since 2014. As the supply of oil from sanctioned conventional projects dries up and legacy field decline rates accelerate, those cuts are likely to lead to a tighter oil market by 2020-21 and a supply gap of 13-16 MMb/d by 2030. The supply gap should encourage sanctioning of new deepwater projects thanks to recent cost compression trends in offshore, resulting in an additional ~$654 billion of cumulative deepwater oil project expenditure until 2030.

Global upstream investment has suffered dramatic cuts in the recent low oil price environment. Upstream oil and gas capex was halved from ~$800 billion in 2014 to ~$400 billion in 2016, and global exploration and appraisal spending fell by 40% to $11.2 billion during the same period. These cuts have affected oil projects in two major ways: decline rates for producing assets have accelerated and new projects have been cancelled or delayed, with only half as many projects receiving investment decisions in 2016 as did in 2014.

Accelerating decline rates resulted in an additional 10% taken out of the market in the 2016-2021 period, compared to 2009-2014. The lack of investment has materialized in existing fields through reduced field maintenance spending and performance improvement capex. After a year of considerable maintenance investments in 2014, operators in most geographies chose to stop reinvesting into legacy fields as one of the necessary sacrifices to cut costs during the price downturn. These cuts are now starting to show, with legacy conventional output, excluding OPEC Gulf and US shale oil, falling by 4.0% per year since the price crash, compared to ~3.7% per year in 2009-14. 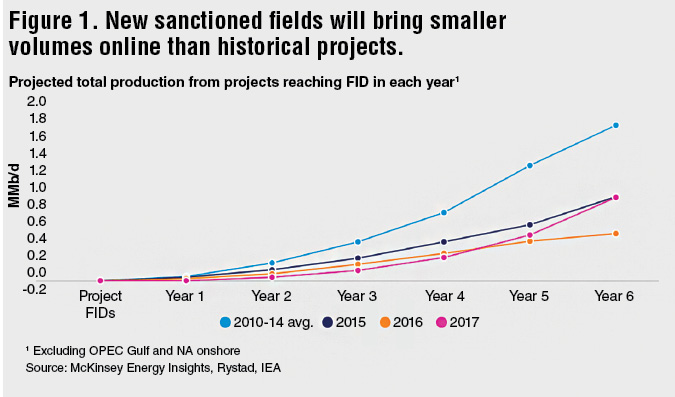 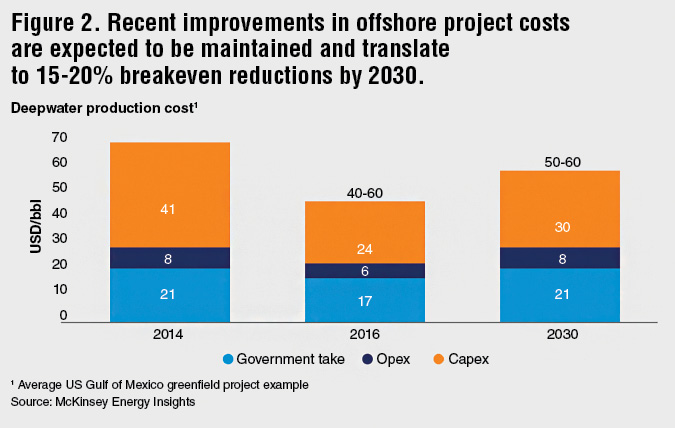 are expected to be maintained and translate to 15-20% breakeven reductions by 2030.">

While there are regional variations, decline rates acceleration is expected to continue in many traditional offshore hubs. In the UK North Sea, accelerating depletion rates at legacy fields are set to outpace growth from new fields that were sanctioned before the downturn by 2019. Depletion is also expected to accelerate in Brazil, where new projects have been delayed and most brownfield EOR contracts were cancelled at the end of 2015; and Venezuela, where global contractors have stopped reworks in all but the Orinoco belt.

Overall, global oil production (excl. OPEC Gulf and shale oil) is expected to decline at a 4.5% annual rate going forward, or 1.9 MMb/d per year, meaning that 9.4 MMb/d of supply will leave the market by 2021. Those million barrels are ~1 MMb/d higher than what the global oil stack declined by in the five years before the price collapse.

Spending cuts are expected to cause a 50-60% decrease in oil volumes coming online from new projects in the next three to five years, compared to the 2010-14 average. As with brownfield projects, the greenfield pipeline for the next few years has been significantly reduced due to the lack of investment since 2014, especially for shallow water developments. In fact, only half as many projects received final investment decisions (FIDs) in 2016 as did in 2014.

Deepwater was the only resource type where FIDs stayed relatively strong thanks to significant cost compression, as break-even levels came down by 30-40%. Projects like Mad Dog Phase 2 further lowered their break-evens by simplification of design and standardization, by using existing best practices; and making use of existing infrastructure (Mad Dog 2 used the design of the existing Atlantis platform). 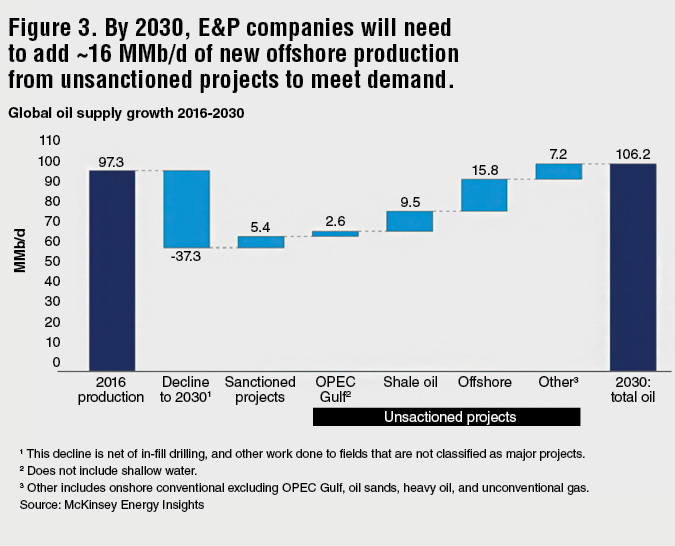 to add ~16 MMb/d of new offshore production from unsanctioned projects to meet demand.">

Global FID numbers, including onshore, have already started to recover. Yet excluding some major deepwater projects, what is currently in the immediate offshore pipeline is mainly smaller, lower-cost projects. As a result, the production volumes set to come online in the next two to three years are considerably lower than what we saw come online in 2014. Overall, we assume that investment cuts will result in 50-60% lower volumes coming online from new projects in the next three to five years, compared to the 2010-14 average. This is a problem for an industry that is already facing accelerated declines from existing fields.

The 13-16 MMb/d gap in supply by 2030 will create an opportunity for new cost-competitive deepwater projects. The reduced number of greenfield projects combined with higher decline rates likely means that the industry will be challenged in producing enough future oil from current approved projects to sufficiently meet rising demand.

Projects that reached FID before 2014 – including mega-projects such as Lula and Golden Eagle – will cover 60% of the anticipated supply gap in 2020-21, but projects approved since 2014 are not sufficient to cover the remaining 40%. If no new projects were sanctioned going forward, we would expect a supply gap of approximately 35 MMb/d to materialize by 2030.

The supply gap is unlikely to be fully offset by shale oil, OPEC, and other onshore production. US shale oil production is expected to grow to ~8 MMb/d by 2030 in our base case. Yet barring a considerable price increase, resource constraints in legacy plays and high declines (another 1.5 MMb/d of production will need to be replaced by 2030) will start restraining output beyond that level. Global shale is not yet economic enough to fill the gap. Similarly, OPEC output is likely to be capped by the group’s policy of output restraint and also affected by the region’s lingering political instability.

In our base case, OPEC will grow production only to maintain market share, with most of the new growth coming from Iran and Iraq, adding some 2.5 MMb/d over current OPEC production levels. Yet this is still not enough to fill in the supply gap. The rest of onshore production is expected to add 7.2 MMb/d, including production that needs to be replaced.

Consequently, over the next decade a gap of 15-16 MMb/d will remain, resulting in a market tightening that presents a considerable opportunity for offshore and especially lower-cost deepwater greenfield projects.

Cost compression has made offshore projects increasingly competitive since the downturn, and the gains are expected to be partly retained thanks to fundamental changes in the way operators approach projects. Drivers of reduced costs include greater standardization and modular design, higher use of existing facilities through tiebacks, as well as better coordination between operators and suppliers. Lower personnel costs and rig rates are also expected to last for some time, and single source service suppliers should help keep costs down.

The use of newer and more powerful rigs further helps improve project economics, as do more competitive fiscal terms from governments that seek to encourage faltering development; a good example of favorable government policy includes the most recent UK Budget revision toward transferable tax credits at the time of a field sale.

As a result of cost compression, deepwater breakeven levels are likely to continue being 20-25% lower than 2014, despite a situation where oil prices increase to $70/bbl in our base case. The wider margin created by lower costs should place deepwater investments firmly at the left side of the global oil cost curve, making these projects viable to close the supply gap.

Incremental new deepwater production from pre-FID projects could thus reach 10.4 MMb/d by 2030, which along with increased shallow water will be sufficient to meet the estimated 15-16 MMb/d required to meet demand and replace the declines in existing offshore fields. In order to achieve this level of deepwater growth, the industry would need to invest $654 billion in cumulative capex for unsanctioned projects by 2030. While this capex will likely be distributed among the world’s deepwater basins, it is expected that a significant portion will continue to be invested in projects in Brazil’s presalt (~25%) and the US Gulf of Mexico (~15%), thanks to their favorable economic and investment-friendly conditions.

Even if only a conservative portion of this investment potential materializes, the low oil prices we have experienced over the past two years could therefore trigger a new wave of deepwater investment by 2030.