Global high-impact exploration in 2017 should match 2016 in terms of activity and success rates, according to Westwood Global Energy Group. 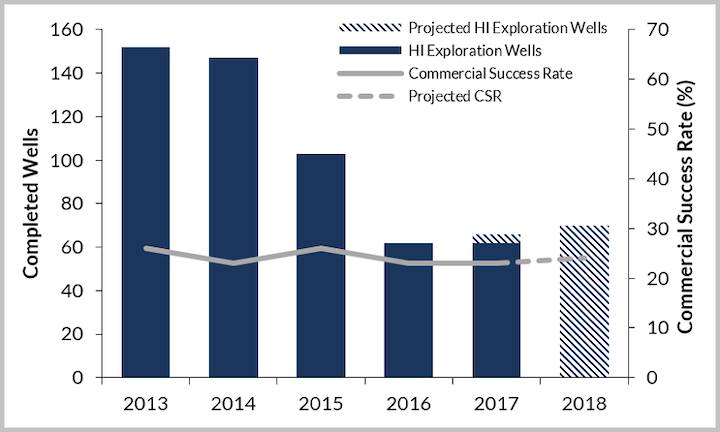 LONDON – Global high-impact exploration in 2017 should match 2016 in terms of activity and success rates, according to Westwood Global Energy Group.

However, there should be a strong improvement in commercial oil volumes discovered and lower finding costs.

The consultant says success rates from high-impact drilling have stayed constant at around the 1 in 4 level over the past five years, but in 2017 resources discovered per high impact well were 104 MMboe, up from 71 MMboe in 2016.

This, coupled with lower average costs of $48 million per well, led to finding costs below $0.50/bbl, the lowest since 2011.

Next year, Westwood expects more than 70 high-impact exploration wells to be drilled over more than 40 basins, with around 35% of the wells targeting frontier plays.

Hot spots for gas exploration will likely be the MSGBC and Nile Delta, and oil in the Suriname-Guyana basins.