While planning for an offshore Norwegian exploratory well, surface pressure of nearly 15,000 psi and extremely high temperatures were anticipated 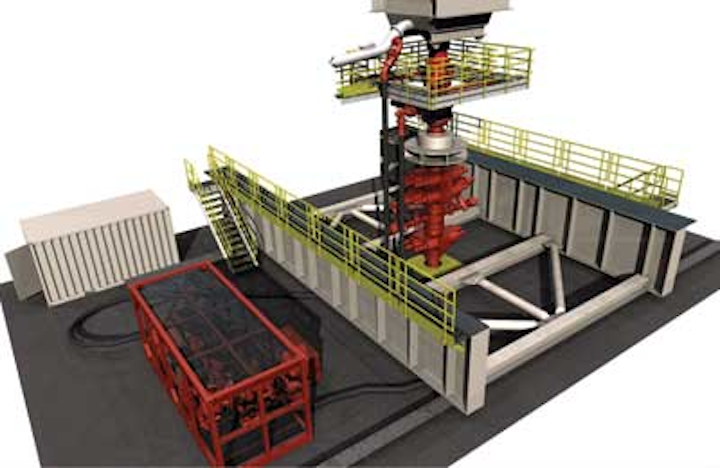 While planning for an offshore Norwegian exploratory well, surface pressure of nearly 15,000 psi and extremely high temperatures were anticipated.

To understand and control wellbore dynamics while maintaining an overbalanced wellbore, the operator installed a managed pressure drilling (MPD) system to provide early kick detection and to allow for wellbore breathing mitigation.

A key objective of using MPD was to set the 9 7/8-in. production-casing shoe as close to the reservoir as possible to allow the optimal 8 ½-in. section to be drilled to total depth (TD) within a very narrow, 0.4 ppg drilling window. A significant challenge was presented with well breathing events in the difficult wellbore environment, which made pore pressure evaluation and kick detection critical to drilling the well.

The operator selected Weatherford's automated MPD system to mitigate the drilling hazards, which allowed the entire 8 ½-in. section to be drilled to 5,933 m (19,465 ft) TD. The system saved the client an estimated $7.5 million and 10 days of rig time while reducing risk and improving safety. Weighting up the mud system and controlling gas influxes accounted for approximately five of those saved days.

Existing MPD procedures could not be directly applied to the well, and the extreme HP/HT environment prompted a cautious approach.

A project team formed by the operator and MPD personnel was established roughly four months ahead of the spud date. A rig survey determined that some major rig modifications were required, because the area between the rig's annular preventer and the diverter could not accommodate the rotating control device (RCD). As a result, the riser had to be nippled down in the yard and a new, shorter overshot mandrel and packer assembly were manufactured to provide the necessary space between the annular and the diverter.

Underbalanced drilling techniques could not be applied at any stage and surface backpressure would only be applied if an influx was detected. It was necessary to include the MPD procedures in the conventional HP/HT procedures and establish guidelines for the use of MPD and conventional rig equipment. Several workshops and HP/HT training sessions were conducted for rig and MPD personnel.

A full suite of integrated procedures and decision trees were prepared. It was decided that any kicks above 1 bbl would be handled by the standard rig equipment due to a risk of taking a secondary kick if a kick greater than 1 bbl was circulated undetected to the surface.

Two rig surveys were conducted to determine where the MPD equipment would be placed. Due to limitations on variable deck load, space, and overshot mandrel modifications, none of the MPD equipment could be rigged up before the intermediate 13 5/8-in. casing had been run and cemented in place. Norwegian regulations also specified that electric cabling on the rig be upgraded to Norsok standards. A total of 2 km (1.25 mi) of new cables had to be installed before the equipment could be installed.

The MPD equipment package featured an MPD manifold unit that included computer-controlled chokes, Coriolis flow meters, and an intelligent control unit. A passive, self-lubricating, large-bore RCD (able to handle pipe up to 6 5/8-in. OD) was connected to the BOP annular. A removable bearing assembly for the RCD allowed for an 18.69-in. ID when the bearing was removed. The RCD model that was used is the first certified to API 16D specification. Its pressure rating is 2,000 psi static and 500 psi at 200 rpm.

The equipment package also included various MPD sensors in the MPD flowlines and mud pits. Hard and flexible piping was used to connect the MPD equipment to the RCD, the rig's choke manifold, the trip tank, and the rig's poor-boy degasser.

A top flange tied the RCD back to the rig's bell nipple. This equipment was rigged up prior to drilling out of the 13 5/8-in. casing.

Prior to drilling, an extensive flushing, pressure testing and fingerprinting program was conducted. The MPD system was engaged from the bottom 600 m (1.968 ft) of the 12 ¼-in. hole to acquaint crews with new procedures and equipment in advance of the lower, more difficult section.

Surface backpressure (SBP) was added in 100-psi increments until the gas flow stopped. The flow and density parameters stabilized at 350 psi SBP, indicating a pore pressure of 18.5-18.6 ppg. To verify an underbalanced state, the MPD choke was opened briefly, and conditions were confirmed.

The bit was held stationary at 5,562 m (18,248 ft) and the mud weight was increased from 17.5 ppg to 18.0 ppg in one circulation cycle to slowly reduce the SBP on the MPD system to an equivalent 18.6-ppg dynamic mud weight. To confirm that formation integrity had not changed at the casing shoe (19.5 ppg), the MPD equipment was used to perform an open hole leak-off test.

The 19.1 ppg test figure indicated the pore-pressure/fracture gradient window had been reduced to only 0.5 ppg. Mud weight was ramped up to 18.2, 18.3, 18.4, and 18.6 ppg to carefully maintain a bottomhole circulating pressure less than 19.0 ppg, ensuring a 0.1 ppg safety margin.

Keeping ECD below 19.0 ppg required the flow rate be maintained below 200 gallons per minute (gpm) for the remainder of the well. Small losses were experienced through the sandy intervals.

After the gas incident had been resolved, confidence in the system increased, and it was decided to apply SBP on connection in order to reduce wellbore breathing and the time required to circulate the gas out of the hole. The available pressure window did not allow for a trip margin when pulling the BHA for bit changes and coring.

Swabbing the well was avoided by stripping out the pipe through the RCD with a backpressure equivalent to 19.0 ppg from TD to approximately 1,400 m (4.593 ft) inside the production casing. A heavy, 20.0-ppg mud cap pill was placed at 4,000 m (13.123 ft) to give the necessary trip margin for the remainder of the trip. When tripping back in it was discovered that the pill had not strung out much in the wellbore and had to be circulated out in steps carefully to avoid losses. Although some losses were experienced, they decreased toward the bottom of the pill and completely stopped once the pill was out of the hole.

Extensive use of the MPD system and the application of new techniques for tripping enabled the 8 ½-in. hole to reach TD at 5,932 m (19,463 ft) in 8 to 10 days sooner than offset wells where an intermediate liner was required. The 8 ½-in. hole size benefited wireline logging, coring, fishing operations and DST testing compared to carrying out the same operations in a 6 or 5 5/8-in. hole. The MPD stripping technique was much faster than the standard process. It is estimated that a minimum of 12 hours were saved on every trip using the technique.

The MPD operations were also used in the P&A phase of the well. With a solid float in the cement string, the MPD system held approximately 50 psi backpressure on the plugs when pulling out of the cement. In addition, the 2,000 psi static pressure rating of the MPD equipment allowed its use to pressure test the cement plugs after tagging, which was significantly faster than rigging up to the cement unit for testing.

Using MPD and sophisticated flow detection equipment allowed the well to be safely drilled to TD in an 8-½ in. hole with a 0.4 ppg pressure window. Doing so added significant value to the formation evaluation program and with the DST.

The MPD system accurately determined the pore pressure in the well without the need for any wireline tools, and this included a sudden rise in pore pressure from 17.5 to 18.6 ppg. Locking in the ECD pressure during connections in a controlled and safe way eliminated all extra circulation time resulting from gas from wellbore breathing during connections.

It was shown that MPD procedures can be tailored for the application and can be used to save time and cost without placing the wellbore in an underbalanced state. Using MPD controlled stripping techniques can eliminate the need for the conventional "pump out to the shoe" check trip.

Using MPD led to operational and economic advantages. In total, using the MPD system saved 18.5 days or about $13.9 million. MPD rig-up and testing the net savings was 10 days ($7.5 million).

Four days, or about $3 million, was saved compared to a conventional set up when controlling gas influxes, determining the pore pressure and enabling controlled weighting up. About 10 days ($7.5 million) were saved by successfully drilling the 8 ½-in. hole to TD in the narrow pore pressure/fracture gradient margin.

The elimination of gas check trips when pulling out for bit changes and coring saved two days ($1.5 million). The MPD system allowed stripping out with backpressure to control swabbing.

Other benefits included saving two days, because no dummy connections were required; and another half day which would have involved conducting open hole LOTs and pressure tests of cement plugs with the MPD equipment.

Significant time savings were achieved by locking in the ECD pressure during connections, which eliminated long circulation periods following the connections. However, this is difficult to quantify and has not been included in the time calculation. Lastly, a total of eight and a half days were spent on rigging up, flushing, pressure testing, and fingerprinting the well

Moving to a closed loop, managed pressure drilling system provided the data and control to drill within a very narrow window in this extreme HP/HT well and still maintain an overbalanced mud weight throughout the operation. Understanding pore pressure and well dynamics provided information for correct decisions to be made and for an automated control system using annular backpressure to effectively manage small influxes and losses. This capability allowed the well to reach TD expediently with the optimal hole diameter.