Non-retrievable drilling-with-casing (DwC) systems are being used in harder formations and over longer intervals with much less drill-out, milling, and cleanout based on recent developments in drillable bit technology. 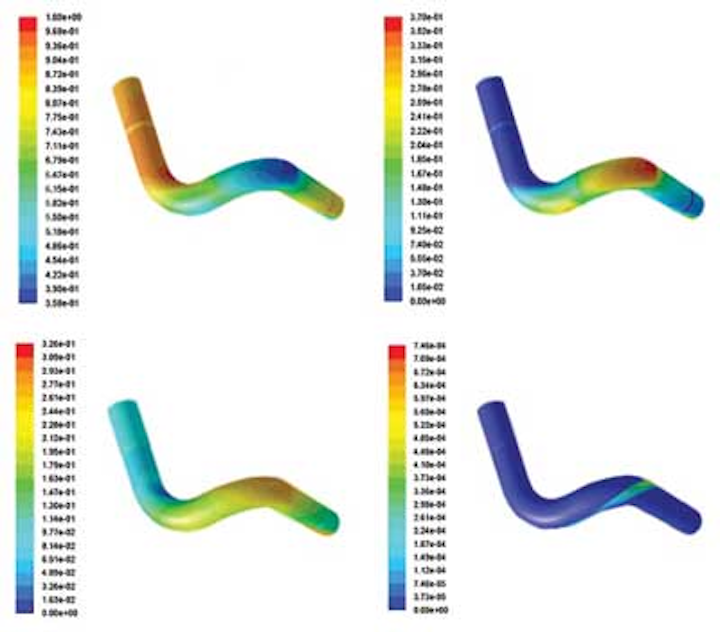 Non-retrievable drilling-with-casing (DwC) systems are being used in harder formations and over longer intervals with much less drill-out, milling, and cleanout based on recent developments in drillable bit technology.

The enhanced performance is achieved with a new bit series that uses PDC cutting elements mounted on aluminum nose and blade supports. The design provides a premium cutting structure comparable with conventional PDC bits while reducing steel in the drill path by 80%.

This steel reduction allows the DwC bit to be drilled out of the set casing without significant damage to the conventional PDC bit. The result is a long-sought balance between durability and drillability.

In drilling operations from Asia/Pacific to the US Gulf of Mexico, the technology is enhancing performance in harder formations and over longer runs while reducing costs typically incurred when drilling out DwC bits.

Casing drilling is an effective means of mitigating hole stability and lost circulation problems in many parts of the world. That popularity got its start in the Asia/Pacific region where softer rock strength and high rig rates make it a cost-effective technology.

But in other parts of the world, operators are faced with drilling hazards in harder or more abrasive formations. The selection of DwC bits has been limited in these tougher applications.

This issue has been a critical constraint for DwC methods that cement the casing bit in place and subsequently drill it out and drill ahead with a conventional bit. The challenge has been to build a more durable bit that can be easily drilled out without damaging the polycrystalline diamond compact (PDC) cutting structure of the drill-out bit. Striking this difficult balance has required tradeoffs between drilling performance and the costs of drill out, milling, and hole clean out.

The move to PDC

It is critical that a casing bit be capable of drilling to the target depth. The cost of pulling the entire casing string to replace a worn DwC bit would negate many of the benefits of simultaneously drilling and casing the well.

However, the time and costs associated with drill-out are also important considerations. Early casing bits were designed for easy drill out with an aluminum base and a cutting structure comprised of either a tungsten carbide coating or small diameter thermally stable diamond (TSD) inserts.

These bits types are still widely used in many soft-formation applications in the Asia/Pacific region. Their use is generally limited to formation strengths of less than 7,000 psi unconfined compressive strength (UCS), equivalent to about 100 μs/ft on the sonic log.

As casing seats were pushed deeper into more competent formations, the softer-rock bits reached their operational limits. Drilling longer intervals in harder formations required a more durable cutting structure. As a result, a number of bits with PDC cutters were developed for formations in the range of 15,000 psi UCS.

The smaller, conventional bit used for drill-out must not sustain significant damage that would compromise continued drilling. A damaged drill-out bit can reduce ROP in the next hole section, or may have to be tripped and replaced.

Damage to the drill-out bit is a particular issue when using a conventional PDC casing bit. In addition to the problematic brittleness of PDC cutters, damage can occur when the cutters chemically react with the iron at high temperatures and revert to graphite.

Both designs have limitations. Aluminum DwC bits, which displace the cutting structure by pressuring up on a dropped ball and leave only an aluminum plug to be drilled out, are complex, expensive, and limited to formations under 15,000 psi UCS.

Steel alloy DwC bits are fundamentally a conventional steel-bodied bit design modified to be somewhat drillable. These bits depend on the strength of the steel to reduce the amount required in the drill-out path. Because they are single-piece steel alloy bodies with no moving parts they are easy to manufacture. But they still have a significant amount of steel in the drill-out path.

Two bits in one

Significant drill-out improvements have been achieved with a new Weatherford DwC bit design that combines the durability of a full PDC cutting structure with the drillability of an aluminum nose and blade supports. The Defyer DPA drillable casing bit design can be quickly drilled out with any conventional PDC or roller cone bit. It is relatively simple with no moving parts, and a ball drop is not needed because the cutting structure is not displaceable.

The Defyer DPA has drilled in Malaysia, Oman, Russia, Colombia, and Argentina in various formation types and compressive strengths with an average recorded drill-out time of less than 20 min compared to steel alloy drill-out times of 125 min.

The design features a full PDC cutting structure brazed to steel rails (one rail for each blade of the bit). The rails retain the PDC cutters during drilling while minimizing the amount of steel in the drill-out path.

By mechanically locking the steel rails and PDC cutters to aluminum blades, the DPA design achieves the rigid support structure needed for drilling in hard formations without hindering the drill-out process. Because the nose and blades are a drillable aluminum alloy, only a small amount of steel is in the drill-out path. As a result, the new bit can be easily drilled out with any conventional PDC or roller cone bit.

Laboratory and field testing has shown good ROP and minimal damage to the PDC cutting structure of the drill-out bit after drilling through the subject casing bit.

A drill-out test was conducted from a test rig to evaluate performance of a 13 3/8 x 16-in. prototype bit with four blades and 16-mm (0.63-in.) PDC cutting structure and using a conventional PDC bit. The unworn DPA prototype was drilled out in 15 min without significant damage to the drill-out bit.

Successful testing led to field trials in Malaysia where the operator had extensive DwC experience with steel alloy casing bits. In these applications, the PDC drill-out bits exhibited severe wear after drilling through the DwC bit and the following interval of medium soft formations inter-bedded with hard stringers.

Drilling out the shoe track, steel alloy casing bit, and new formation typically required one PDC bit per trip. An easier, less-damaging drill out was sought.

The DwC bit took only 12 min to drill out. Aluminum and steel shavings from the casing bit were collected from the shale shakers but no PDC cutters were found. It is suspected that the PDC cutters from the drillable bit were either pushed into the borehole wall or were fractured into smaller pieces and circulated to surface.

An early deployment of the DPA bit was for an operator drilling off the coast of Australia. Weatherford was asked to develop a drilling solution that would reduce NPT by overcoming reactive shales, lost circulation, and borehole instability over a 2,600 ft (795 m) interval below the 20-in. conductor. The selected solution also had to help the operator avoid the need for a conventional bottomhole assembly trip from total depth.

Following a detailed analysis of the top-hole formations and offset drilling data, a DwC system was recommended that employed 13 3/8-in., 68-lb/ft casing, a casing bit to help ensure that total depth was reached at a high ROP, a 500-ton casing running system, flush-mounted slips, torque rings, and large-bore float collars.

The operator deployed this system and successfully mitigated all top-hole-formation related issues while achieving an average ROP of 285.1 ft/hr (86.9 m/hr). The deployment was a record setter for interval length using DwC methods, and saved the operator approximately 24 hours rig time, or about $600,000.

Weatherford recommended the 9 5/8 x 10 5/8-in. Defyer DPA 4413 drillable casing bit to run on the liner in order to ream through the trouble interval as well as to navigate by the MWD fish. The DPA casing bit enabled the liner system to reach the planned setting depth in conditions that would likely have been impossible using conventional liner running techniques.

Once the liner was set, the shoe track and DPA bit were drilled out with an 8 1/2-in. tricone bit (IADC 1-1-7) to formation integrity test depth and pulled out of hole in good condition.

The long-sought balance between durability and drillability in DwC bits is being achieved with a new design that combines a full PDC cutting structure with an aluminum nose and blade supports. As a result, the innovative Defyer DPA bit series is extending DwC hazard mitigation capabilities to harder rock and longer intervals while significantly cutting the drill-out times compared to steel alloy drillable bits.