Subsalt oil and gas plays, which are found in major offshore basins from the Gulf of Mexico (GoM) and West Africa to Brazil and the North Sea, promise vast production potential but also present unique technical challenges. 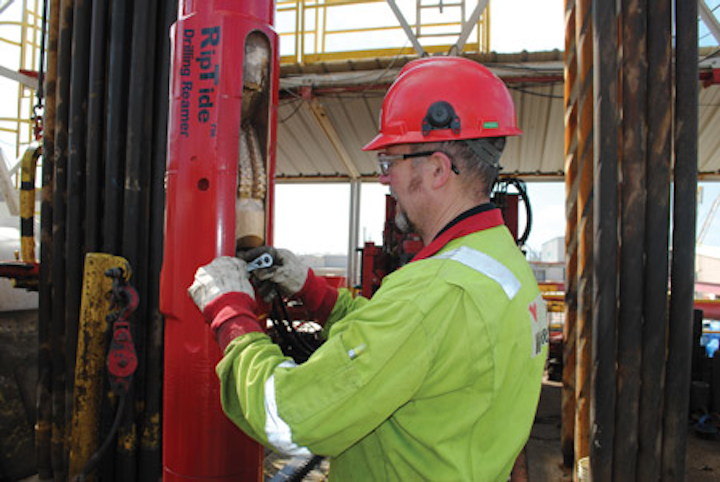 Subsalt oil and gas plays, which are found in major offshore basins from the Gulf of Mexico (GoM) and West Africa to Brazil and the North Sea, promise vast production potential but also present unique technical challenges. These include well depths in excess of 30,000 ft (9,144 m), well control problems attributed to rapidly changing pressure regimes, and vibrations while drilling through salt that threaten the structural integrity of the bottomhole assembly (BHA) and drillstring. Salt formations can be unpredictable and often contain inclusions that are not easily detected by seismic technology, which can lead to kicks and well control events.

Wellbore instability is a particular concern during underreaming operations, in which the newly drilled wellbore is enlarged to facilitate casing running, cementing and other completion operations, as well as to clean out the rathole. The time required to clean out the rathole, during which the open hole section is exposed, increases the risk of well control incidents.

Hole enlargement-while-drilling (HEWD) operations are frequently performed in deepwater wells to minimize wellbore instability risks and to help ensure that the casing or liner reaches target depth (TD). The conventional BHA configuration for these applications positions the underreamer above both the rotary steerable system (RSS) and measurement-while-drilling/logging-while-drilling (MWD/LWD) tools in the drillstring to enable unrestricted communication between the systems and to facilitate directional drilling. The underreamer is then activated by conventional methods (i.e., pumping darts or balls to the tool) or by radio frequency identification (RFID) tags, which is the most recent technology.

This arrangement leaves a rathole at the bottom of 200 ft (61 m) or more, which typically requires a second BHA trip with an underreamer to clean out and enlarge the hole. The second trip ensures that the casing can be set closer to TD and the shoe can be cemented effectively. However, it adds days of rig time to the operation, requires the rig crew to conduct additional tool handling on the rig floor, and increases the time that the borehole is exposed.

Getting closer to the bit

An alternative deployment places two underreamers in the drillstring, which eliminates a second trip and reduces rig time and openhole exposure. The primary underreamer, which can be activated by RFID tags, is positioned above the measurement tools and RSS to enlarge most of the wellbore during drilling. Once the bit reaches TD, the primary underreamer is deactivated and a secondary rathole reamer, located below the measurement tools and above the RSS, is then also activated via RFID tags or pressure command, depending on the configuration of the MWD/LWD systems. The rathole reamer enlarges the majority of the remaining rathole.

While the dual underreamer deployment strategy has proven successful, operator demands for improving the HEWD efficiency have prompted design evolutions. Weatherford has answered this need with the development of the RipTide Rathole Killer, an intelligent wired system with only one reamer in the drillstring that serves as both the primary underreamer during drilling and as the rathole underreamer. Positioned near the bit-above the RSS and below the MWD tools-the intelligent wired reamer allows the operator to steer the well and underream at the same time to significantly reduce the size of the rathole.

The system can be activated via RFID, or if turbine-powered MWD/LWD systems are used, via pressure command activation. The improved BHA design minimizes the length of the rathole, which eliminates the need for a dedicated trip and enables immediate casing running for minimal open hole exposure time.

Minimizing a Gulf of Mexico rathole

On a previous well in the same area, the operator had encountered a kick in the salt section while using a conventional underreaming tool to drill to the casing point, which was 500 ft (152 m) into the top of the salt formation. The nature of the kick was related to a fracture in the formation and resulted in operational setbacks that included setting a 16-in. shoe in a shallower spot than planned.

Given these setbacks in the previous well, the operator worked with Weatherford to develop a suitable wired underreamer solution, which required a six-month period of pre-job planning and lab testing between the two companies. Testing involved multiple simulations to ensure the underreamer, MWD tools, and RSS could work in concert with no loss of connectivity.

This work pointed to a wired, RFID-activated rathole underreamer as the best option to enlarge the hole section and minimize the rathole. This marked the first time an underreamer would be wired and activated below MWD and LWD restrictions, and used to simultaneously drill and enlarge a hole.

This wired RipTide Rathole Killer was the only reamer in each of the BHAs to enlarge the respective hole sections. Use of a single underreamer placed below the MWD/LWD package was possible because the logging tools were capable of detection in the underreamed hole, thus eliminating the need for a second reamer and creating a more efficient BHA.

The critical section for enlargement and cleanout was the 16½-in. x 20-in. 3,500-ft (1,067-m) interval that also required real-time directional communication and steering. A 16-in. liner shoe was to be set approximately 500 ft (152 m) below the top of the salt formation, with less than a 40-ft (12-m) rathole. This undertaking involved precisely intersecting the salt formation at a 29.5° inclination.

The on-demand activated RipTide Rathole Killer proved beneficial to well operations in this section, because it had to be opened and closed three times due to changing wellbore conditions. The underreamer was first opened outside the shoe and in open hole to begin HEWD operations. After approximately 200 ft (61 m) outside of the shoe, the rate of penetration decreased dramatically, indicating that the bit had become balled or clogged with debris. The reamer was closed via RFID tags, and inspection confirmed that the bit was blocked with residue from the float equipment. With the underreamer still closed, the driller applied more weight on bit to break the blockage. The underreamer was then re-opened via RFID tags and HEWD continued.

Once the top of salt had been reached, the drillstring became stuck in the salt. The underreamer was closed again before commencing jarring operations to free the drillstring. After jarring the string for several hours with no success, the operator pumped several barrels of seawater to dissolve the salt around the drill pipe, which helped free it.

The underreamer was then re-opened by pumping additional RFID tags downhole. The HEWD operation continued without further delay or obstructions, allowing the last few hundred feet of hole to be drilled and enlarged to TD. Once TD was reached, the underreamer was closed a final time and pulled out of hole.

The ability of the intelligent reamer to record data such as vibration, pressure, and tool position allowed the operator and the service company to confirm the number of cycles the tool completed downhole. This ensured that a full-gauge hole was achieved before running the liner.

The intelligent wired reamer proved that it is possible to wire a reamer below MWD/LWD tools and maintain connectivity to the directional tools throughout the entire interval. The near-bit placement of the reamer did not interfere with the RSS as it built angle up to 29.5° inclination.

This BHA design provided a full-gauge borehole at a minimum depth of 500 ft into the salt section while eliminating the rathole to 37 ft. Four days of rig time and approximately $4 million of costs were saved, and both the 18-in. and 16-in. liners were installed without incident. •