Exploratory wells in ultra-deepwater hold great promise, but are inherently risky and expensive. 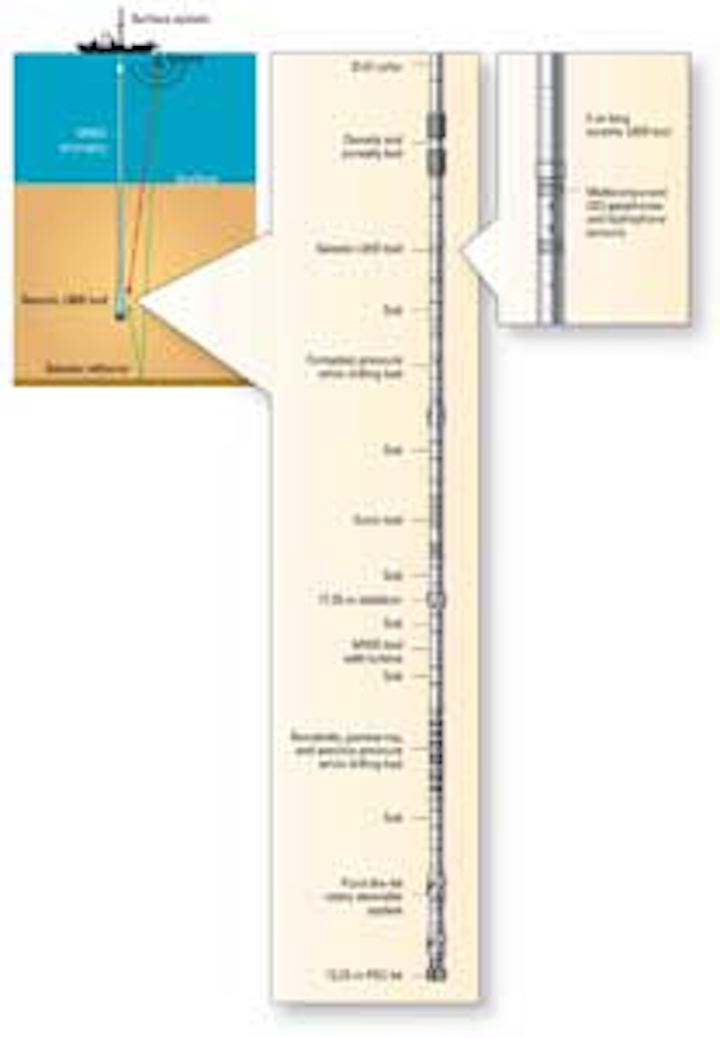 Exploratory wells in ultra-deepwater hold great promise, but are inherently risky and expensive. Complex, uncertaingeology in often-remote areas with little or no exploration history or data present a host of unknowns that push the limits of conventional technology. As activity continues to ramp up in this new frontier, E&P companies are looking to expand the scope of existing tools and expertise to plan and develop the most difficult wildcat wells, achieving what, until now, has been unachievable.

Ultra-deepwater wildcat wells present the greatest challenges to the oil and gas industry today, due to lack of offset well data and limitations of surface seismic data that compromise precise decision-making. For this high-stakes environment, operators must be able to accurately calibrate the seismic and pore pressure models used extensively in exploration drilling to evaluate multiple reservoir targets, drill on budget, and drill safely.

High-techlogging-while-drilling (LWD) services have widened the operational envelope for exploratory drilling in ultra-deepwater, delivering both real-time, time-depth-velocity data, and formation pressures to address the fundamental challenges of depth and pore pressure uncertainty. Seismic LWD measures the velocity, or speed of sound, between the sea surface and the downhole tool behind the drill bit. The velocity measurement, or seismic checkshot, is repeated as the well is deepened, allowing the operator to acquire velocity data as the well is being drilled and more definitively calculate the depth of approaching formation tops. Formation pressure-while-drilling (FPWD) is able to directly measure formation pressure.

The Schlumberger seismicVISION seismic-while-drilling (SWD) service used real-time measurements to update the velocity model in a wildcat well off the coast ofWest Africa and enabled the well target objectives to be achieved with confidence while reducing risk and time to drill the well. In one well section with a challenging mud weight window (MWW), SWD was used alongside the Schlumberger StethoScope FPWD service to more accurately calibrate the pre-drill pore pressure model. The acquired formation pressures, coupled with while-drilling petrophysical data, facilitated calibration of a velocity-to-pore-pressure transform and normal compaction trend lines, providing reduced uncertainty in the pore pressure model.

Development of look-ahead SWD technology for drilling challenging exploratory wells and planning development wells is rooted in the need to better understand the subsurface. Traditionally, industry has relied on surface seismic data to assess the potential location of a reservoir by using a reflection seismic image to measure reflections in time and estimate the velocity of the rock at different depths. However, without reliable offset well data to calibrate the formation, velocity depths are inherently uncertain.

Over the years, several "while-drilling" methods have been introduced to determine where the bit is on the seismic map before reaching the next casing point. These methods use indirect measurements and observations, and rely on multi-disciplinary petrotechnical expertise for data correlation between surface seismic, basin modeling, LWD petrophysical logs, synthetic seismogram, mud logging, and biostratigraphy—the study of microfossils to determine the geologic age of the rock.

The success of these techniques to place the bit on seismic is limited, because they depend on the accuracy of the assumptions used, continuous quality real-time logs, and/or models developed from seismic interpretation.

SWD addresses that deficiency by providing a direct time-depth conversion. During the drilling process, guns are fired to measure the time for the sound to travel from the surface to the downhole tools, enabling the operator to determine well depth with more certainty relative to formation tops ahead. This more accurate depth measurement saves time, minimizes risk and enhances safety, and potentially can reduce hole size and the number of casings required.

In acquiring the time-depth data for exploration wells, the SWD technique improves efficiency by using an LWD tool in the bottomhole assembly (BHA), rather than conventional wireline, to run seismic tools while drilling. Whereas most wireline tools can be run in combination in the hole, seismic tools are sometimes deployed in a dedicated logging run.

Using an LWD tool involves little or no additional rig time. Seismic sensors in the LWD tools consist of geophones, which respond to the physical motion of the wellbore, and hydrophones, which provide a more robust measurement by responding to pressure waves. Real-time seismic measurements also have been used in development wells for highly deviated well landing. A seismic reflector reflects the sound off the top of the reservoir to build an image of the reservoir location below the tool to more accurately place the well.

The service was used during the drilling operation of the Tapir South well, located in a remote region with limited exploratory activity in water depth of more than 2,100 m (6,890 ft). The nearest offset wells were more than 100 km (62 mi) to the north and south, and the onshore base and supply port was located more than 600 km (373 mi) away.

With rig spread rates exceeding $1 million per day, attention to detail was essential in every phase of the remote operation, including pre-job and logistical planning, offset evaluation, risk mitigation, and contingency measures. Because offset well data were extremely limited, with no nearby wells, a key challenge was to reduce depth uncertainty in pre-drill models to make accurate drilling decisions in the 17.5-in. and 12.25-in. sections of the well. By reducing depth uncertainty, Chariot Oil & Gas was able to update the formation depths in the pore pressure model during drilling and thereby avoid drilling into potentially high-pressure areas.

The pre-job planning phase involved assessing how to efficiently apply the technologies, minimize risk and non-productive time (NPT), and ensure a clear process for the operation. A decision tree was used to give the rig team autonomy to make drilling optimization decisions, such as when to stop and take a pretest. Planning for the SWD involved deciding where to acquire the data and ensuring that the data would be reliably available. Plans for all three sections included memory and real-time data acquisition at connections from the mudline down to TD of the 12.25-in. section.

The exploration model began with the surface seismic data, which was analyzed and interpreted to form a complex model upon which other models could be developed to provide a framework for designing the well. The pre-drill velocity analysis derived from surface seismic data showed the first reservoir target had depth uncertainty of +/-150 m (492 ft). The model also indicated that 133⁄8-in. casing needed to be placed just above the first target to optimize the mud weight and limit the number of casing sections required for the remainder of the well.

The depth uncertainty posed an additional problem due to the need for an S-shape trajectory. This was required to avoid a seismic anomaly, indicating a shallow drilling hazard, and to enable the well to penetrate several amplitude variations with offset (AVO) responses laterally offset on different horizons that could indicate hydrocarbons. Deviated wells pose the risk of missing the target if the anticipated target depth is not correct. If the target depth is shallower than expected, the wellbore will go under the target. If depth is deeper than expected, the wellbore will go over the top. In this case, it was important that the depth of the kick-off point from vertical be as accurate as possible to maintain a smooth section and avoid side tracks.

For the 26-in. hole section, the plan was to drill without a riser and acquire data when pulling out of the hole after jetting in the 36-in. conductor and drilling to section TD. After reaching the 20-in. casing point, the operator took several days to run the blowout preventer, riser, and casing. During this time, the onshore SWD team processed the high-quality seismic data in memory acquired from section TD up to 700 m (2,297 ft) above the seabed.

This produced a good-quality VSP and revealed a 4-ms time shift between the VSP and surface seismic images. Checkshot data revealed that the shallow velocity was slower than expected, making the expected target depths shallower. The well trajectory was revised accordingly and predicted depth of the first target was continually updated as subsequent sections were drilled.

While drilling the 17.5-in. and 12.25-in sections, real-time checkshot data was used to continuously calibrate the velocity model, place the bit on the seismic section, and repeatedly predict the depth of reservoir targets ahead of the bit. The checkshot data ensured the reservoir was not accidentally penetrated, since it was shallower than the pre-drill model prediction. This enabled Chariot Oil & Gas to drill the 17.5-in. section to within 20 m (66 ft) of the first reservoir target as planned.

The 12.25-in. section intersected several 2D targets, with seismic data acquired at each drilling connection. Because the casing shoe was placed close to the first target formation, it allowed the MWW to be optimized. For this section the pre-drill pore pressure model exhibited four different pore pressure models, with a disparity of up to 1.8 pounds per gallon (ppg). The StethoScope formation pressure-while-drilling service was deployed to calibrate in real time the best pore pressure model for optimizing the MWW and casing placement to minimize kicks and drilling delays.

For this complex ultra-deepwater well, the use of SWD service to calibrate a real-time velocity model enabled Chariot Oil & Gas to overcome several major challenges related to depth uncertainty. With the integrated approach of using SWD and FPWD in the 12.25-in. section, the operator adjusted the well path while drilling and penetrated the key targets, eliminating a 9.625-in. casing string and 8.5-in. hole section, which would otherwise have been needed as the measurements gave assurance that kick tolerance and safe overbalance were maintained at a safe level.

As operators continue to explore ultra-deepwater fields in remote regions with unknown geological hazards, tools that deliver critical model calibration information such as SWD and FPWD assist in meeting well objectives and are essential for achieving efficiency, reducing costs and time, and mitigating risk.