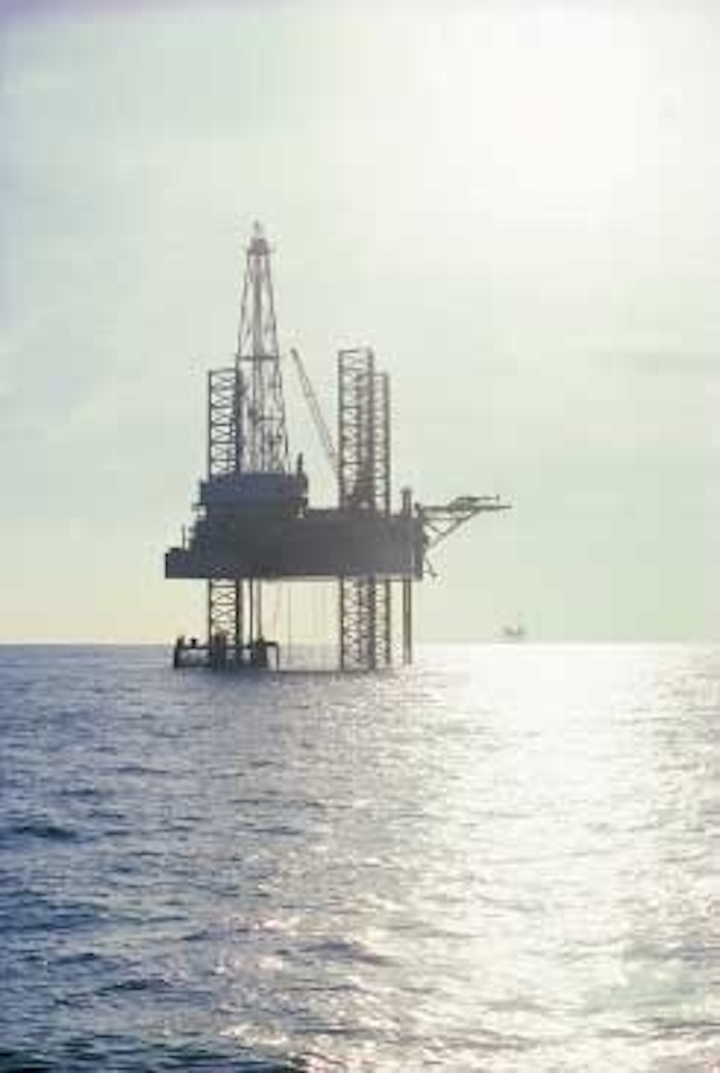 Oil and gas production from the Gulf of Mexico continental shelf is in decline, posing a challenge for the US Minerals Management Service (MMS), which regulates activity there. The decline also poses a problem for producers and pipeline owners, who have an investment in infra-structure and supply contracts.

To counter falling shelf gas production (although not the case in deepwater), the MMS has proposed royalty relief as an incentive for drilling deep gas deposits in the shallow water shelf area of the Gulf of Mexico by providing for royalty suspension for the first 20 Bcf of production from a well drilled 15,000 ft below sea level.

Shelf royalty relief for deep gas drilling, and more significantly, the number of leases expiring in 2001, will drive up drilling in the Gulf of Mexico in 2001. A total of 1,153 wells are projected to be drilled in 2001. This number would be up 16% from the total wells drilled in 2000, and up almost 42% from the number drilled in 1999 (see accompanying graph). The increase over 1999 figures is largely a result of the escalation of deepwater drilling, while the increase over 2000 figures will be partially attributable to interest in gas drilling.

But, that period may be coming to an end, unless deep drilling at the edge of the continental shelf, under and around salt bodies, turns up a great deal more oil and gas than producers expect. The MMS hopes to keep gas production from falling off precipitously, by providing royalty relief for those deep gas wells (>15,000 ft depth) to be drilled on shelf leases acquired in OCS Sale No. 178 on March 28, 2001. Fortunately, the Gulf of Mexico remains prospective at great depths.

By contrast, oil production, and to a lesser degree gas, in water depths beyond the 1,000 ft contour continues to escalate rapidly. Interest-ingly, in the 1983-1984 period, deepwater prod-uction began to rise, as a result of those fields producing on the slope just beyond the continental shelf.

Oil output slowed during the following years with the low price of oil. The cost of deepwater technology was high and oil prices in the late 1980s simply did not provide the support to undertake the risks.

During the early 1990s, however, technology began to meet some of the hurdle rates required, and deepwater became more prospective. As a result, deepwater oil production rose from 20 million bbl annually in 1990 to nearly 48 million bbl in 1994.

Most of the gas produced was associated gas from wells on the slope, very close to the continental shelf where gas pipelines were available.

After a period of little change, gas production shot up 125% or more during the 1997-1999 period, as a result of very large contributions from several gas only fields brought into production at that time.

Deepwater drilling will be fairly constant in 2001, since rig utilization for units with deepwater capability, is right at 100%. Several more rigs will be launched in 2001, adding slightly to well capability, but the long break-in time required for these giant units may not contribute significantly to drilling in 2001.

Gas reserves at true vertical well depths greater than 15,000 ft below sea level on the continental shelf are the target of MMS's royalty relief efforts. These reserves were initially overlooked by seismic imaging technology of 1970s and 1980s, or were left behind by producers searching for easily recovered oil and gas.

In addition, salt bodies complicated much of the drilling in the greater depths along the edge of the continental shelf. Wells drilled today beyond 15,000 ft total depth are likely to traverse near or have to go through salt bodies. In addition to much improved 3D seismic inaging today, drillers will benefit from technology critical to controlling bit direction and wellbore positioning. This technology caps the cost risk involved in drilling around salt. However, wells drilled to and beyond 15,000 ft total depth are likely to be fairly costly, although not as much as deepwater wells. Producers undertaking deep gas drilling (>15,000 ft) would receive royalty relief of $0.75/Mcf on gas priced at $5.00/Mcf, which calculated on 20 Bcf produced free of royalty would amount to $15 million. If unfettered by any time constraints, this would provide a huge incentive for deep gas discoveries.

For the producers, US natural gas prices in the $5-8/Mcf range are a strong incentive, particularly independents, who do the majority of gas drilling on the shelf. The problem with shelf gas drilling today is the rather small accumulations of reserves found and the resulting short production life span. The 1-3 year gas production life forces producers to maintain a very active program of tract acquisition, farming in, rig leasing, and platform re-use, in order to maintain pipeline injection quotas and cash flow.

At the same time, gas producers have to watch development costs for gas production carefully. If US gas prices plunge in the coming 6-12 months, producers could be stuck with producing high cost gas in a weakening gas price market.

Falling shelf production is critical for gas pipeline owners also, who must keep lines filled in order to meet contractual volume requirements. Gas from deepwater developments took regulators attention away from the growing shortfall in early and mid-2000, but the advent of a normal 2000-2001 winter and low storage volumes in the US have re-instated concerns that rolling curtailments will be necessary on distribution levels.

Not only will high oil and gas prices contribute to the projected $34.4 billion wellhead income net of royalty earned by producers in the US Gulf in 2001, but relatively low drilling and logging costs will contribute to that elevated income.

US Gulf crude oil reserves for 1998, the last year for which data is available, was estimated to reach 5 billion bbl. Reserves volumes would probably total 5-6 billion bbl by early 2001, as a result of the growing number of deepwater discoveries.

Natural gas reserves dropped steadily since the early 1980s and was estimated at 33 Tcf in 1998, the last year in which figures are available. That number is slightly higher than in previous years, but the lack of normal winter conditions has prevented a substantial drawdown on reserves. Gas reserves topped 45.8 in 1986, the highest point in gas reserves for the US Gulf.

Deep gas royalty relief as proposed by MMS will apply only on those leases acquired in Sale 178 in March 28, 2001, which are in water depths of 200 meters or less, and then only to gas reserves produced at true vertical well depths drilled below 15,000 ft from sea level.