Many, if not most, of the world's record-setting extended-reach drilling (ERD) wells have quite a lot in common. 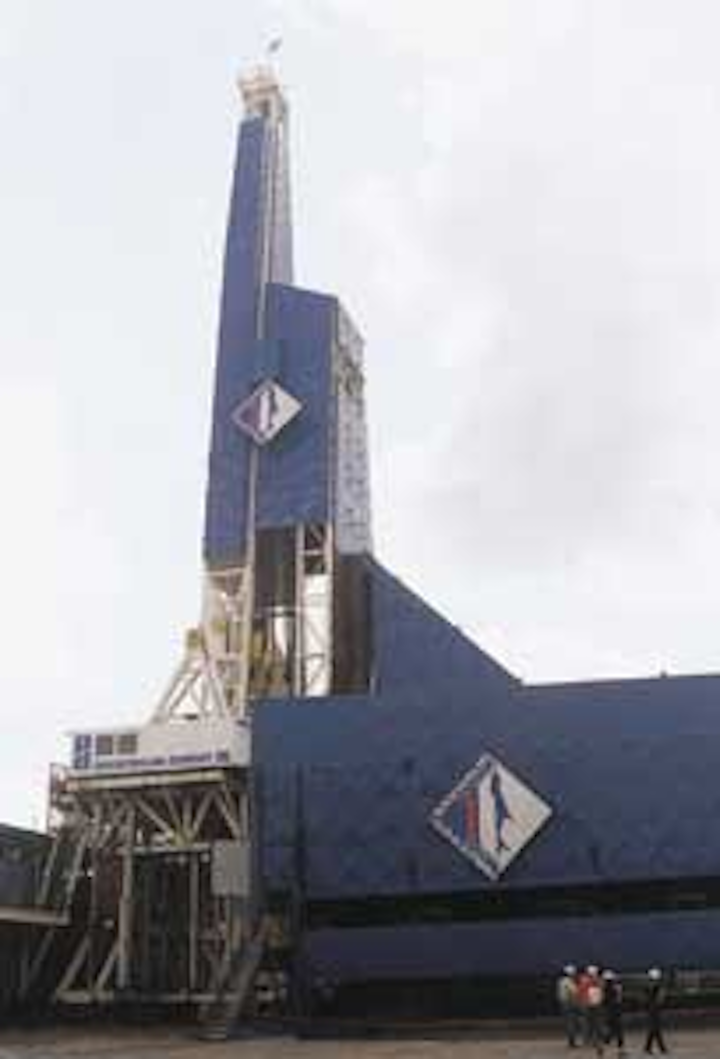 Exxon Neftegaz holds the current record in the Odoptu field, Sakhalin I

Many, if not most, of the world's record-setting extended-reach drilling (ERD) wells have quite a lot in common. However, success in achieving an extended-reach objective can be attributed to one thing – the ability to obtain and sustain control of the drill bit. The previous world record Maersk well in the Al Shaheen field offshore Qatar is a good example. The directional driller was able to send steering commands to the bit, and receive a confirmation code that the commands had been received and executed all the way to the final TD of 40,320 ft (12,290 m). Moreover, valuable real-time log data were transmitted to surface as the wellbore was landed successfully in the target formation. Directional drilling companies maintain the position that the only real limiting factor of ERD wells planned for the near future rests with this single point. As long as bit control can be sustained, the well can be drilled.

The present record-holder was drilled in January 2011 by Exxon Neftegaz in the Odoptu field, Sakhalin I with a MD of 40,502 ft (12,345 m). However, the circumstances under which this well was drilled differed markedly from the Maersk well. Odoptu is a large discovery extending under the Sea of Okhosk. To date, six of the world's longest ERD wells were drilled to exploit this field. By drilling the wells from a shore-based pad, many of the inhospitable aspects of the Sea of Okhosk can be avoided, and production facilities can be sited on land, making them more accessible for operations and maintenance. In the case of the Maersk well, sea conditions were benign. However, there was a strong desire on the part of the host country to develop the discovery with minimum environmental "footprint."

Over the years, various reasons have been cited in using ERD to access certain reservoirs. At the turn of the 20th century in California, for example, wells sited on Long Beach were drilled out under the Pacific Ocean to access reservoirs lying just offshore. Mostly, these wells targeted reservoirs that were simply extensions of onshore fields. Similar activities were used near Baku, Azerbaijan, to extend prolific onshore discoveries out under the Caspian Sea. But these were usually very short extensions by comparison, and most were drilled out of necessity because offshore drilling technology had not been developed at the time.

ERD in the modern age

The real scientific breakthrough of extended reach drilling can be traced to BP's 500 MMbbl Wytch Farm program in the 1970s. On England's south coast near Dorset, Wytch Farm was a multi-field development. Many of the fields extended under Poole Bay, a popular recreation area. BP undertook to develop the field with minimum environmental footprint, and its effort won it the Queen's Award for Environmental Achievement in 1995.

Commencing with Stage III of Wytch Farm development, the ERD drilling program's long reach wells set many records, culminating with the M16 well drilled to MD of 36, 992 ft (11,275 m) in 1999. Total offset distance for the M16 well was 33,712 ft (10,275 m), and true vertical depth was 5,340 ft (1,628 m). BP's spectacular achievement at Wytch Farm was attributed to many technological and technique developments. Chief among these was rotary steerable drilling.

Directional drilling of step-out wells was largely developed by the Russians, who deployed mud motors and steered using bent subs in sliding mode. But many of their achievements were cloaked in the secrecy that pervaded the Soviet era. We know that drilling pioneer Alexander Grigoryan drilled a nine-branch multilateral well in 1953, a remarkable feat in itself. However, despite his success, not many long step-outs were drilled, largely because axial friction in sliding mode robbed the drillstring of its potency to make hole. Because by nature rotary steerable systems (RSS) can steer while rotating, friction effects are greatly reduced. Along with the effective deployment of RSS, drillers learned how to model and actively manage torque and drag during drilling.

Another breakthrough was in the area of bit and bottomhole assembly (BHA) hydraulics. Not only were better drilling fluids with high lubricity developed, but dynamic well hydraulics were modeled so drilling techniques could be launched that controlled cuttings transport, to prevent the BHA packing off. A side benefit of improved bit hydraulics was more effective clearing of the toolface so valuable drilling energy was not squandered re-grinding cuttings.

The pioneer work on the Wytch Farm development introduced the concept of well construction, which is a way to integrate every aspect of building a successful well from surface location selection and preparation to drilling and primary completion. Among the lessons learned at the time was the fact that to construct a quality ERD well, success depended in large part on the quality of the vertical and initial build sections. Drilling service companies developed automatic RSS tools that could be programmed to drill a perfectly vertical (or perfectly deviated) surface hole without driller's intervention, providing a surface hole with minimum torque and drag. Build section trajectories were carefully designed to minimize friction and drill pipe torsion, reserving as much rig power as possible for the drill bit.

Another innovation from this period was the addition of a mud motor in line with the RSS, so bit rotation could be maintained at a high speed while the entire drillstring was rotated slowly. This reduced fatigue stress on the drillstring in the build areas.

In the time since the Wytch Farm Stage III development, many technical refinements have been made to enable drillers to extend their reach. They can be classified accordingly:

The cumulative value of the lessons learned was brought to the fore at Wytch Farm and continued at Sakhalin Island. There is no doubt that building on knowledge and experience from multiple wells drilled on the same structure is the most effective way to success. Specifically at Sakhalin Island, 15 of the world's 20 longest reach wells have been drilled there over a fairly short time period. The volume of drilling data allowed statistical anomalies to stand out and be discounted, whereas common experiences could be identified, quantified, and improved.

For example, the types and numbers of RSS failures experienced at Sakhalin pointed out serious shortcomings in system reliability. Service providers were able to address these, leading to an overall improvement in RSS quality and reliability that benefited all users, not just those drilling ERD wells.

Every aspect of well design fell under the scrutiny of ExxonMobil engineers who, together with their service partners, were able to focus on improvements in technology and technique to achieve their ultimate goals. No factor was left unexamined, from the rig design itself to the completion, because after all, what good is being able to drill an ERD well if it cannot be completed safely and effectively? One particular step that pays big dividends is to "drill the well on paper" before actually getting started. This technique, which was applied at Odoptu, can help identify the most egregious issues before they actually are met in the field.

The rig used for many of the Sakhalin wells was specially designed and built by Parker Drilling. Called "Yastreb", the rig incorporated many innovations, not the least of which was a horizontal pipe rack. With Sakhalin Island lying immediately to north of earthquake-prone Japan, no one wanted a top-heavy derrick structure full of drill pipe stands during a tremor. The current campaign has drilled nine wells. The rig favored a "batch" drilling approach whereby surface well construction could be performed on all wells in the plan at once, taking advantages of the efficiencies gained from repetitive operations and elimination of drilling fluid swap-outs. The batch mode extended from the 30-in. drive pipe through the drilling and installation of 24-in. surface pipe and the 18 5/8-in. casing string. The earliest wells were drilled mainly to gather critical reservoir and structure information to aid in completion design and the drilling of subsequent development wells. Basically, the reservoir is of Miocene age and consists of a large gas cap atop an oil ring. Wells had to be carefully steered to penetrate the reservoir in pre-identified sweet spots.

To optimize all drilling parameters, the well operators incorporated a unique workflow called the Fast Drill Process. Basically, the program identifies limitations to the drill plan so they can be addressed and eliminated or mitigated. Among the benefits of the process is the ability to model and extend drilling parameters so subsequent ERD wells can be designed intelligently, making maximum use of the lessons from preceding wells.

Minimizing vibration was a key consideration. Vibration, in any form, reduces the energy available to the bit for cutting rock, and taken to extremes can damage measurement-while-drilling and logging-while-drilling (MWD/LWD) tool components. Vibration has been identified in three modes – axial, or bit bounce; radial, or bit whirl; and torsional, or stick-slip. Each can have serious consequences. As a result, some MWD devices measure and transmit all vibration modes to surface in real time so drillers can take immediate steps to mitigate them. Among the most popular techniques is variation of downhole weight-on-bit, drillstring rpm, and equivalent circulation density (ECD).

The Odoptu-11 well was drilled in 60 days with less than 1% non-productive time (NPT). A sand management lower completion consisting of 5 ½-in. screens with inflow control devices (ICD) was run. Zonal isolation was achieved using external swellable packers. The upper completion followed, and consisted of 5 ½-in. tubing, gas lift mandrels and downhole pressure gauges along with a safety valve. Completion required an additional 10 days.

According to ExxonMobil, significant contributions to the well's success included detailed pre-job modeling that included "drilling the well on paper"; the purpose-built drilling rig; a well-trained and informed staff; and a global performance management workflow—the Fast Drill Process.

Plans have been announced to continue development of Sakhlin Island's offshore resources. Subsequent ERD extensions are expected to reach more than 42,640 ft (13 km). With a wealth of experience and a systematic approach, there is little doubt that they will achieve their objectives.