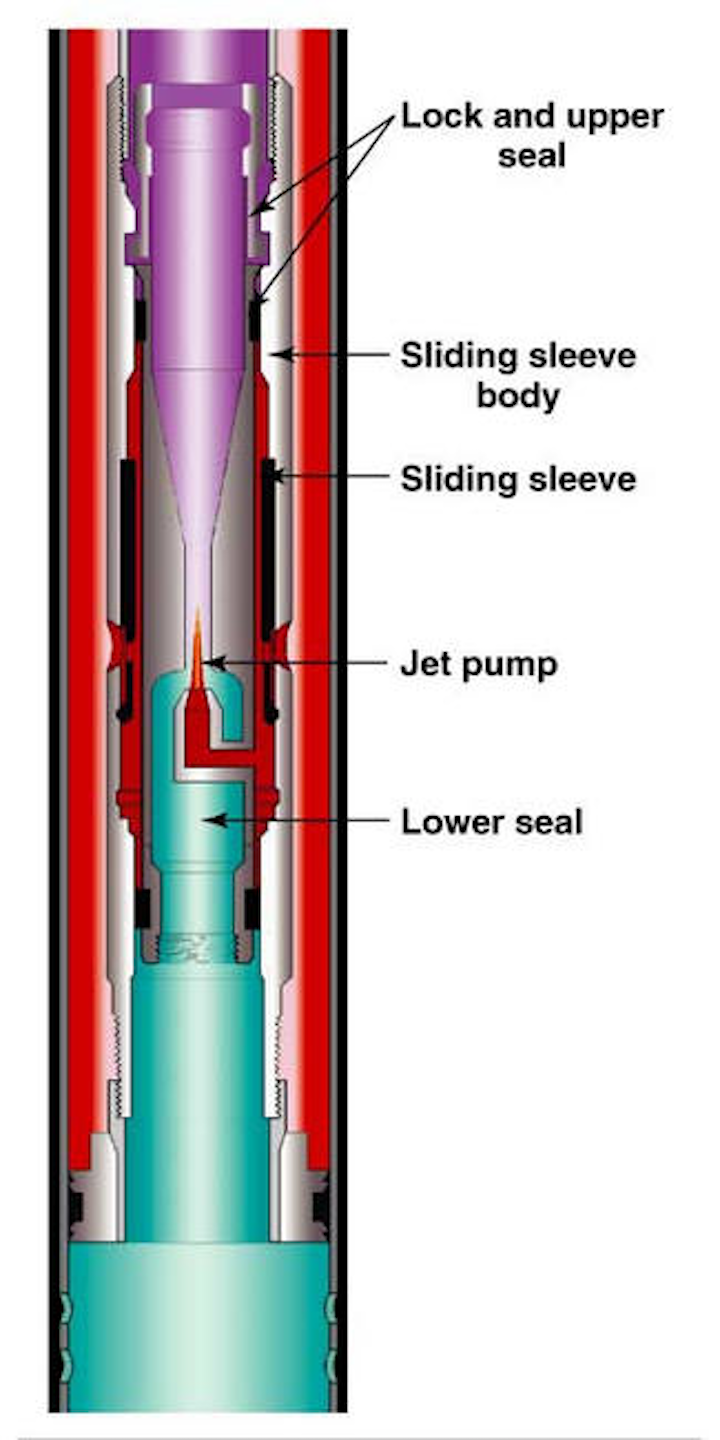 The widely used sliding sleeve jet (SSJ) pump for artificial lift has proven to be a viable option as a well testing tool, according to Weatherford. With this pump in the well test string, operators are able to gradually draw down well pressure to kick off the well.

By avoiding the sudden pressure changes of some conventional well testing methods, it succeeds where other methods often prove to be difficult or fail. This allows more controlled flow and removal of residual solids/fluids and may eliminate the danger of formation breakup and sand flow. Operators often encounter formations that contain hydrocarbons that do not flow under conventional well kick-off methods. The wide range of drawdown pressures available with the pump usually triggers flow from such wells.

This is a comparatively inexpensive tool and widely available with good deployment logistics in which technical service including computerized logging of test temperatures and pressures can be provided. In recent applications in the North Sea and in Alaska, this technology has allowed producers to bring in wells and conduct early production tests at a lower cost, time, and risk.

Following completion of a low-pressure well, flow is generally initiated by circulating out the fluid used for well completion. This "unloading" process removes the fluid from the wellbore (and from the reservoir if there has been drilling fluid loss) to produce the well. Methods in common use today for unloading the formation and beginning the well test, which share hazards and expense or both, are as follows:

Other methods that have been used include running a drilling motor and anchoring it while the drill string is rotated to pump the well, or even mounting a sucker rod pump on the drill floor.

Unlike these methods, this pump provides a very low cost method of well testing. Including a standard sliding sleeve in the well test string is all that is required. Mud pumps or cement pumps already on site can supply pumping power. The jet pump itself can be sent anywhere in the world by air freight. The unit then can be installed by wireline or "circulated in" (installed in the line and pumped into the test string, where it seats in the sliding sleeve).

Perhaps as significant as these factors is the flow control gained in bringing in the well with a jet pump. All the methods cited frequently draw the well down rapidly (nitrogen gas is perhaps more controllable), not gradually. The jet pump draws the well down gradually and progresses to a very high drawdown because it operates on the Venturi principle.

Shell UK Exploration & Production, operator of the Gannet GEO2 well in the UK sector of the North Sea, on behalf of Shell, Esso, and other co-venturers, provides the first example of benefits from this pump. The well was drilled in 4Q 2000 by the semisubmersible drilling rig Santa Fe 140. The well is a horizontal subsea completion with premium sand screens installed in the horizontal section, and will eventually be produced using an ESP. A drill stem test (DST), using the pump, followed installation of the sand screens.

Though jet pump DSTs have kicked off wells in the past, the Gannet goal went beyond that. The goal was to clean up the formation in a gradual manner to allow mud solids and sand smaller than the screen mesh size to pass through the screens without affecting the producing formation or damaging the sand screens (releasing sand into the well bore).

Shell Expro required that the mud filter cake left by the drilling fluid be removed in a controlled manner, ensuring no damage to the formation and to condition the sand screens (promote bridging behind the sand screens). On a previous well, Shell Expro had experienced a plugged sand screen while starting production using an ESP, due to uncontrolled drawdown.

Goals also required that the well test confirm the productivity index and demonstrate sand-free production at the highest achievable rate. The well productivity index (PI) was confirmed by surface flow measurements, in addition to memory gauges that were mounted on the bottom of the jet pump assembly and recovered with it. By meeting these goals, the test established the conditions for maximizing the life of the ESP pump. The assigned engineers oversaw running of the pump and setting in the sliding sleeve. They also advised Shell Expro on operating the pump during the DST.

A DST string incorporating pump model SSD was run in the well on slick line and locked in the SSD profile. Pump power fluid was pumped down the annulus using the rig pumps to operate the jet pump. Production and power fluid returned up the tubing string. The power fluid and production flow went directly to a separator for measurement, and then was sent to the flare boom.

The power fluid used to operate the pump is a light petroleum product used in the make-up of oil-based mud, called "baseoil." The baseoil blended with the heavy produced oil to improve flow characteristics/density, without creating large emulsion problems on surface.

Regulating injection pressure and controlling the backpressure at the production manifold on the surface controlled the production rate. Flow of well fluids was limited in the beginning and was slowly increased to maximum rate of 6-8 hours. The slow controlled increase of production across the sand screens achieved a slow removal of the mud filter cake from the sand screens and formation. The DST was successful in all respects.

Keith Hughes is the International Business Development Manager for Artificial Lift Systems in Europe and Africa.