Statoil's trial of the re-injection of produced water in the Heidrun Field has proved successful, and the company intends to introduce it on a full scale, assuming its partners agree. 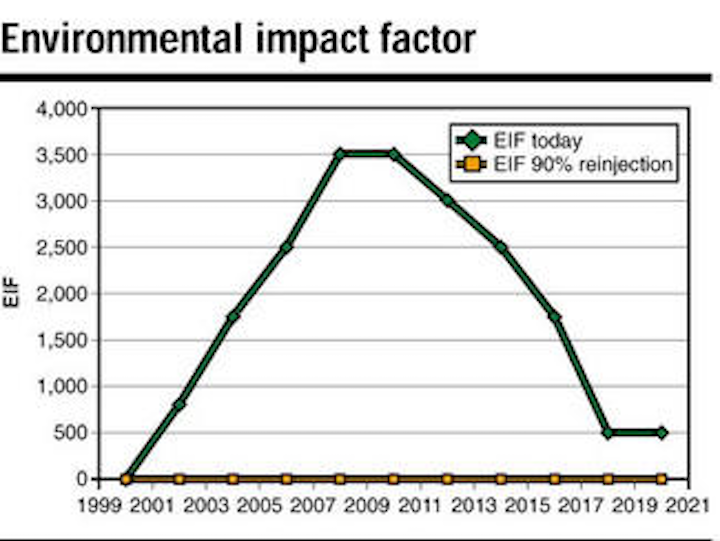 That is equivalent to about 60% of the daily production of water from the reservoir, according to Sten Paltiel, environmental coordinator for Heidrun. If partners Norske Conoco and Petoro, which hold the state's directly owned interest in the field, agree to Statoil's proposal - a decision is expected in October - in two years' time all produced water will be re-injected. The volume by then will have grown to 100,000 b/d, and will reach a peak in around 2010 of 200,000 b/d.

This solution is particularly beneficial for Heidrun as the reservoir contains a high content of barium sulfate, which reacts with seawater to create scale in production wells. On the other hand, produced water has a naturally low sulfur content, and its use for re-injection will allow the scale problem on Heidrun to be reduced to manageable proportions, Paltiel says. But as the need for water with low sulfur content is higher than the amount of produced water available, a sulfate removal plant will be installed as part of the solution.

Once separated out from the hydrocarbons, the produced water is passed through a sand cyclone - the only additional treatment it gets - before being pumped to the injection well. No additional pumping is required to inject the water.

Ahead of the pilot there were concerns that naphthenic acids in the produced water could precipitate out in the reservoir fluids, creating a problem of clogging in the reservoir and injection well, but there have been no signs to this effect.

Produced water re-injection is of interest to North Sea operators. Tighter rules on emissions are on the way, with Ospar discussing a reduction in the threshold for oil-in-water discharges to the sea from 40 ppm down to 30 ppm.

Statoil, together with Norsk Hydro and other oil companies, has developed a discharge model which can simulate the effect of discharges in field-specific situations. Simulations have shown that it is the lighter components of the crude, which are most difficult to remove from produced water, that have the most harmful impact on the sea.

Replacing discharge by re-injection avoids the problems associated with discharge, such as the capital and operating cost of the equipment required to clean up produced water.